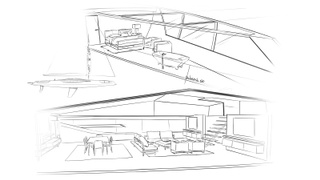 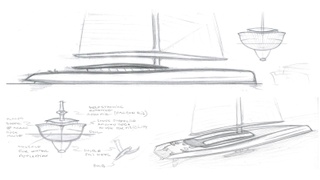 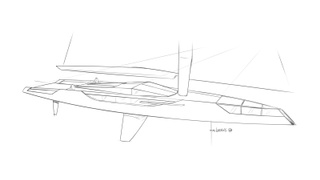 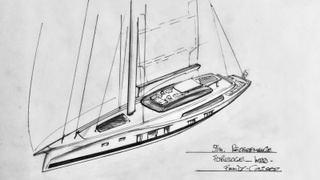 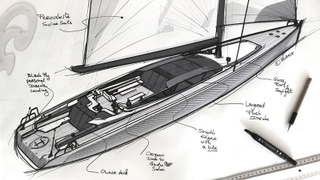 The second round of BOAT International’s online design competition has concluded with some incredible sketches from four superyacht design studios.

For the second round, the studios - Vripack, ER Yacht Design, Frank Neubelt Yacht Design and Facheris Design - were asked to dream up a sailing yacht concept according to a brief voted on by our social media audience and were given just 48 hours to submit their sketches.

The brief they received is outlined below:

In a twist, designers were asked to incorporate the band Guns N' Roses into the design, with the freedom to choose any add-ons from a long list of special features suggested by our social media audience, including underwater observation window, viewing platform, hydrogen power and crow’s nest viewing pod.

Ivan Erdevicki of ER Yacht Design dreamed up a 56 metre aluminium sloop with a self-rotating carbon fibre rig. “The starting point was the idea to design a yacht that I would like to have for myself with features and a look that I like personally. It is sleek and sexy, but powerful and very elegant in the same time.” Standout features include a double foil keel, flared hull topsides and a lifting propeller for speed and efficiency.

President of Facheris Design, Patrizio Facheris, created a sharp 60 metre design featuring extensive use of glass with a forward facing glass bow and a glass roof. Incorporating Guns N' Roses in to the design he said: “I tried different ideas like integrating a guitar shape into the mast and a guitar shaped window, but I found quickly this idea to be very tacky. I integrated the rose on the side as graphic and the music note into the sail and gun into the mast.”

Frank Neubelt said: “I appreciated the competition’s brief within the 40-60 metre range since midsize is actually trendier for several reasons, including the smaller number of crew required, easier handling and lower yearly running costs (compared to a 60 metre+)." Highlights of the 55 metre concept include a foredeck infinity pool and hull windows with a Jalousie system offering the option of under- or above-water views, while a single-handed, push button and hybrid sail system means fewer crew are needed.

Vripack named its concept 'Sweet Child' after the Guns N' Roses hit Sweet Child O' Mine which provided the soundtrack to their sketching. Vripack’s Marnix Hoekstra said: “We wanted to create some areas of privacy, but at the same time proper social spaces, and very safe areas on board to cross the ocean - that’s why we started with the split level idea.” At the aft of the boat sits a low owner’s deck with origami opening doors and a helipad made for a BlackFly personal drone. The cockpit and steering position sit above.

Voting took place over bank holiday weekend and the winner will be announced later this week.

Get the latest issue of BOAT International sent straight to your door.