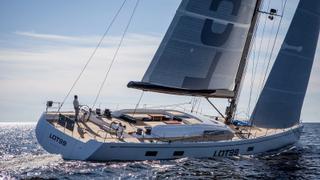 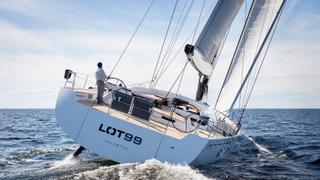 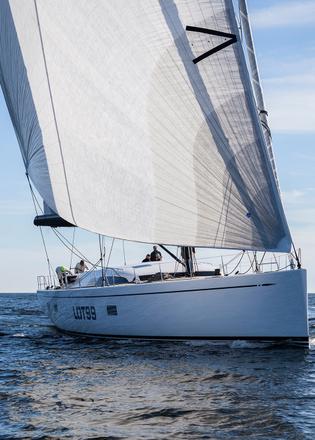 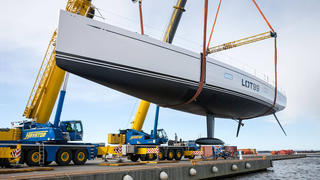 Finnish yard Nautor’s Swan has announced that the first hull in its new Swan 95 range of 28.8 metre sailing yachts, Lot 99, has left Pietarsaari bound for the Mediterranean.

Following her debut season, Lot 99 will be given a public debut in September at the 2017 Cannes Yachting Festival.

Exterior styling and naval architecture are courtesy of long-time Swan collaborator German Frers, with the aim of striking a balance between long-range cruising capability and high levels of on-board comfort.

The hull of the Swan 95 was built from a female mould using composite sandwich construction for the hull and deck for maximum stiffness, yet minimal weight. Twin rudders ensure that the Swan 95 is both responsive and easy to manoeuvre, while a lifting keel allows her draught to be reduced from 5.5 metres to 3.3 metres.

The yard unveiled its new design at the 2014 Monaco Yacht Show and the first hull was sold before the end of the year. There are two versions of the 95 — the S, with its semi-raised saloon; and the FD, or flush deck. Lot 99 features the former design.

Her modern, yet timeless interior was developed in collaboration with the experienced owners, who selected a harmonious blend of woodwork, colours and materials. Accommodation is for eight guests split across four en-suite staterooms, including an owner's cabin situated aft. Four crew can be accommodated in two further cabins. Key features include a protected cockpit that is ideal for al fresco dining and entertaining.

The Swan 95 joins the yard's extensive collection, which extends up to the 35.2 metre Swan 115 flagship, of which four have been sold. Other superyacht projects currently under development at the Finnish yard include the 23.99 metre Swan 78, with the first two hulls sold in December 2016.