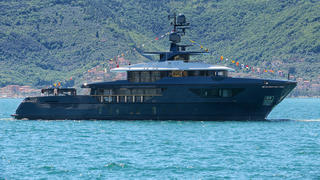 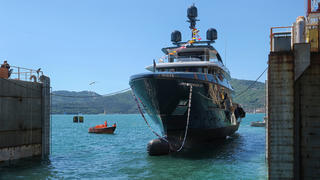 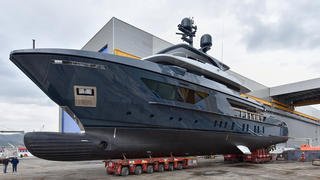 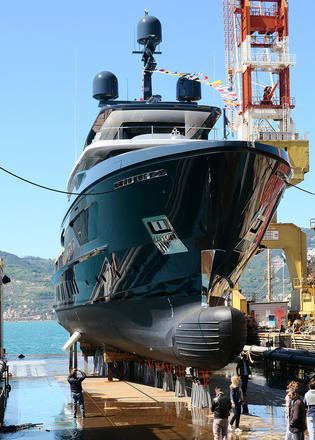 Italian yard Sanlorenzo has launched the third hull in its 42.2 metre explorer yacht series, which has been named Ocean’s Four.

Built from a steel hull and aluminium superstructure, the new arrival features exterior styling by Francesco Paskowski, while the naval architecture was developed in-house.

As with the previous hulls in the 460EXP series, Moka and X, Ocean’s Four features a total interior volume of 460GT (hence the series name), but differs from its predecessors in two key areas.

Firstly, the dark blue hull colour is called Graublau, and secondly the yard explained that the bulwarks have been lowered in order to allow for better views out to sea from the main saloon.

Accommodation is for ten guests split between five cabins, while the crew quarters allows for a total staff of up to seven people. The interior décor was created by Citterio Viel — marking the second collaboration between the yard and the studio, after the 2016 launch Lady Kathleen.

A vast tender storage space is available on the aft deck, suitable for carrying a submersible, sailing boat, or seaplane, while the sprawling superyacht sundeck is likely to be the heart of the action on board.

Power comes from a pair of 1,319hp Caterpillar C32 ACERT diesel engines for a top speed of 15 knots. When trimmed back to her cruising speed of 11 knots, Ocean’s Four will boast a suitably globetrotting range of 4,000 nautical miles, thanks to her total fuel capacity of 50,000 litres.

Other superyacht projects currently under development at the Italian yard include the flagship Sanlorenzo 64 Steel, which was sold last summer and is currently under construction ahead of a planned 2019 completion date.