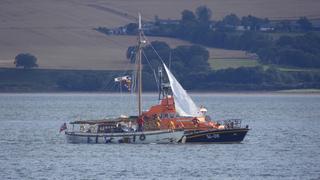 Since July 2015 two 71-year-old American yachtsmen have been attempting to sail their 12 metre yacht Nora from Scandinavia to North America. However, seven months later they still haven’t reached their destination, with an on board fire just the latest in a string of mishaps.

Bob Weise, a retired US army helicopter pilot, and Steve Shapiro, a screenwriter, got into trouble in Norway, Denmark, Scotland and Ireland, and they have now been rescued three times in Cornwall alone.

The Cornwall Fire and Rescue Service was called out to extinguish a fire on the yacht in Hayle, Cornwall, which reportedly started because she wasn’t tied up properly.

The sailors had gone off to buy provisions and Nora heeled over when the tide went out, knocking over a candle and starting the fire.

Only one week earlier Nora was towed into port by the Royal National Lifeboat Institution (RNLI) after suffering from a broken propeller shaft and battery problems.

The lifeboat was called out again when one of the men got into difficulty while attempting to reach the moored yacht in a rowing boat.

Other set backs they have encountered include: being saved from bad weather in the North Sea, being given a new battery by a Danish oil rig and running aground in Scotland.

The men do not seem to be phased by the issues and are still hoping to reach their final destination of Maine, USA, this summer.

"We're re-tying up in Hayle, some things have to be fixed, but the boat is fine," Mr Shapiro told BBC Radio Cornwall. "There was a candle which burnt some clothes, otherwise there was no real damage. Soon as we get northerly winds we'll go out."

The RNLI rescues an average of 24 people every day. The RNLI rescue of TV presenter Michael Buerk is just one of many celebrity sea rescues.

The American equivalent of the RNLI was also in action this week, rescuing 13 people from a 37 metre superyacht that sank off Florida.