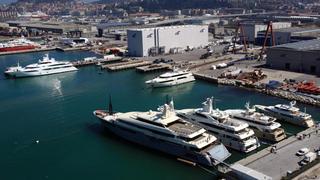 Two superyachts set to be launched this week at CRN yard

CRN has just released the news of two launches scheduled for this week: a Navetta 43 and Hull 130, a 60m superyacht.

Tomorrow will see the launch of the seventh hull of the Navetta 43 series, currently for sale through Burgess and listed on our website. The 42.6m superyacht will be christened Lady Trudy and will be the successor of the Navetta 33 built in 2008 by Custom Line.

This successful composite series has an exterior and interior design by Zuccon International Project Studio. Lady Trudy will accommodate 10 guests in a master suite with private balcony on the main deck and four double cabins on the lower deck. Special features include a lengthened upper deck to add space for a helipad, and her hull is painted in a majestic grey “pearl effect” colour making her easily distinguishable from her sisters.

This new Navetta 43 will be powered by twin Caterpillar C-32-C engines giving a maximum speed of 15.5 knots and a cruising speed of 13 knots.

Saturday 26th March will be the launch date of the CRN Hull 130, a 60 metre motor yacht. Built in steel and aluminium, Hull 130 has an exterior design by Zuccon International Project Studio. She will remind yachtspotters of Blue Eyes and Hull 128, respectively launched in 2009 and 2010. This third hull will be painted in a cream colour.

The monochomatic and minimalist interior is designed by Alexandre and Cristina Negoescu. It will accommodates 12 guests in five staterooms including a master suite with private balcony on the main deck.

Both yachts will be delivered this Summer.