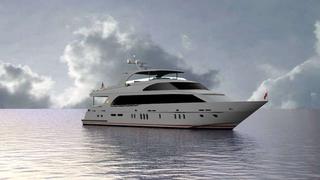 Update on yacht destroyed in fire at Kha Shing shipyard

As reported last Friday, a fire broke out at the Kha Shing shipyard in Kaohsiung City, Taiwan, damaging one of the yachts in build at the yard.

Only one vessel was damaged, a motor yacht underway for Hargrave Custom Yachts. 'This was the only fire in the history of Kha Shing and fortunately the fire systems in the systems in the factory helped to contain the fire until the Kaohsiung Fire Department arrived and extinguished the blaze,' says Mike Joyce, CEO of Hargrave Yachts.

The yacht that caught on fire was a new design for Hargrave, a 116 motor yacht, and it was 60 per cent complete when the fire occurred. The yard was in the process of installing the carpentry on the lower and main decks. The Hargrave 116 yacht has a five-stateroom layout and, 'has a lot of what people loved in our 125-foot Hargrave we introduced last year at a reduced size and on a faster hull platform,' Joyce reports. 'Working together with designer Jack Sarin and Caterpillar we have fine tuned this design by shape and weight to offer maximum performance using the latest Tier 3 version of the 1900 HP Acert Series engines.'

Hargrave tells Boat International that the owner of the yacht has already authorised the builder to proceed immediately with a replacement boat, and Hargrave will begin moulding and lofting the superstructure later this week. Construction time is projected to take 14 months.