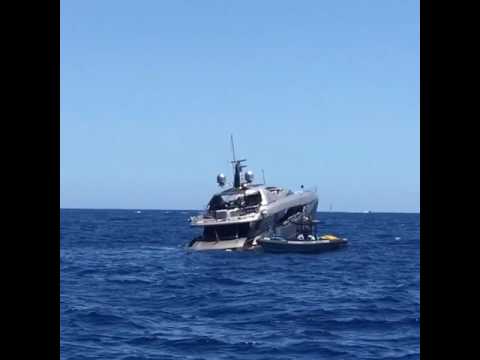 The 37 metre Peri Yachts superyacht Fusion has been filmed taking on water off Ibiza amid reports that it was sinking.

This short clip emerged earlier today (July 19) and footage of the incident was quickly shared on social media.

As this video shows, the transom is sitting unusually low, although the cause of this is not immediately apparent, with the hull seemingly intact above the waterline.

No injuries were reported and the local emergency services arrived on the scene before the yacht was completely submerged by the waves.

In the video, a smaller boat can be seen attending to the sinking superyacht, however it is not clear whether or not this is the tender or a passing powerboat.

Local news provider Diario de Ibiza adds that eight passengers were successfully rescued from the yacht, although the captain stayed on board and was assisted by two crew and four divers in attempting to keep the vessel afloat.

Launched in 2012, Fusion is a fast planing yacht that features styling inside and out by Scaro Design. Accommodation is for ten guests and seven crew, with a total interior volume of 280 gross tonnes.

This news comes in the same week that a tender crashed into a superyacht that was moored in Ibiza.