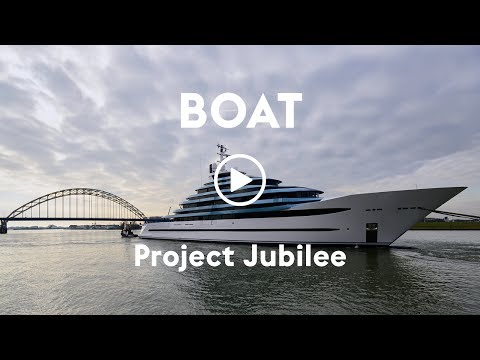 One of the most hotly anticipated new yachts of 2017, the 110 metre Jubilee has left Dutch yard Oceanco and begun her maiden voyage.

"The design is from Igor Lobanov,” Cic explains. “His idea was to do something slightly unconventional — to create something much more visually striking from the outside.”

Dance reveals that the plans for Jubilee’s debut season include cruising the Western Mediterranean, however that is by no means the full extent of her ambition. “She is fully ready for worldwide cruising,” the captain adds.

Currently offered for sale with Burgess, Jubilee features accommodation for 30 guests split across 15 cabins. Her interior is by long-term yard collaborator Sam Sorgiovanni and comprises a total volume in excess of 4,500GT. Key features include a superyacht helipad on the foredeck, with a tender garage beneath, and a large swimming pool, aquarium and beach club back aft.

Her steel hull and aluminium superstructure were built to PYC standards, while MTU provided the twin-screw diesel propulsion system. She is capable of a top speed of 18.5 knots, something that was proven by Jubilee's recent sea trials off the coast of the Netherlands.

Other superyacht projects currently under development at the Dutch yard include the 105 metre sailing yacht Black Pearl, which is due for completion later this summer.