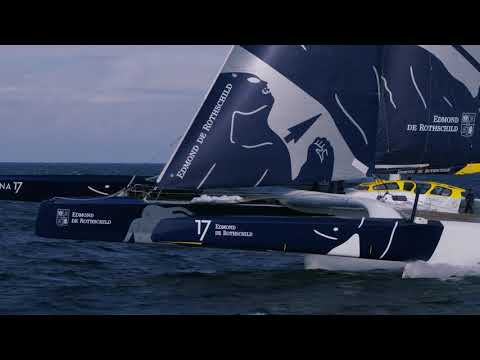 Sailing team Gitana has released an on board video showing its new 32 metre maxi trimaran Edmond De Rothschild flying on her hydrofoils. As the footage below shows, all three hulls were lifted clear of the water on her sea trials despite weighing a total of 15.5 tonnes.

Speaking after a successful day on the water, Sébastien Josse of Gitana said, “We immediately saw that the boat was keeping her promises: stiff and safe and begging to unleash her power. The first time the boat took off was an incredible moment.

“We had 15-17 knots of breeze and flat seas, with waves of less than a metre — everything was in place to fly. Aboard the boat there was a mixture of excitement and surprise, as well as pride,” he added. “Even though we're only at the start, it's hugely satisfying to see that we're heading in the right direction.”

Launched back in July in the French port town of Vannes, Edmond De Rothschild has spent three years in development. Continuing their family’s sailing legacy, namesake descendants Ariane and Benjamin de Rothschild were involved in the fit-out stage.

Built for speed, she lacks the creature comforts found on a multihull superyacht, but with an LOA of 32 metres, Edmond De Rothschild is the largest purpose-built foiling trimaran in the world — and more than double the length of the AC45 racing catamarans that competed at the America's Cup in Bermuda earlier this summer.

The ultimate aim is that Edmond De Rothschild will singlehandedly circumnavigate the globe in 2019-20. Before then, the team has set the intermediary goal of racing in the 2017 Transat Jacques Vabre, which departs from Le Havre on November 5.

Foiling technology was thrust into the global spotlight in 2013 during the 34th America’s Cup in San Francisco and with the format of the 36th America’s Cup still undecided it is likely that the Royal New Zealand Yacht Squadron will be watching these developments with great interest.