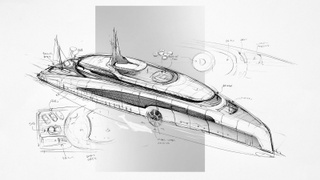 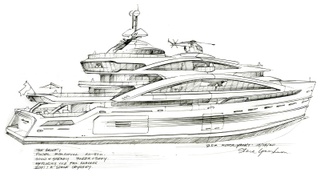 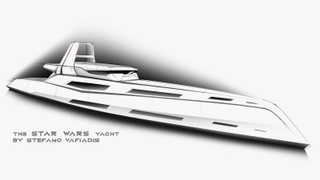 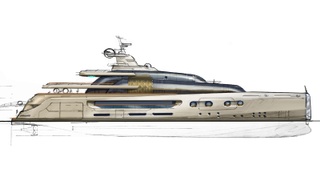 Vote for the Winner of our new Online Design Competition

The first round of BOAT International's new online design competition has concluded with some incredible sketches coming in from four leading superyacht design studios.

Over the weekend of 11-12 April, polls were launched on our Facebook, Twitter and Instagram channels, asking users to refine a brief that each of the studios had a little over 48 hours to interpret in sketch form.

The brief they received is outlined below:

Gresham, whose recent design credits include 87m OceanXplorer, said: "The challenge was to try and put some innovative ideas into the design rather than just make it a styling exercise – the yacht has all the features that a superyacht should have – pool on the aft deck, large tenders, subs, a hydrofoil, spa area, etc, but it is also a capable vessel and I hope that people like the features."

Rob Armstrong, creative director of ThirtyC, designed a sleek explorer with the "ultimate disco deck" and a Star Wars-inspired hull window that extends below the waterline.

Studio Vafiadis also introduced some Star Wars styling into its design. "It has been very challenging and very fun too. The brief was one of the most exotic I’ve ever had!" said Stefano Vafiadis.

Lastly, JQB Design dreamed up a 79m concept with "spaceship-like" round windows in the hull panel of the fold-out master suite terrace, and a moon pool inspired by the HAL 9000 AI computer from 2001: A Space Odyssey.

Each of the four designs will now be presented to our social media audience, which will vote on a winner. Make sure to check our Facebook, Twitter and Instagram channels this weekend to register your vote.

We will be launching further rounds of the design competition in the coming weeks.