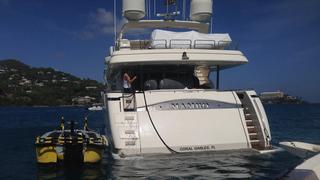 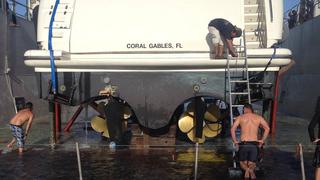 Mambo, registered at Coral Gables, Florida, was towed to Subbase Drydock in Crown Bay by marine assistance company Sea Tow after her propeller and rudder penetrated her fibreglass hull when she hit Packet Rock.

Captain Alan Wentworth of Sea Tow said Mambo was “dead in the water”, her batteries submerged and steering lost.

A post on Sea Tow’s Facebook page said there was “5ft of water in the garage and going into the engine room through the not so tight water tight bulkhead”.

Afterwards Captain Wentworth said: “She was taking on a lot of water. We had three pumps in it and had a diver underneath her to put in patching.”

A team from Sea Tow has continued to pump water from Mambo since the accident on Wednesday.

Mambo was built in Italy by Ancona-based Ferretti in 2003. She was designed by Gianni Zuccon; the naval architect was CRN. She has twin MTU 12V4000 diesel engines powered with zero speed stabilisers that produce a top speed of 30 knots and a cruising speed of 27 knots.

She has capacity for eight passengers and five crew.

She has undergone an extensive refit and Mambo is now sale for just under $5,000,000.