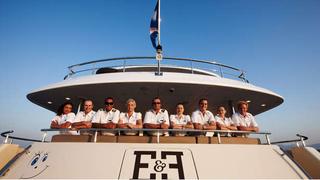 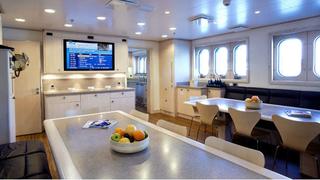 The saying ‘Happy crew, happy ship; happy ship, happy owner’ is often heard around shipyards and designer’s offices, but the challenge lies in making this truism come true. One sure-fire way is to expand the crew’s living spaces on board – an enhancement that will be mandatory on many superyachts when the Maritime Labour Convention, 2006 (MLC) comes into effect. But some yachts have taken the initiative to provide exceptionally accommodating crew spaces before any regulatory agency requires it.

‘As a shipyard we try to set as high a standard as possible for the spaces where the crew sleeps and leisures,’ says Michael Breman, Lürssen Yachts’ sales director. ‘Our boats are larger, and therefore it’s easier to lay out a boat in a proper, professional way.

‘Some owners are more generous than others…” he adds, citing the 83.5m Lürssen Northern Star, launched in 2009. She has a two-deck crew area that incorporates a crew mess and lounge on the lower deck and a private crew gym on the tank deck.

‘What’s special about Northern Star is her owner. He wants to be sure that the crew is happy; that way he keeps his crew,’ Bremen says. ‘He doesn’t want to see new faces all the time.’

Another owner known for his attention to crew comfort is Dennis Washington, who recently transformed the 91.75m Evergreen into the 100m AttessaIV, winner of the 2011 World Superyacht Award for Best Rebuilt Yacht. According to Attessa IV’s captain, Ted McCumber, her crew spaces were enlarged substantially during the rebuild.

‘We actually took away some of the guest areas and made nicer spaces for the crew,’ he says. ‘We spend a lot of time at anchor; without the space we’d go nuts because there are not that many places we can tie up to.’

When Captain McCumber and the owner toured the crew accommodations on Evergreen prior to starting the rebuild, they immediately decided to change the configuration of the cabins.

‘A lot of the staterooms had three bunks, and the boss said, “There’s no way we’re going to do that,”’ says the captain.

Attessa IV accommodates her officers and chef in private staterooms and also has individual cabins for her therapist, pilot and two staff supernumeraries who may come aboard.