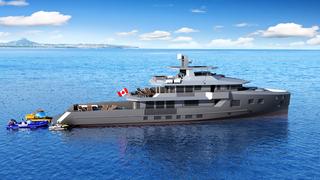 The new All Hemispheres Ocean Rover from Bray Yacht Design and All Ocean Yachts is an explorer yacht concept fit to carry all of the top water toys you’d expect to find on a luxury yacht.

However, Canadian yacht designer Patrick Bray is quick to point out that the Ocean Rover is not merely a “follow behind” vessel. The highly engineered 40.5 metre superyacht is equally well suited to carry an arsenal of toys, fast tenders and day boats for the mothership as she is to be a stand-alone explorer yacht.

So much so, in fact, that All Ocean Yachts is collaborating with Bray Yacht Design to develop the yacht into successful charter vessel. Also in on the collaboration is Winston Clarke, who is the former captain of successful world-roaming charter yacht Big Fish, Kirschtein Design and D2 Project Management.

Much like 45 metre superyacht Big Fish, Ocean Rover is being designed with long-range cruising in mind, offering charterers and scientific researchers the chance to explorer remote destinations.

The highly customisable design is based upon the fuel-efficient F.A.S.T. hull platform developed by Bray. Ocean Rover will boast a suite of other eco-friendly features, including a TESLA battery power system that reduces the dependence on large generators and solar power.

The exterior is defined by large windows, giving great views of the far-flung vistas outside, and the owner’s deck enjoys a prime location behind the bridge. The flybride hosts a hot tub and sub pads, and the centre of the flybridge can be enclosed and heated or cooled for use in “all hemispheres” as the yacht’s name suggests.

But getting back to those toys – the versatile Ocean Rover yacht could carry a submarine, 9.5 metre tender, secondary tender up to 7.3 metres, Jet Skis, windsurfers, and kayaks. This makes the Ocean Rover an ideal base for taking part in all the new extreme watersports that all are the rage. For the avid fishermen, she could stow a nine metre sportfishing yacht and still have room for more support craft.

When the fleet of tenders and toys are deployed, the deck is transformed into an al fresco lounging and entertaining space. Fold-down glass balconies off port and starboard on the main deck extend the deck space. The yacht can also host a helicopter landing pad for easy access as Ocean Rover roams the globe.

The best 6 superyachts with submarines