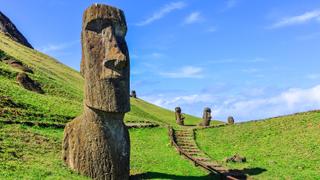 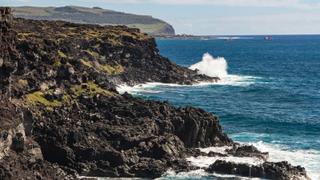 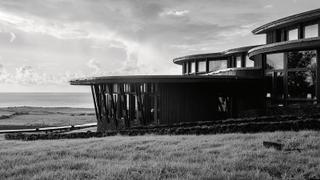 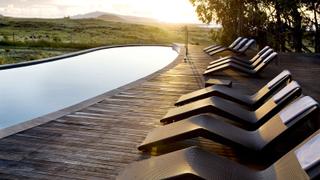 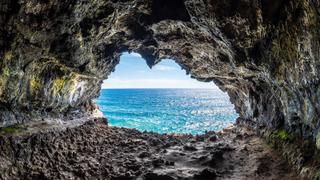 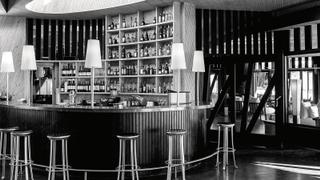 Cast away: The wild wonder of Easter Island

“Close your eyes and hold my shoulder,” says Tavi, my guide. We’ve been walking steadily uphill for the past two hours. The sun, radiant at its midday height, breaks through the clouds and warms my neck. Wind sweeps up from the crashing waves far below and my jacket billows in its force. Tavi stops with a jolt. “OK, you can open them now.” Carefully lifting my eyes, I see the might of Rano Kau, Easter Island’s largest volcano, spread out in circular perfection as far as the eye can see. I’m dumbfounded, in utter awe; a sensation I experience time and time again while on this island.

At just 163 square kilometres and situated 1,990 nautical miles o the coast of Chile in the South Pacific, Rapa Nui (Easter Island) is a UNESCO World Heritage Site and a treasure trove of spectacular subtropical landscapes. Formed when ocean volcanoes erupted near the East Pacific Rise as recently as two million years ago, it boasts an incredibly diverse range of flora and fauna.

Despite its remote location, some expedition yachts have made the stop-off during tours of the South Pacific or after visiting the Galápagos Islands – including 50-metre Plan B and 63.4-metre SuRi. “You can do the long passage from Chile, but most pass through from the Panama transit,” says Plan B’s former captain Ian Garaty. “It has a lot of appeal because it’s so off the beaten track.” But it also presents some logistical challenges. “There are various anchorages around the island, but they’re all weather dependent,” adds Garaty. “The west, and the capital Hanga Roa, offer the easiest tender access.” And even though it is far outside the South Pacific hurricane zone, Rapa Nui is still a small island in a very large ocean: you need to keep a constant eye on the weather and make sure the boat is safe and crew are aboard. Easter Island is an adventure destination, after all.

The island may be remote but that doesn’t mean that luxury can’t be found. Five-star Explora Rapa Nui propagates the growing demand for intrepid luxury travel, where time spent outside the hotel is more important than time spent inside. This concept is at the heart of the enterprise, with 30 excursions on offer, but the hotel itself is also a wonder of design and luxury. It crosses the line between rugged island retreat and New York chic, where wooden panels are juxtaposed with unfinished concrete to dramatic effect. In addition, huge foor-to-ceiling windows over panoramic views of the vast breaking waves of the Pacific. Rapa Nui’s oldest volcano, Poike, on the easternmost tip of the island, can even be seen from the hotel’s pool and hot tub.

In addition to its aesthetic credentials, Explora has 12 guides who will lead you into the unknown on any excursion of your choice. “As a guide, it is the de nition of an enjoyable job,” says senior guide David Torres. “Explora is an experience; it’s a basic but very deep idea to get outside and explore, and Easter Island is such a unique place to do it – you can’t compare it to anywhere else.” It has also grown to accommodate the superyacht community. “In the past, guests have own from their yachts in helicopters and can land here at the property,” he adds. “It’s rare, but it does happen.”

Of course, Easter Island is most famed for its moai – monolithic human gures carved by locals between 1250 and 1500. One of the most popular excursions is the gentle six-kilometre walk around Rano Raraku volcano, the ancient quarry site, where some 400 moai still remain in various forms, from partially carved to complete. It is said that the moai were built to embody the spirit of the deceased and erected to guard the tribes across the island. At almost eight metres tall and weighing up to 55 tonnes, it is still unknown how the moai were ever transported. Even though I, like most, have seen hundreds of images of the moai throughout my life, the impact of seeing them in reality is a humbling experience.

Many of the moai remain in the quarry but there are a further 500 dotted sporadically around the island. Indeed, it’s nigh-on impossible to travel anywhere without seeing one. On the 23-kilometre bicycle ride that takes you from Explora, along the rough south coast and on to the swimming spot of Anakena, you pass Ahu Tongariki, where 15 moai have been re-erected to show how they once would have appeared. It is miraculous to behold, and part of a gentle excursion that o ers you the chance to cover the entire eastern tip of the island in just a few hours. It’s also remarkable to see how drastically the seascape can change in such a short period of time. The south coast reminds me of the Scottish Hebrides; rough, wild and unrelenting, yet just two kilometres away lies Anakena, the calm, Caribbean-like bay with palm trees, golden sand and crystal-clear waters – one of the most popular superyacht locations. “Most anchor down in town, or over at Anakena,” says Torres. “These are the two most sheltered spots on the island.”

Rapa Nui’s vivid, rich and often brutal history is also fascinating to discover in more detail, and this is where the guides outdo themselves. Most of them are native to the island, and all are immensely proud of their surroundings and ancestral heritage. They regale me with stories of famous battles, anecdotes and the history of how the island itself came to be. A highlight is the tale of the life-or-death Birdman ceremony, a hyper-intense triathlon-style competition to retrieve the egg of a sooty tern on Motu Nui, a small island two kilometres out to sea. It’s almost impossible to fathom that humans ever swam across such a rough section of sea and survived.

A half-day excursion to the Ana Kakenga cave systems on the south of the island o ers a glimpse into its geological past. Climbing through narrow holes in the ground, you nd yourself in the dark, wet expanses of a huge cave system, one created by lava burning its way through rock in search of escape. Follow the caves further and you abruptly nd the lava’s exit point; through the nal layer of rock and into the ocean below. You can even see some of the solidified lava beneath the violent waves.

The adventures don’t stop there. You can cycle up to Maunga Terevaka, the highest point on the island. Once here, you’ll be on the tallest peak for 2,000 kilometres, with an unobstructed 360-degree view over the island – the descent, I can assure you, is well worth the gruelling climb. You can also embark on the 17-kilometre Miru walk across Hanga Oteo, the King. It’s nothing but wild horses, fallen moai and the occasional palm tree. “You’re on the remotest part of the remotest inhabited island in the world right now,” my guide Teata reminds me a few hours into the hike. From there you can head fully off-road and mountain bike up and over Poike volcano and along the cliff-line down to Ahu Tongariki.

When you do feel like relaxing, which you will want to do after eight hours of physical exertion, you can do so in Explora’s pool, sauna or massage house. As well as luxury relaxation, Explora naturally creates a feeling of community. You inevitably meet other guests while out on the excursions, and by spending hours upon hours together, you begin to chat, joke and laugh. Guests often meet for drinks at the hotel’s bar, or even choose to eat supper together; the personal element is rare to experience when travelling and heightens the special feeling of this location.

Easter Island is a destination of absolute charm and wildness, and a hyper-exclusive travel destination for the superyacht community. “The locals are super welcoming and yacht visitors are a special and welcome addition,” Captain Garaty says. Adventure is the new frontier of superyacht travel, and locations that truly embody the luxurious without losing the remote wildness that made them special in the first place are few and far between; Easter Island has it all. “It’s a small island in a big ocean, with a big heart,” adds Garaty. “It’s a very special place.”

3 of the best remote destinations to visit by superyacht