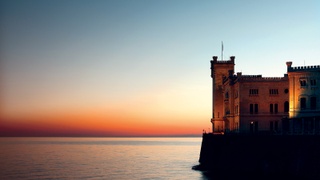 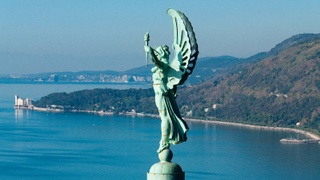 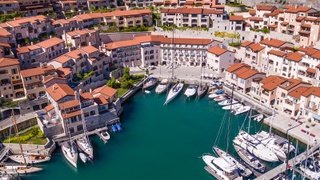 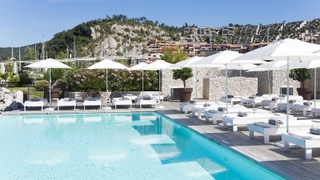 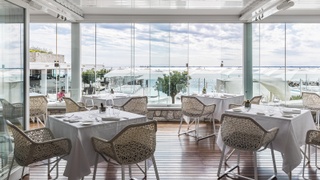 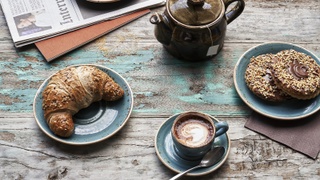 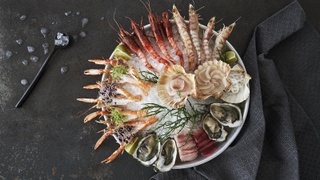 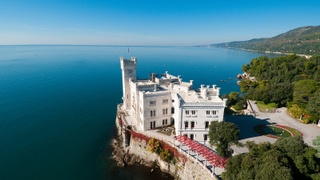 Thinking of taking a superyacht holiday this Autumn? With a new yachting hub and a blossoming food and wine scene, Sophia Wilson recommends the Adriatic Coast of Northern Italy as your next cruising destination.

I jump off the tender into the clear emerald waters and swim towards the craggy shoreline, crowned with a clifftop castle. With the bright white RIB behind me as I paddle, greenery cascading down the flanks of towering cliffs that surround us, the scene is reminiscent of the famous Dolce&Gabbana advert shot in Capri’s Faraglioni. Apart from the absence of David Gandy in white Speedos, the only differences are that while the sea in Capri is an iridescent blue, the Adriatic Sea on Italy’s northern coastline glimmers green; and unlike the packed waters surrounding the Amalfi Coast, we are the only boat in sight.

It’s hard to fathom why more superyachts aren’t spotted in this north-east corner of Italy, its rocky coastline dotted with castles and rolling hillsides patchworked with vineyards. “I suspect the main reason is the distance away from the main cruising areas of Croatia and Montenegro,” says Captain Andrew Beattie of 50.3-metre Resilience, which is available to charter with Camper & Nicholsons. It’s more than 300 nautical miles from Dubrovnik to the most eastern Italian city of Trieste, but it has plenty to offer those who make the trip.

“We only have 10 or 20 superyachts visit a year,” says Francesca Pitacco, a former international sailor who is now president of the regional Association of Tour Guides. “If you are coming from southern Croatia it is a long way, but it’s only 60 nautical miles from Venice to Trieste.” For sailors, the region has the added allure of the Barcolana regatta, which takes place on the second Sunday of every October in the Gulf of Trieste. Last year saw more than 2,500 yachts take to the waters in one of the most crowded races in the world. “The area is perfect for an end-of-season cruise, especially if you also want to go to the Venice Film Festival, but we need to put this area on the map,” adds Pitacco.

One destination that is aiming to do just that is the new resort of Portopiccolo, which was completed in 2017. Located between Miramare Castle and Duino Castle, it has been built inside an abandoned quarry that was first operational in Roman times, and a 120-berth marina, created by deliberately ooding part of the excavated land, sits at its heart. Designed to mimic a traditional Italian village, it has more than 400 privately owned houses and apartments and those not staying on board can check into marina-facing hotel Falisia, which is part of the Luxury Collection. The pedestrianised streets are lined with restaurants, boutiques and a vast sea-facing spa by Bakel plus two white-parasol-lined beach clubs along its seafront – it’s the complete yachting package.

In addition to its boat credentials, Portopiccolo’s bevy of restaurants also means it’s an ideal stop-off for sampling local produce, including the glut of local wines that are cultivated in the surrounding hills and just over the border in neighbouring Slovenia. At Falisia Resort’s Cliff restaurant, where the private patio offers views of the yachts gently bobbing in the marina, I am treated to a pairing where all the wines have been produced within a 10-kilometre radius of the property. The range is astounding, from a sparkling Ribolla Gialla, to an organically made Vitovska (one of the most prevalent local grape varieties) and even an orange wine. Increasingly popular across Europe, orange wines are created when the skins of white grapes are left to ferment with the juice, as they would be for red wine, adding colour and tannin.

For an even closer look at local wine production I head inland to the rolling wine territories of Collio. Here the many wineries are linked by the 50-kilometre La Strada del Vino Friuli that can be followed by bicycle, electric bike or Vespa (depending on your tness level). One picturesque stop-off is the Castello di Spessa, a private castle that dates back to the 12th century and which once hosted Giacomo Casanova. Set among vineyards, manicured gardens and an 18-hole golf course, the terracotta-hued castle still has its 13th-century two-level wine cellar. Its curved walls, lined with barrels, are now predominantly home to the current owner’s private collection but they serve as an atmospheric tasting venue for some of the 450,000 bottles that are still produced annually by the estate.

Aside from wine, the main draw of this area is the region’s capital Trieste, nicknamed the small Vienna on the sea. It's less than eight nautical miles from Portopiccolo, so yachts can moor right at the centre of the city and just a short stroll from the Piazza Unità d’Italia, Europe’s largest waterfront square. Surrounded by Slovenia, Trieste was once the great port of the Habsburg Empire and its seafront is lined with neoclassical architecture, while the old city higher up the hill is scattered with Roman ruins. With influences from Latin, Slavic and Germanic cultures, Trieste proudly runs to its own rhythm. Many shops close from 12.30pm to 4pm so that people can head to the long sandy beach promenade (as a local if you don’t have a suntan by March you are doing something wrong) and its inhabitants are said to drink twice as much coffee as other urban Italians, lingering in the smattering of coffee shops that surround the quaint squares and canal (it’s also the home of Illy roasting company).

I spend a happy few hours wandering the streets with Pitacco, taking in historic sites that include the ruins of a Roman theatre, the 18th-century Greek Orthodox Church of San Nicolò, and Caffè Tommaseo, the oldest coffee shop in Trieste that was founded in 1830. However, she explains that while being proud of its history the city is also undergoing a changing of the guard with young entrepreneurs creating a new energy. One of these pioneers is Chef Matteo Metullio, who I meet under the red awning of Harry’s Piccolo Restaurant on the Piazza. The 30-year-old had been awarded two Michelin stars at La Siriola in the Dolomites but returned to his home city in April 2018 to take the reins of this Trieste establishment. Less than seven months later the restaurant was awarded the city’s rst and only Michelin star. “I have a dream, I hope to come back with two stars,” he says. “Being awarded the Michelin star was very important for us but it’s not a competition. When I worked in the Dolomites people came to the area for the restaurants and Trieste can become that.”

This culinary movement is also happening 15 nautical miles across the bay in the lagoon town of Grado, which in turn is nicknamed little Venice. Its waterfront is famed for its prime passeggiata (evening stroll) but it also comes alive for an annual food and wine festival – Friuli Venezia Giulia Via dei Sapori (or the dinner show). The best chefs of Friulian cuisine line the waterfront cooking a variety of delicious nibbles from miniature cooking stations. And, of course, to wash it down, 22 winemakers and distillers also showcase their best offerings. The entire event is a sensory overload with sunset providing the perfect backdrop to the frenetic activity of the chefs and chicly dressed locals.

Armed with a lanyard specifcally designed to hold a wine glass (you need to be able to keep your hands free for scoffing) I bounce between the different stalls. Some delicacies on offer just showcase local produce, such as prosciutto di San Daniele, which is the local rival to Parma ham. Other stalls show off the talents of local chefs with dishes such as mushroom mousse served with marinated mushrooms and rabbit-filled lo pastry, squid ink risotto and gelato. The common theme behind the whole event is the personal story behind the products. I meet the father-and-son team who are producing some of the region’s best smoked trout and smoked salmon from their freshwater lakes. The eco-friendly business started by accident when the proprietor’s father, Giuseppe Pighin, bought some trout for hobby fishing and then realised how they flourished in the local environment. Many of the wineries are also a family affair. The Livio Felluga brand is now under the guardianship of the three sons of the founder Livio, who died in 2016 at the age of 102.

As I drink yet another glass of local wine on my final night, watching the sun set over Duino Castle in Portopiccolo, it is these stories that stay with me. There are so many fads and buzzwords that oat about the culinary and wine worlds, but the enthusiasm for quality produce in this part of the world is genuine and, as a result, infectious. As another Mediterranean season draws to a close, I’m invigorated by the knowledge that there are still authentic destinations to be discovered, for those who are prepared to make the voyage.

Rooms at Falisia, a Luxury Collection Resort & Spa, start from €250 per night, portopiccolosistiana.it

Insider’s guide: 4 hidden gems in the Adriatic to discover by superyacht

The best yachts for charter in the East Mediterranean

Exceptional cases: the best wine cellars to visit by superyacht