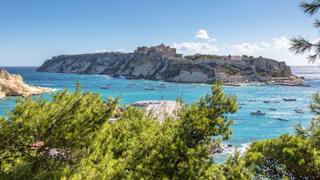 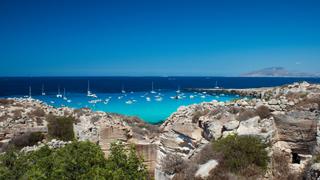 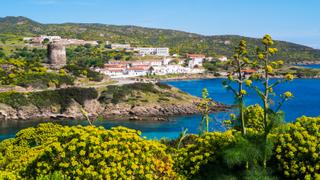 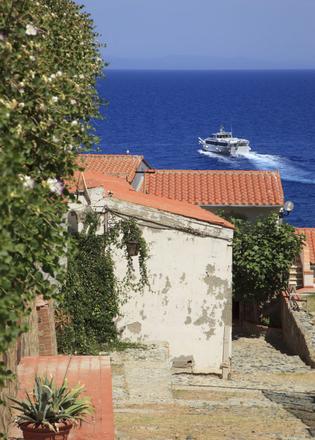 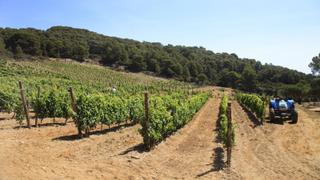 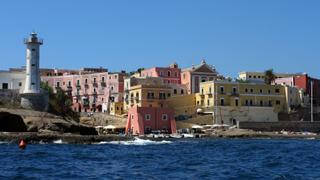 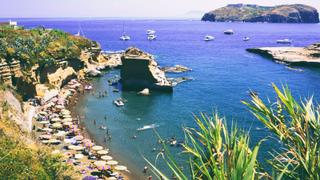 Under lock and key: Italian prison islands that offer the perfect escape

Location: West of Sicily, a day’s sail from Tunisia

A volcanic blast gifted Favignana its eclectic history: its 20 square kilometres are covered with tuff stone, made from the ash of an eruption, that can be cut like building blocks. The savvy Romans quarried entire swimming pools for themselves, complete with changing rooms and seawater pumps. Their ladies-only bathing area, Bagno delle Donne, survives on the isle’s eastern tip. Tuff stone also formed the foundations of the Saracen fort of Santa Caterina on Favignana’s volcanic peak, which can still be spotted as soon as you arrive in port.

But not everyone has settled here by choice. Arab, Norman, then Aragonese rulers declared the island’s precipitous interior the perfect spot for a high security prison. Whether the convicts deserved the azure blue views east to Marsala, or west to even more isolated Marettimo, is another matter.

The island still has one remaining penitentiary, which hit the headlines in 2017 when three prisoners cut through the prison bars then lowered themselves free using knotted bed sheets. The trio tried to steal a boat but were tracked down by their wet footprints and incarcerated again the same day.

But the island’s charms mean that it draws more willing visitors than escapees. “To Italians, Favignana is known as ‘the big butterfly’,” says Y.CO yacht manager Valeria Sangalli. “The dramatic coastline around its two ‘wings’ makes it a great yachting destination.” There are a number of irresistible grottos around its 32 kilometres of shoreline, including Grotta dei Sospiri (the cave of sighs), which moans in the breeze as you paddle inside. There is also sea life aplenty and the yearly bluefin run funnels from Tunisia up through the surrounding Aegadian Islands.

In 1874 the Florio family purchased the island and its lucrative fishing rights and the resulting boom called for more tuff rock buildings. One quarry to the east of the island, which was dug from the eighth century to the 1960s, has been replanted with island flora. These caves now form the Giardino dell’Impossibile, a rainbow display of oleanders and pomegranates that dazzle against the soft white rock.

Best by boat: Superyachts won’t fit in the Marina Favignana, which can accommodate boats only up to 16m, but there are numerous anchorages particularly to the north east and south west of the island.

The three bitesize Tremiti Islands sit quietly in the Adriatic and are home to more wreck dives than any other Italian archipelago. The Tremiti dives include an Ottoman galley, one of Garibaldi’s transport ships and a sunken statue of Italian saint Padre Pio in 10 metres of crystalline sea. The entire archipelago was declared a marine reserve nearly 30 years ago and fishing is banned. As a result, its topaz waters are stocked with seahorses, snapper, octopus, lobster, cuttlefish and grouper.

In the 1930s, Benito Mussolini utilised the islands as a penal colony. “The fascist regime exiled those it thought to be gay, lesbian or transgender rights activists,” explains Camper & Nicholsons’ sales broker Marco Fodale. “In 1938 men believed to be homosexuals were consigned to the main island of San Domino.” However, Mussolini unwittingly created the only place in Italy where it was permissible to be openly gay. Labour on the island that measures less than a square mile was tough. But the local cucina tremitesi cuisine, which has revolved around lobster, lemons, olives, figs and snails since the Bronze Age, eased their existence.

As well as the abundant marine life, San Domino’s jagged coast is scattered with picturesque grottos, such as Grotta delle Rondinelle and Grotta del Bue Marino. Visitors should also head to the fortified Abbey of Santa Maria on San Nicola. Founded by the Benedictines in 1045, it still has its elaborate mosaic floor and cloisters.

Best by boat: Fodale warns that San Domino’s 10km coastline has no moorings, only bucolic anchorages. As such he recommends a yacht with zero-speed stabilisers and dive platforms to get the most out of visiting the islands.

Location: A once lost world just off northern Sardinia

Asinara is cloaked in virgin Mediterranean flora, and the surrounding seabed is so kaleidoscopic it’s like an aquarium. The entire scene – located off the north-western tip of Sardinia – is a UNESCO-protected national park. Until 1997 it was the preserve of Italy’s most dangerous criminals, which included members of the left-wing terrorist group Brigate Rosse (Red Brigades), figures from the anonima sarda (Sardinian bandits) and Sicilian mafia boss Totò Riina.

The island now has a threadbare population and its most famous inhabitants are its little albino donkeys. Asinara National Park director Pietro Paolo Congiatu says the biggest attraction is “the great biodiversity in the land and sea”. Wind and waves have carved the coastline into an Italian Cornwall, with rounded rocks, sea kale and flowering gorse. Grab a paddleboard and spot peregrine falcons and striped dolphins.

Congiatu recommends an island tour. “You can ride to the crumbling prison on an electric buggy, and see the turtle centre, wild horses and horned mouflon sheep,” he adds. To preserve nature, visitors may swim from just three of the island’s countless beaches. But that’s three more than during the two centuries when inmates kept Asinara off-limits to visitors.

Best by boat: The island is still a strictly policed national park, so private yachts must moor in Marina di Stintino on the northern tip of Sardinia. Guests can then take a park shuttle boat in to Fornelli from where electric bikes can be hired for an island tour. Snorkellers, paddleboarders and kayakers are all welcomed within the protected marine area.

Location: A paradise prison straight out from Livorno

The Tuscan Archipelago, midway between Forte dei Marmi and Porto Cervo, is a yachting haven – apart from the chain’s tiniest island, Gorgona, which appears like Alcatraz Island complete with Pisan watchtowers and crenellated prison walls. However, the island regime is an enlightened one. When Italy was reunified in 1861 the kingdom created an experimental agricultural penal colony, where it was hoped that pine scents and azure seas would soothe inmates into submission.

Italy’s toughest prisoners (the 79 inmates still stationed here include drug traffickers and armed robbers) learn organic farming techniques plus the value of hard work with the help of one of Italy’s leading wine producers, Marchesi de Frescobaldi. “In 2012 we received an email from the prison,” says spokesperson Luisa Calvo. “They asked if we could help them manage a one-hectare vineyard.” The 30th-generation president of the group, Marquis Lamberto Frescobaldi, sailed 90 minutes from Livorno and discovered an island, only two square kilometres, carpeted 90 per cent by forest and the remainder splashed with Vermentino and Ansonica vines. The latter is a tough Sicilian variety that has acclimatised to Gorgona’s searing summers, which start 20 days earlier than on the mainland. “Marquis Frescobaldi knew he could help prisoners to learn a new role to assist them on release,” adds Calvo.

The rate of reoffending is just 20 per cent, compared with 80 per cent in Italy’s overcrowded mainland prisons. In return, Marchesi de Frescobaldi produces 3,700 bottles of rich, flinty white, with a red already in production.

Since 2016 guided daily hikes, ranging from three to eight kilometres, have been available on the island. The tours follow strict routes and no phones or cameras are allowed, but it’s worth it to experience the island’s flora, which includes evergreen and prehistoric forests, and pristine beaches. Bird lovers will relish the opportunity to spot the rare Corsican finch, which can be found on only four other islands besides Gorgona. Divers, however, will kick their fins in despair as it’s not possible to snorkel or dive in its clear waters.

Best by boat: As just 47 staff manage the penitentiary, prison breaks are a genuine concern. To gain access to the waters your captain must seek written permission from the Italian Ministry of Justice in advance. Pure pleasure-seekers may sail further south to the neighbouring island of Capraia. A penal colony itself from 1873 and 1986, it’s now a national park with wild mouflon sheep and dolphins aplenty.

Lying midway between Ischia and Ponza this elongated island, which is the remains of an ancient volcano, was discovered by the Romans. It became a popular dumping ground for Roman miscreants: Emperor Augustus banished his daughter Julia there on charges of adultery; later Emperor Tiberius banished Augustus’s granddaughter Agrippina the Elder after she was declared a public enemy of the state; and the ever-charming Emperor Nero also ditched his first wife Octavia on the island so he could marry Poppaea.

At 1.5 square kilometres, it’s the second largest isle in the Pontine archipelago and has a more relaxed vibe than its neighbour Ponza. It is virtually car free with colourful villas and a smattering of tourist hotels. “Ventotene remained uninhabited for ages,” explains Tonino Cacace, the entrepreneur behind the Capri Palace Hotel. “Even many Italians don’t know about it.”

The island’s slow development could be because there is no natural standing water or because Ventotene reprised its role as a prison for subversives in the 20th century, before the jail on Santo Stefano was closed in 1965.

Nowadays the island has earned a reputation from captains in the know thanks to its superb diving spots, packed with barracudas and gigantic groupers. In 2009 archaeologists found five preserved galleys on the seabed with intact cargos of wine, olive oil and garum (an ancient Roman fish sauce).

The main square of Piazza Castello has an unhurried rhythm that revolves around sipping macchiato coffees and reading La Repubblica. The only effort expended is to make one’s own wine or catch a pile of fish.

Best by boat: Smaller vessels can sneak into Ventotene’s Roman harbour, Porto Romano. Superyachts will find shelter off Punta Pascone on the island’s western side.

First published in the July 2018 edition of Boat International.