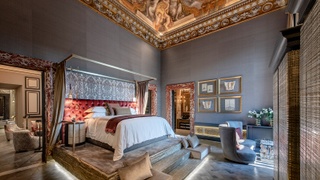 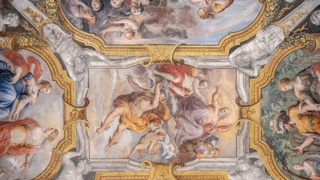 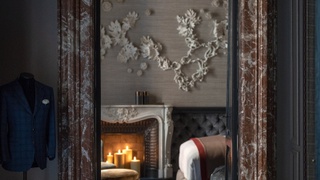 Refitting Rome: How a superyacht designer renovated a Pope's apartment

When renovating a property built for a pope, designed by one of history’s greatest architects and daubed with Renaissance frescoes, your challenges are rather more sophisticated than fabric swatches and door fittings. Holy Deer San Lorenzo City Lodge, on Rome’s grand Piazza Navona, was designed by Francesco Borromini for Pope Innocent X in the 17th century. His mistress, Olimpia Maidalchini Pamphilj, had it built on the side of Sant’Agnese in Agone church to move him away from the Vatican and keep him within her sphere of influence.

Giorgia and Stefano Barbini, formerly senior figures in international fashion, added this generous slice of history to their ultra-exclusive portfolio of rental properties, San Lorenzo Lodges (there’s also White Deer mountain lodge in the Dolomites and Blue Deer, a Sunreef 74 catamaran). Vacant for some time, the apartment was in decent shape – but with such a weight of history, the challenge was making Holy Deer feel like a comfortable retreat, rather than a museum. The renovation’s designer Francesca Muzio, of FM Architettura d’Interni, has plenty of experience with palatial spaces in the superyacht realm: “It is exactly the same approach,” she says. “Whatever you design is for the humans that will live there. It is not to represent yourself, or the Renaissance in this case.”

The perfectly preserved frescoes presented a rarefied challenge – how do you design around Renaissance masterpieces? “The idea was to bring the colours down into the room,” says Muzio. This meant silks, velvets and linens in deep blood orange and vivid teal, against walls in powdery blue-grey and soft brown. To replace the modern monochrome floor tiles, meanwhile, the team wanted a homely material. “Of course, Rome means marble,” says Muzio. But marble is hardly warm. “We thought about a wooden floor, but a wooden floor is Paris, it’s Versailles.”

In Rome’s Renaissance palaces they saw terracotta tiles, but the colour did not complement the frescoes. Then they found an area near Rome where the Etruscans had produced black terracotta and, more than 2,000 years later, one family business still made it. “When you use black as background all the colours are brighter,” says Muzio. “Everybody who saw the apartment before and after thought that we had restored the frescoes.”

The style of the new apartment is grand enough to fit its palatial nature, yet sparing enough not to vie for attention with the Renaissance flourishes. The bed in the Pope’s bedroom is a modern four-poster with no top, so that you can fall asleep gazing at the frescoes. With a ceiling height equivalent to three storeys, there’s a danger this could feel like sleeping in a ballroom – so Muzio placed the bed on a dais. The decor throughout is either antique or made by Italian artisans. In the kitchen, a glittering Murano chandelier hangs above an 18th-century Roman Baroque table inlaid with 34 marbles. There’s also a gleaming 1918 meat slicer, to which the cook Camilla lugs several fine Italian hams each morning (there’s also an excellent host, Gustavo). The spa pool in the master bathroom is decorated with a 265,000-piece mosaic.

The dressing room to the Via dell’Anima bedroom is a homage to Giorgia Barbini’s grandfather, Gaetano Savini, founder of fashion label Brioni. “We covered the cupboards with cashmere Prince of Wales [tweed], like a jacket,” says Stefano. “Inside, the lining is silk.” Six of Savini’s original sketches from the 1970s also hang on the wall – some of the many family treasures sprinkled throughout, like a first edition of The Adventures of Pinocchio from 1883, or a tiny 1782 atlas.

There are new touches in the mirrored bar stocked with Italian tipples, and the self-playing Yamaha grand piano in the music room, which can be controlled by iPad or synced with another piano so that a real pianist can play it remotely. Watching the ivories tinkle to ghostly digital fingers, and hearing the echo through the chambers, the spirits of past and future seem to play in perfect harmony.