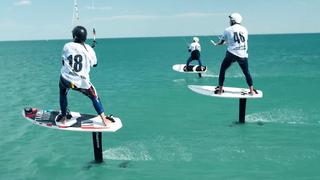 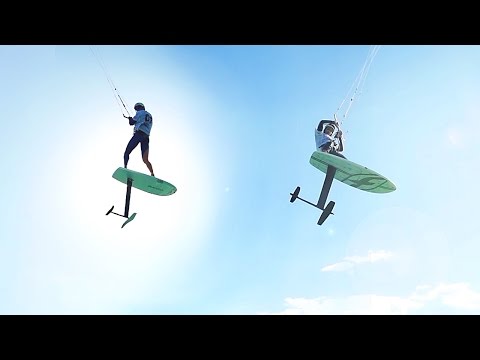 Inspired by the impressive hydrofoils at the 35th America’s Cup but not quite willing to fork out for your own AC45? Well thanks to an array of foiling water sports you can now experience the thrill of hydrofoiling without so much expense.

While you may have already tried your hand at foil windsurfing, we’re willing to bet kitefoiling may be new to you. Based on kite surfing, kitefoil is the closest you’ll get to hoverboarding without actually investing in superyacht toy of the future the hoverboard.

The premise is simple: riders take to the waves on a small, simple board fitted with a carbon fibre hydrofoil fin and a large kite. With enough wind power and speed the entire board lifts out of the water and the reduced drag means riders can achieve speeds faster than many sailing yachts. Plus, unlike the notoriously difficult kitesurfing, kitefoiling is in fact relatively easy to learn and requires only strength, balance and a bit of nerve.

So why haven’t you heard of it? Although growing in popularity over the last few years, kitefoiling has been largely overshadowed by its wind and kitesurfing cousins. However, thanks to viral videos like the highlights reel from the recent Kitefoil Silver Cup in Montpellier (above), the sport is now gaining momentum and it’s easy to see why. Aside from the thrill of flying through the air at great speeds, as the film demonstrates, there are plenty of tricks to be mastered - and wipeouts to be avoided - when it comes to kitefoil.

Interested? There are now plenty of water sports schools offering courses in kitefoil that can be incorporated in to a luxury yacht cruise of the Mediterranean. However, if you’re happier being a spectator be sure to look out for clips from the third round of the Kitefoil Gold Cup which takes place in San Francisco, USA this weekend (July 30 - August 2).