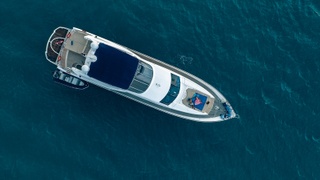 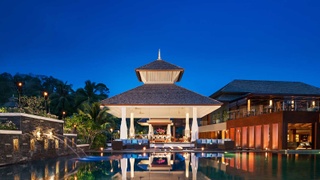 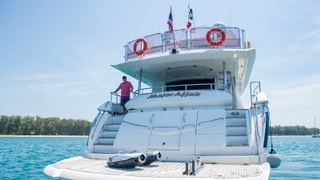 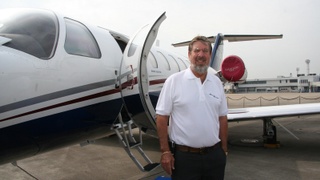 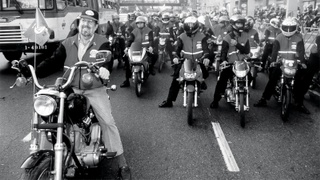 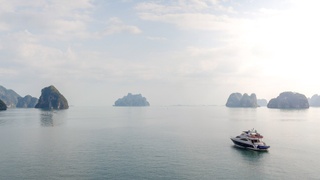 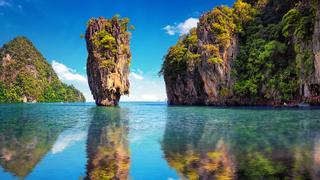 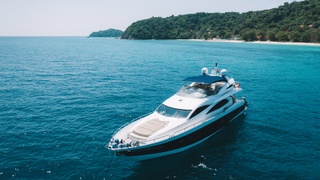 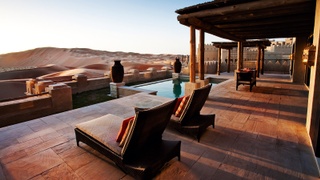 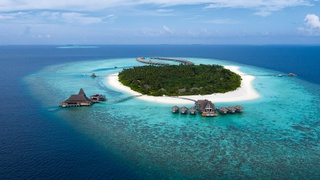 On board with William Heinecke, owner of 28m motor yacht Major Affair

The American-born CEO of the Anantara resorts chain tells Sophia Wilson how he built his empire, made Thailand his home, recovered from the 2004 tsunami... and how he loves his 28m Sunseeker

The two most important pieces of advice that William Heinecke would give aspiring entrepreneurs is to “be passionate about what you do” and “play hard”. “If you are going to be working damn hard you had better enjoy it,” says the CEO and chairman of Minor International, which has a portfolio of more than 550 hotels, including Anantara resorts, and 2,000 restaurants. “Spend time on yachts and private jets and enjoy what you have. That’s the only way you can get balance in your life.” Sitting on the sundeck of Heinecke’s 28-metre Sunseeker Major Affair, at the secluded far end of Phuket’s Bang Tao Beach with Anantara’s Layan Residences cascading down the tropical hillside behind us, it seems he has heeded his own advice.

Although he retains a soft American accent, Heinecke has lived in Asia for 65 years and in Thailand for most of them, after his parents relocated when he was a child. Now 70, his passion for yachting started more than 40 years ago and he has spent much of the past four decades chartering yachts all over the world (including diving with great whites in Australia and cruising Papua New Guinea) and owning a fleet of smaller yachts and superyachts. He bought the Sunseeker we are on board five years ago and also has an 18m version in Ko Samui. Based in Bangkok, Heinecke tries to spend at least two weekends a month at his Anantara Layan resort, where he splits his time between his eight- bedroom residence – one of 15 properties designed by the late Jaya Ibrahim that sit above the main resort – and Major Affair.

“Family is the first priority, and the second is to de-stress,” he says. “The villa is always great but being able to get on the boat is the magic part.” He has four grandchildren, two living in Thailand and two frequent visitors from Portland, US, so the yacht’s water toys are in constant demand. “They are very much into the donut, which allows three or four of them to hang on and see how long they can survive without being turfed into the ocean. The Seabobs are also great and we just got another one called a Seajet, which is a bit more powerful and lighter.”

It soon becomes clear while chatting that behind Heinecke’s friendly grandfather exterior – it’s a Saturday so he is dressed in shorts, T-shirt and cap – lies a James Bond-esque daredevil. It’s fitting considering we are just a few kilometres from the limestone karsts that were used as a filming location for The Man With the Golden Gun.

Not only does he own the original golden gun but he also has a Bond-like passion for vintage performance cars and jets. He started flying 40 years ago and is the founder of private jet charter service MJets. “I still have my flying licence but I must admit I don’t spend much time in the cockpit any more,” he says. “I flew for a long time, before I could afford to have a crew, but now I much prefer to be in the back seat.”

When on land his passion for go-karting as a young man has now been upgraded to sports cars – although this is perhaps the one area where Phuket falls short for Heinecke. “I wouldn’t choose Thailand as a driving destination but I do keep an old Ferrari, an E-Type Jaguar and a couple of motorcycles in Phuket. They are great fun to go to the marina or the beach club,” he says. The rest of his collection is split between Oxford in England and Monterey in California. “I haven’t counted recently but I probably have about 40 or 45 cars and 10 or 15 motorcycles. The biggest part of the collection is the Ferraris and many of them are one-offs or prototypes. They are all from the 1950s, 60s and 70s, which is my favourite era,” he explains. Heinecke regularly ships cars from his beloved collection to Italy, Austria or France to find roads worthy of their pristine wheels.

Heinecke literally lives a jet-set lifestyle, impressive considering he started his first company 50 years ago with just a borrowed $1,200 (£920). “I think today the company has a market capitalisation of about $6 billion, so we have had a good run,” he says with a humble nonchalance. He became a Thai citizen in the early 1990s – renouncing his American citizenship in the process – and is an advocate of the country’s business credentials. “It’s a country that has never been colonised,” he explains. “America thinks of itself as being a big commercial nation but they have been doing business for 250 years; Thailand has been trading for 2,000 years.”

Despite him joking that his half-century of hard graft in the hospitality industry equates to an “overnight success” there have been many challenges along the way. He has survived multiple political coups, plunging markets and the devastation of the 2004 tsunami.

He was in Bangkok when the waves hit Thailand’s west coast early on Boxing Day morning, claiming 5,300 lives in Thailand and destroying Anantara’s Khao Lak hotel. “The Prime Minister was the first man to land back at the airport when it reopened in the evening and we were the second because we came on one of my planes,” he sombrely recalls. “We lost staff and guests at our hotel. It was completely wiped out.” Visitor numbers plummeted in the aftermath but Heinecke credits Thailand’s unique culture for its rapid recovery. “The people were just so incredible, they cleaned up here immediately,” he adds.

Thailand is now booming again, with a record 38.27 million tourists visiting in 2018, but Heinecke wants the country to concentrate on quality rather than quantity. “Someone that comes in on a private jet or a private yacht will spend more money than a whole plane load of low-cost tourists and it is a lot less damaging to the environment,” he argues. To help encourage this type of tourism he has been a strong lobbyist for government to modernise its laws to make it easier for foreign-flagged superyachts to charter in Thailand (currently charter yachts have to pay a seven per cent import tax of the value of the yacht). “I think Phuket could become the epicentre of yachting in this part of the world: remember, half the world’s population is within six hours of here.”

His Phuket hotel is perfectly situated to be a jumping-off point for these visiting superyachts – and for Heinecke himself. “I prefer boating in Asia more than I do in Europe because the islands are so beautiful and there is so little traffic,” he says. “All three generations of my family love to dive and the Surin Islands, the last islands in Thailand before Burma, have some of the best diving at a place called Richelieu Rock.”

With four en suite cabins on board as well as a compressor, Major Affair is also deliberately set up for longer trips with the family. “The furthest we have gone on this boat is the Andaman Islands, which is about 36 hours by boat from here. It’s an hour by jet to Port Blair so we tend to send the boat there, fly to Port Blair and then cruise for the week,” he explains. Time on board with his family is precious and Heinecke believes this is a feeling shared among elite travellers. “The ultra-high-net-worth today doesn’t really want to book a hotel room, or several hotel rooms, and then meet in the coffee shop for breakfast or by the pool for lunch. They want the privacy and the connectivity of being together as a family,” he explains.

This change is reflected in his latest projects, including the Layan Residences, and the next stage of development for the Phuket resort which will see another 16 private villas built along the hillside. “The residences are literally a small private hotel. They say money can’t buy you everything but it can often buy you quality time with your family and loved ones,” he adds.

Heinecke’s business plans are ambitious – seven new Anantaras are planned globally and he tripled the size of his hotel portfolio by acquiring Spain’s NH Hotels last year – but he also has a green focus. “You have got to think of the planet as your ultimate stakeholder, so you have got to look after it,” he says. “The larger the group the more important the sustainability is. The bigger players have no choice but to recognise that our future relies on maintaining this sort of beauty.”

As part of his sustainability programme, Heinecke also encourages each hotel to choose causes that fit with its location – from the Mai Khao Marine Turtle Foundation and the Golden Triangle Asian Elephant Foundation in Phuket to a coral adoption programme in the Maldives. “It’s about trying to make sure that you have projects that are sustainable and that people are passionate about to carry on. It’s an important part of our whole corporate culture,” he adds.

Having accomplished so much you wouldn’t imagine there are many items left on Heinecke’s bucket list... but there is one thing. “We have tried to create something with all our hotels, but I haven’t created a boat yet. I am looking at it,” he smiles. Of course, it is family first so he has sights set on a minimum of five cabins with plenty of deck space. “It would have to be something that could cruise comfortably to the Maldives or Indonesia,” he adds. “Those are the areas that I am keen to spend more time in as I get older.”

Living by his own “work hard, play hard” philosophy the enigmatic entrepreneur doesn’t seem to be showing any signs of taking his foot o the pedal for gentle cruises just yet. “This is not a job, this is really a hobby for me and I love it,” he concludes. “I don’t get bored of it, I don’t get tired of it and I’m not looking to retire. I am looking to enjoy life even more.”

Having spent time with Heinecke and witnessing first-hand the passion that he instils in the staff who work for him I don’t doubt this, although he is going to need to free up some time to build that dream superyacht.