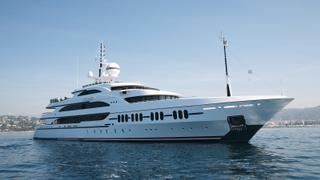 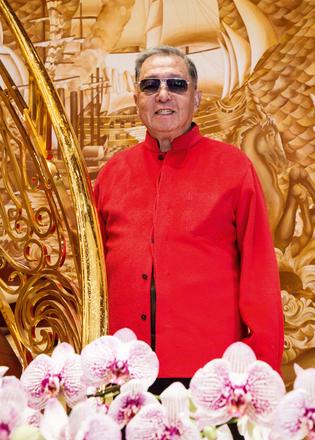 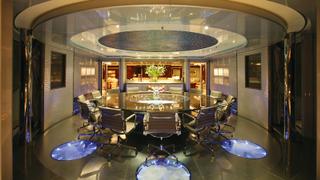 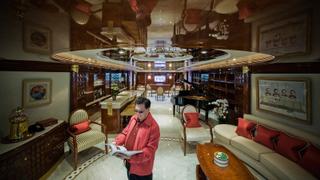 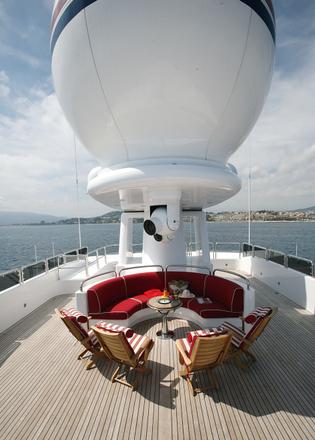 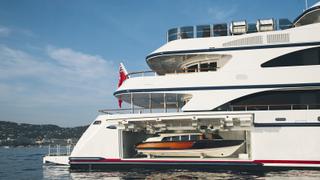 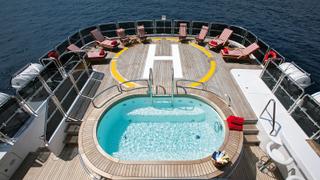 On board with Ambrous Young, owner of 65m Benetti Ambrosia

The Hong Kong businessman and elder statesman of superyacht ownership Ambrous Young has given his third Benetti a high-spec refit. He gives Suzy Rayment an excited rundown of its technological touch-ups...

Ambrous Young is what you would call a brand loyalist. His current boat is the 65 metre Benetti Ambrosia III – the fourth superyacht he’s bought from the Azimut-Benetti group. The first was a 30 metre Azimut Jumbo, which he purchased straight out of a catalogue sight unseen. But as soon as it was delivered to him in Hong Kong in 1990, he knew immediately that it wasn’t going to be big enough. So what did he do? He got on a plane to Italy.

There he met the owner of Azimut-Benetti, Paolo Vitelli, striking up a relationship that continues to this day. “All my superyachts have been built by Azimut-Benetti,” Young explains. He loves the yard so much that that he bought a piece of it, immediately investing heavily in new facilities and product design. “The classic 35 metre mini-Benettis – they were my idea,” he remembers proudly, referring to the range of smaller composite yachts that helped Benetti expand rapidly in the 1990s.

Young is now very much an elder statesman of superyacht ownership, having sold his stake in Azimut-Benetti in 1999, and he is quick to talk about Ambrosia III’s recent refit and her 10 year Lloyd’s survey, which has just been completed by the Jade shipyard in Kaohsiung, Taiwan. Built in 2006, Ambrosia III was considered to be a breakthrough at the time. She was the most technologically advanced superyacht to be launched up to that point by Azimut-Benetti, and the second biggest after 1980’s 85.6 metre Nabila (now Kingdom 5KR), built for Adnan Khashoggi.

“My first Ambrosia was a 45 metre (now called Il Sole), and she was quickly followed by a 55 metre (now called Starfire), launched in 1997. Ambrosia III took me a little longer to build – around five years – as I wanted to embrace the groundbreaking technologies that were coming online at the time. In the early days I was not content to just invest and design, I was more active in supervising the build. When we were building the first two Ambrosias I could often be found in the engine room, but not these days!”

Like many things that Young is involved with, it is the technology and the details that grab his attention and we spend considerable time poring over manuals that document every stage of the refit, as we sit at the yacht’s elegant dining table complete with monogrammed Baccarat crystal, Christofle silverware and JL Coquet tableware. On the side tables are silver-framed photographs of Chinese, Russian and American presidents smiling alongside my host – a reminder of Young’s connections.

Despite his serial superyacht ownership, he has always been most drawn to the skies. “I was a young naval officer,” he says, “but my real passion is aviation. The first time I saw a jet aircraft was when I was serving in the navy. It flew overhead, and I knew from that moment that my future was in aviation.” Getting his first break in the industry took some graft. After repeated rejections, he was left with just enough money to send one more speculative telegram advertising his services.

In the 1970s, telegrams were charged by the word, so Young spent several days composing a brief but comprehensive letter to the British Aircraft Corporation (BAC) and sent it off – in hope as much as in expectation. A number of weeks later he was stunned to receive an envelope containing a first class return ticket to London, where he secured a job representing the company in Asia – but not before undertaking an intensive induction that saw him learn all areas of an aircraft’s operation, including how to empty the inflight toilets, which involved the use of a rather rickety ladder, Young laughs.

He was hugely successful, and once sold an entire fleet of second hand Viscount passenger aircraft to regional carriers in Asia. His connection to the world of aviation is still strong, and in 2005 his Hong Kong-based company, Young Brothers Aviation, purchased Flight Training Adelaide, a college providing world-class customised aviation training solutions for both the fixed wing and rotary sectors of the industry.

While building his aviation business, Young was also building boats. The present Ambrosia was always intended to be a transoceanic vessel. A modern profile – reflecting her high-tech specs – gives the six deck 65 metre vessel a powerful presence on the water, and a look that’s aged extremely well.

Her state-of-the-art diesel-electric azipod installation was ahead of its time; it’s a system that only requires one of the four main generators to be operating for the yacht to reach her cruising speed. During the voyage from Italy to Hong Kong the diesel engines clocked up just 850 hours, compared with the 2,550 hours or more that might be expected of a conventional set-up. Also on board is a top-of-the-line surveillance and deterrence system, to make navigating in some of the world’s wilder waters a little less nerve-racking.

The interiors by François Zuretti are very traditional, and expand on the art deco theme used on Ambrosia II. But innovation is never very far away and the “Stargate Room” on the upper deck is a tour de force. The circular room has a unique lunar theme, and functions both as an informal dining room and a cocktail lounge. The ceiling features the constellations of the night skies in both the northern and southern hemispheres, projected by hundreds of fibre optic strands. The whole panel is driven by electric motors linked to the yacht’s GPS, and revolves in relation to where Ambrosia III happens to be on the world’s oceans. The round dining table, meanwhile, features a glass top, inside of which is a bas-relief of the moon’s surface made out of glass by Astolfo Turelli. The lunar features continue in the flooring, based on satellite photographs of the moon’s surface – even including tyre tracks from the lunar module.

The Ambrosias have taken Young all over the world, including twice across the Pacific. “One trip to Alaska was very memorable. We caught a strange fish, and nobody knew what it was, even now. We still ate it for dinner, and the following morning when we woke up everyone looked and felt a great deal younger!” On the longer passages, Young likes to spend time on the bridge with his captain. “On one occasion the captain gave us all a terrible fright – we were en route from Hong Kong to Shanghai when a rope got wrapped around the propeller in the middle of the night. The ex-military American captain just put a knife between his teeth and dived over the side to cut the prop free.”

When his yacht was first launched, Young spent a lot of time in the Mediterranean, but these days most of his sailing is in Asia, cruising regularly between Hong Kong and Kaohsiung.

I was lucky enough to once join a cruise that made Ambrosia III the first superyacht to visit Taiwan, which was previously off limits due to its proximity to mainland China. We cruised to Kaohsiung and then to the Penghu archipelago on the west coast of the island. As relations between China and Taiwan have thawed, the archipelago of 90 islands and islets in the Taiwan Strait has become a popular recreational destination for sailing, windsurfing and diving.

“I believe there are a number of good things that make Kaohsiung a great superyacht destination,” says Young. “The local authority is working very hard to attract visiting superyachts, first with the development of the Love River Marina Kaohsiung complex and beautification of the surrounding area, and secondly with a substantial reduction in bureaucracy and administration where visiting yachts are concerned. There are no restrictions for crew visas, regardless of nationality, nor local taxes – even for yachts staying longer than six months.”

These all contributed to Young’s decision to refit his yacht in the city, bringing the boat up to 2017 standards. Control and monitoring systems were upgraded, new audiovisual equipment was installed and the azipods were overhauled. “The upgrade to the azipod power control was very interesting, as we usually operate using only one generator at optimum load for best economy and emissions,” Young says excitedly. “However, we are a relatively small ship, so the hydrodynamic forces vary depending on waves and wind. As such the power demand can fluctuate significantly even from second to second, while the variable speed propulsion drives try to keep the propellers spinning at a constant speed. However, being diesel electric we can set the throttles for a constant power output by varying propeller speed. This reduces generator load fluctuations and enables us to optimise performance.” Maybe he does spend a bit more time in the engine room than he lets on.

The refit had a dual purpose, since the yacht has been put on the market. “The yacht is for sale. Of course it is – all boats are!” Young jokes. With a boat this well specced you have to think it won’t be on the market for long. As for Young, I try to tease out plans for his next yacht, but he’s not biting. He owned that Azimut Jumbo just a few years before taking delivery of the first Ambrosia in 1994. Ambrosia II came in 1997, and Ambrosia III in 2006, making his current boat the one he’s owned longest. So who’s betting Benetti has some interesting designs tucked away for Ambrosia IV?

First published in the September 2017 edition of Boat International.

Q&A: On board with Rafael Nadal, tennis ace and owner of Beethoven