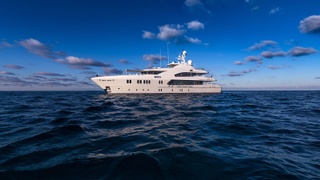 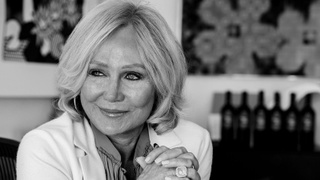 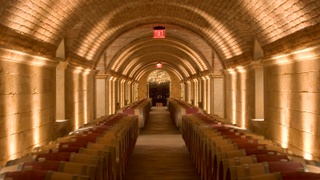 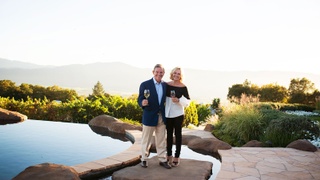 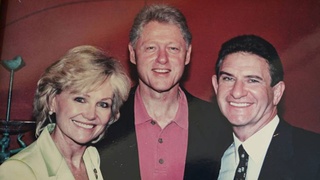 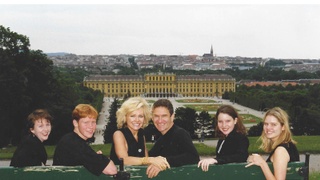 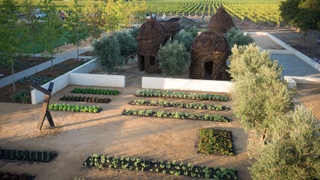 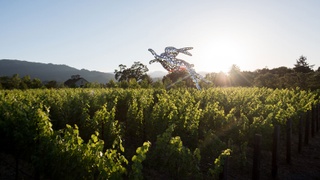 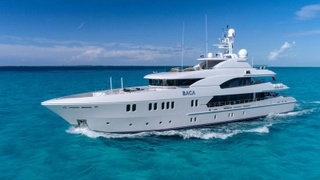 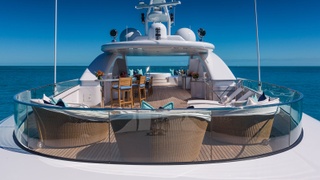 On board with Kathryn Hall, owner of 43.4m Baca

Whether it’s winemaking in Napa Valley, serving as US ambassador in Vienna or cruising on 43.4m Baca, this California girl has always prized the pursuit of joy and happiness, says Cecile Gauert

The sun was slipping behind the horizon on a February evening in Florida, but no one was in a hurry to leave the deck of a docked yacht named Baca, where excellent wine was being poured into tall glasses.

Barefoot and elegant in a yellow dress and long white scarf casually wrapped around her neck, Kathryn Hall moved between her guests, chatting with each of them with the ease of a diplomat and the generosity of a friend.

The former US ambassador to Austria, accompanied by her daughter, Jennifer Brown, who is the director of wine brand Baca, was unveiling a new Zinfandel from their Californian winery on board the family’s new yacht in Fort Lauderdale.

“As a kid, I used to like sailing in the San Francisco Bay. And as a California girl, I think water and the ocean is just part of who I am,” she says. The art and business of winemaking is also now very much part of who she is. In a little over two decades, this family business, which now includes Walt Wines, Hall Wines and Baca, has become one of the most respected wine producers in the US and beyond. Three of its wines are in the 100-point club – the perfect score awarded by American wine critic Robert Parker, who has made or crushed reputations with reviews in his Wine Advocate publication. He gave Hall Wines its first perfect score for its 2010 Exzellenz Cabernet Sauvignon. Kathryn and husband Craig Hall wrote about it in the autobiography they co-authored, entitled A Perfect Score: the Art, Soul and Business of a 21st-Century Winery.

Kathryn grew up around wine. Her parents bought a winery in Mendocino County in the 1970s, which she helped run after they died. However, when she graduated from the University of California, Berkeley, she had a different ambition. “I wanted to be a lawyer and I wanted to save the world,” she says. Winemaking “wasn’t my goal when I first started; I thought it was political change,” she says. She became a lawyer, a businesswoman and a community activist and eventually moved to Dallas. This hard-working and engaging mother of two, who had run for political office once before, decided to throw her hat into the mayoral race. She had friends in high places, including the late Dorothy Ann Richards, Texas’s 45th governor.

Richards ended up indirectly playing a role in the next chapter in Kathryn’s life by suggesting she meet Craig Hall. He had an office overlooking Dallas in a tower branded with his company name. That’s where they first met after Kathryn made an appointment to ask for his support in her campaign. Their initial meeting blossomed into something much bigger and they were married a little more than a year later.

Craig, who is a lifelong entrepreneur, had no appreciation for wine at that point. However, when they traveled together to Napa Valley, he realised it was a big part of her life and so it became part of his. In 1995, they bought the Sacrashe Vineyard in St. Helena, California. It would take a few more years for them to get their wine business into high gear thanks to one of those unexpected detours that keep life interesting.

Kathryn, who did not end up becoming the mayor of Dallas, had expressed interest in an ambassadorship. So when president Clinton’s assistant called to ask whether she’d like to be the US ambassador to Austria in 1997 she did not hesitate. “I loved knowing about other cultures. So, combining that with the fact that I practiced law for years, I felt it was a good fit,” she says. “I had gone to boarding school in Europe when I was a kid, so I’d always been interested in international affairs. International culture and international politics have always been of interest to me.”

She knew German, as well as French, and Austria appealed to her even though she’d never been there. “Austria was just intriguing to me because of its unique position politically in Europe; at some point it was the easternmost point of what we call the free world. Vienna was that most eastern point. It’s a country that’s culturally fascinating because it sits in multiple cultures east and west, and then, of course, the music and the art make it a pretty fascinating society to live in.”

The move to Austria had to be kept a secret, including from their high-school-age children, until they arrived in Vienna. “It was one of the hardest things of all,” she says. However, the family adapted very well and made new lifelong friendships.

When they returned to the US in 2001 after four years, the Halls brought a bit of Austria to Napa Valley. An Austrian wine cellar builder by the name of Fritz Gruber created the 14,000-square-foot wine cave and the tasting room at Hall Rutherford Winery. For the 2005 grand opening, the Vienna Boys’ Choir, which happened to be traveling in the US at the time, sang and the former chef of the US Embassy in Vienna prepared Austrian food.

The Halls were also working in earnest on Hall Wines St. Helena. They had purchased a run-down wine co-operative in Napa and were looking for a radical transformation. “One thing had been clear from the start: we wanted our winery to be more than just a production facility,” they wrote in Perfect Score. “We wanted it to reflect our passions for nature, art and architecture.”

For this special project, they tapped one of the greatest living architects, Frank Gehry. Then well into his 70s, Gehry came to Napa to see the lie of the land and surprised everyone by scaling a perilous set of stairs to the top of a fermentation tank. Relating the episode in their book, the Halls recall that eureka moment when the architect shared his vision for their visitor centre. “This is what you want,” he told them after climbing to the top and surveying the panorama. “You want to see the valley from up here.”

Nothing comes easy when working with visionaries, permits, certificates and neighbours, and in the end, they parted ways. “The building ended up not being the Gehry building, but it still has a lot of the remnants because the architect had worked with Frank’s local team,” she says. “Working with artists in general, and great architects are artists as well, is really a wonderful experience. You learn about how the space affects you and, for me, the more time I spend looking at architectural drawings and visiting buildings, the more I appreciate the nuances of great structures.”

The visitor centre and tasting room at Hall Wines St. Helena has the panoramic views Gehry had envisioned and received the gold LEED certification the couple were determined to achieve.

Nowadays, the Halls share their time between Napa Valley, Dallas, Paris and Hawaii but most of Kathryn’s time goes to the art and business of wine. “When you make wine, it’s not serious work like developing a peace plan in the Middle East, but what you are in the business of doing when you make wine is just making something that is going to bring people joy and pleasure. There’s a great amount of satisfaction from knowing that you create and then sell a product that brings happiness to people.”

The themes of joy and happiness come up often in our conversation. Of the name of the new wine and of the boat, she says: “Baca is a Latin word and it stands for ‘berry,’ but it’s also a derivative of a lot of great words that are to do with having lots of fun times and merriment, and enjoying wine, which is a big part of our life.”

Baca is the Halls’ second big boat. They previously had a 1998, 40.23 metre Amels named Monte Carlo, which they had to let go around the time the financial crisis melted investments and wine sales. “We were, like many people, hit hard by the recession in 2008, and boating did not fit our lifestyle at that point,” she says. “We’re just thrilled to be able to get back in. [Monte Carlo] had these two deck seats way up. We’d just sit up there, just the two of us, and just loved being out on the water with a totally unencumbered view.”

After a two-year search, the Halls bought a 43.4 metre yacht built at Royal Denship and set out to do a light refit. “I actually thought the boat was beautiful on the interior even when I first saw it. I think we were able to sort of brighten it up and make it a little more personal to us.” They added spots of colour throughout, including pieces of art, which they both love and collect. A piece by one of her favourite artists, Clare Woods, is on board. The yacht feels airy and comfortable and the bar on the top deck is perfect for wine tasting.

“The decor is very, very light and it’s full of punches of colour, which makes me feel happy, but I don’t think you want so much colour that it’s really intense. I think the real beauty of being out on the ocean is the ocean itself,” says Kathryn, who loves swimming in the open sea.

A few days after the wine party in Fort Lauderdale, the Hall family took a winter trip to the Bahamas and by mid-April Baca was on her way to the Mediterranean where they will enjoy a few trips. Charter is also part of the plan, not only to help with expenses but also to keep the crew happy and engaged. “I think it’s healthy for a crew to have charters that they are working on or looking forward to. Whether you are a crew on a boat or you are working in an office, being busy, I think, hones your skills and makes you better at what you do.”

And she hopes that, just as the wines they make encourage people to linger a little longer in the moment, so will Baca, the yacht, bring happiness and joy to others.

Exceptional cases: the best wine cellars to visit by superyacht

5 of the best wine regions to visit by luxury yacht