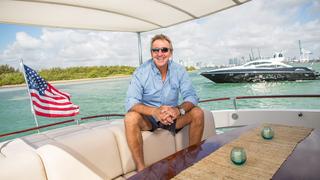 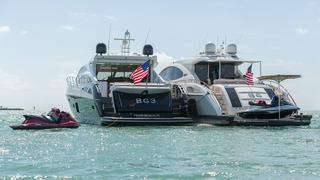 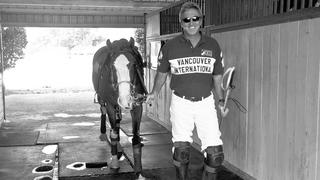 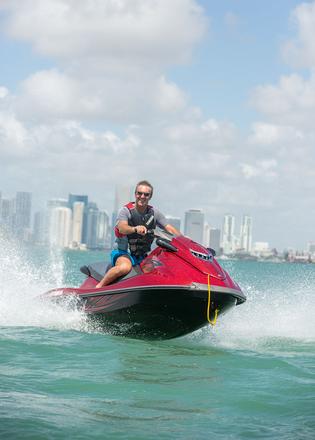 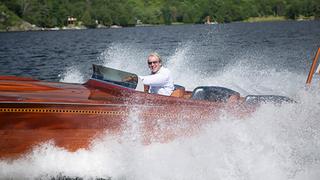 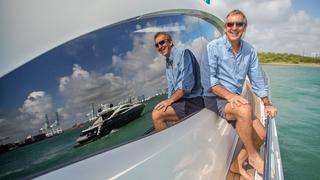 Canadian entrepreneur Bobby Genovese has plenty of outside interests, but once he started buying superyachts, discovers Marilyn Mower, he just couldn't stop.

“Who has more fun than us?” If you watch Bobby Genovese race his kids up the natural granite climbing wall at his summer house in Canada, or charge along on a polo pony, or blast out of the boathouse on Lake Rosseau in one of his vintage speedboats, you quickly understand the question is rhetorical. His face has two speeds: grin and bigger grin.

I first hear about Genovese in connection with a 47 metre Feadship he's refitting, Charade, thinking it might be a good story for Boat International's annual Refit book. Since Charade is in full “Frankenboat” stage at Derecktor shipyard, his PA suggests meeting on one of his other boats in Miami Beach or at his polo and equestrian club in Vero Beach, Florida. Serial boat owners, I've known aplenty; polo ponies added a new twist.

Genovese is a Canadian entrepreneur with an improbable success story that sounds like a TV script; oh wait, his life was bundled into a script: eight episodes of a programme called Bobby G: Adventure Capitalist that aired in 2008 and followed him and his CEO Marco Markin as they bought, built and sold companies.

Genovese is chairman of BG Capital Group and BG Capital Management Corp, both based in Barbados, BG Capital Investment Trust and now BG Signature Resorts. The Group has assets well north of €200 million and corporate business partnerships with assets above €10 billion. Tall, tan and fit-looking under a shock of sandy hair, his style is friendly, folksy, self-effacing and yet totally confident.

He has a knack for establishing working assets. We are sitting on one of them, a Lazzara 78 LSX sport yacht that chartered 170 days last year in Florida and The Bahamas. Our backdrop is another one of his yachts in the BG Signature Luxury Yacht Collection, a Sunseeker Predator 75 he’d added to the portfolio in December 2014. In four months it has already worked 50 days.

The story of how Genovese got to this successful point begins on a Canadian farm. “I only got to grade nine in school, but I was good on horses,” he remembers. “I baled hay all summer and taught riding and mucked out the stalls as the barn manager for a prominent stable in Toronto. In terms of lifestyle, I realised I was on the wrong side of the horse and I wanted to get off the farm.” It was Bobby’s late mother Lynne who realised her once-shy son had a knack for selling and convinced her older sons Rick and Blaine to give him a shot.

“Rick moved to Vancouver to work in the securities industry and I thought I would like to join him and be a stockbroker, but with only grade nine math, I couldn’t get a securities license,” admits Genovese. His brother gave him a car and a start at Euro Pacific Capital Group, in investor relations. By age 25, he’d started his own company, which grew to about 40 employees. Suddenly successful and with a talent for buying and selling companies, he moved to The Bahamas to open BG Capital Group. One day a friend invited him to a polo match in Wellington, Florida. “Guys are riding horses as fast as they can go and hitting a ball – it was like, ‘Wow, the land of the beautiful people.’ I thought to myself, ‘I can ride, let’s learn how to play polo.’”

For 12 years he played more or less full-time with his team, Vancouver International Polo, establishing himself as a solid three-goal player (polo players are rated on a handicap scale from -2 goals to 10, with 10 being the best handicap possible). In 1998, the team won the Canadian Open.

Since then he has acquired the Toronto Polo Club in Cookstown, Ontario, the place he was desperate to get away from as a child, along with teams in Argentina and Florida. Last January he purchased the former Atlantic Crossings equestrian facility in Vero Beach, and launched BG Polo & Equestrian’s fourth location. “John Walsh (host of America’s Most Wanted) has a team with us, too,” says Genovese. “It is our goal to invest in both youth and adult equine programmes.”

Genovese has applied that same gusto to yachting, which made him an instant serial boat owner. “I rediscovered waterskiing, a sport I loved, while working in Vancouver, so I bought a Malibu ski boat,” he says. “Then I thought I ought to have another one to use at my home in Florida. Then I bought a cottage on Lake Rosseau in Muskoka, Canada, so needed a boat there.

“In the 1920s, '30s and '40s Muskoka was an important wooden boat-building centre and there remains a strong tradition of fixing up the old boats and keeping them in boathouses for the summer. I started looking around for a classic and my brother said, 'The boat you want is Miss Canada III.' It was the first Canadian boat to win the Gold Cup (a prestigious US trophy awarded for powerboat speed records) and set a world speed record, and made celebrities out of her driver and mechanic, [respectively] Harold and Lorna Wilson (in the 1940s).

“I really liked the idea of buying a piece of Canadian maritime history. Then someone suggested I should buy this boat called, I kid you not, Pistoff by the famous Canadian designer/builder Vic Carpenter. I bought them both, but still didn't have a family boat, so I bought a restyled Chris-Craft. As fast as that, I'd gone from no boats to five,” says Genovese.

But he needed a bigger boat for Florida, too. “In 2007, Dick Lazzara introduced me to a boat he knew I liked, the LSX 75. But my kids were getting bigger and they wanted deck space. I agreed to buy if he could make the back end about three feet (one metre) longer.

“The next summer I'm in Canada and this old-timer says, 'Too bad you don't have Miss Canada IV, the first boat to break the 200mph barrier (in 1950).' I found her in the Ingersoll Museum (Dresden, New York) and I asked to buy it. The curator says, 'Bobby, we're not in the habit of selling our exhibits.' But I really thought it should be out on the water, not gathering dust. I appealed to the Wilsons to let me honour the racing legacy of their family. They convinced the museum it would be a good thing. Now I use it and have it on display at shows throughout North America.

“It took me two years to restore that boat, and I thought, 'Great, now I'm finished.' The phone rings and it's a guy who says, 'Hey Bobby, (vintage classic powerboat) Miss Miami is for sale,' and I think, 'Oh, hell, why not?'

“There was the time I went to see a boat my brother was restoring and I ended up buying Rambler, one of the most historic cruisers on the (Muskoka) lakes. I thought I got a great deal until I realised I also had to buy the entire island for its boathouse,” laughs Genovese. Thankfully, Rambler earns her keep doing cruises and weddings.

So why is he now re-doing a Dutch boat in Fort Lauderdale? It's all about working assets. Genovese has assembled a portfolio called BG Signature Resorts, a collection of 12 holiday retreats in the UK, The Bahamas, Canada, Argentina and the US. They range from a historic manor in the Cotswolds to a polo and equestrian retreat in Ocala and a ski chalet at Whistler - plus the boats.

“I'm a member of Albany Club in The Bahamas and outside was sitting Charade,” recalls Genovese. “ Her owner wanted to sell because he already had another yacht and was building a larger one. Charade only had 300 hours on its engines since the last update. I made him a no-hassle offer, which he accepted.

“My goal was to refit it to my taste,” he says. “We got rid of the dining room and added a VIP [cabin] on main deck. We put in hardwood floors, updated the lounge and put a [bath] in the master. I'm now in the millions [spent], but it's looking like The Hamptons inside. It will join the Lazzara and Sunseeker, which are the top two charter boats in Miami.”

But it's not all fun and games. BG Capital Group - privately held because Genovese doesn't like playing with other people's money - owns or operates more than two dozen companies. The strategy is to purchase no less than 50 per cent ownership of these companies in the $25 million (€23 million) value range with positive cash flow, revenues of $15 to $50 million and a solid management team. “I like to come in as an active partner and together we grow the businesses,” he says. Those businesses span a range of industries, from one of Canada's largest events companies, to multimedia and hospitality holdings, to timber operations.

“Hey, come up to Vero this weekend and watch us play polo,” he invites, as I leave. “We're playing against John Walsh's team. Who has more fun than us?” Indeed.