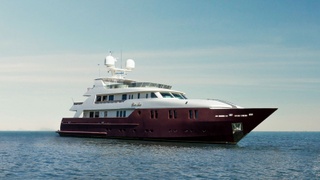 The 42 metre Concept Marine motor yacht Elisea Nova, listed for sale with Ocean Independence, has been sold in an in-house deal.

Built in cold moulded wood epoxy by Turkish yard Concept Marine, Elisea Nova was delivered in 2009 with a refit in 2013, with an overhaul of her Naiad stabilisers in December 2018. Concept Marine's in-house team were responsible for both the exterior and interior design.

Elisea Nova can accommodate up to 12 guests in six staterooms with a crew of eight. A full-beam owner's cabin is located forward on the main deck, a VIP cabin sits on the bridge deck, with a further three doubles and one twin on the lower deck. All staterooms have en suite bathrooms finished with gold mosaic tiles.

The yacht features traditional interiors in gold, cream and cherry wood. The main saloon has sofas to port and starboard with large windows out to sea, while forward is a formal dining room with a table that can seat eight and a chandelier overhead. Al fresco dining can be found on the aft deck through sliding doors.