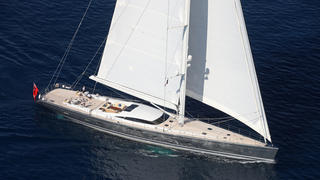 The 45 metre sailing yacht Heureka, listed for sale by Matt Albert at Yachting Partners International, has been sold with the buyer introduced by Ben Vaes at Luxury Marine in Spain.

Designed by Bill Dixon, she was built in aluminium by Dutch yard Holland Jachtbouw to Lloyd's class and delivered in 2014 as a high performance cruiser. A minimalist but comfortable interior by Rhoades Young accommodates up to eight guests.

She has a carbon fibre rig, along with carbon rigging and features a large and comfortable cockpit that is perfect for al fresco dining. A hydraulic Bimini top has been incorporated into the structure, which raises and lowers in a similar way to the roof of a hard top convertible car. Furthermore she has a telescopic keel, which can be raised to gain entry to some of the shallower, more picturesque harbours in the Mediterranean.

The saloon area has three settees to port with coffee tables between the settees and there is a dining area on the starboard side with a built-in sofa and extendable dining table. The entertainment centre incorporates a 42-inch flat screen LCD television and a stereo surround sound system.

Powered by a Volvo D16 engine, she came with a full set of water toys, including three tenders, two full sets of scuba diving gear and a dive compressor, 12 sets of snorkelling gear and a range of towables including water skis.