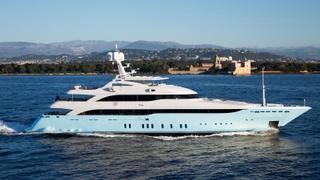 The 51.81 metre motor yacht Victory, listed for sale by Vassilis Fotilas at Fraser, has been sold in an in-house deal.

Built in steel and aluminium by Greek yard Golden Yachts to a design by Hydrotec, Victory was delivered in 2007 and has been constantly updated since. A popular charter yacht, she has a tasteful interior by Giorgio Vafiadis accommodating up to 16 guests in seven cabins, comprising a full beam master suite, VIP suite, two doubles and three twins. All guest cabins have satellite television screens, access to the central Kaleidescape on-demand audio and video server and en suite bathroom facilities while the crew quarters sleep 12 members of staff.

The main saloon comes with two oversized sofas and armchairs with plenty of natural light from the windows and an entertainment centre including a widescreen television set and a Kaleidescape audio/video server plus a stereo surround sound system.

Up in the skylounge is a further set of comfortable furniture, a bar and an entertainment centre. The sun deck is the ideal place for al fresco relaxation, with sun loungers grouped around a raised Jacuzzi spa tub, along with a dining area and chairs, two tables and a bar, sheltered by a retractable hard top.

Twin 1,050hp MTU diesel engines offer a cruising speed of 14 knots topping out at 17 knots and a range of 7,000 nautical miles. For added comfort at sea and in port, she is fitted with Naiad zero speed stabilisers.