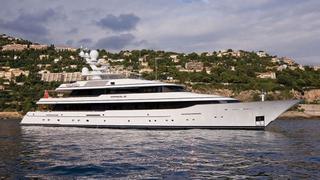 Chris Cecil-Wright at Cecil Wright & Partners gets in touch to say there's a major €6.95 million price drop on the 55.5m motor yacht Issana.

Built by Feadship in 2005, refitted in 2009, and formerly known as Drizzle, Issana features an interior in subtle, classic luxury by Redman Whiteley Dixon accommodating 10 guests in a master suite, three double staterooms and a twin cabin. Twin 1520hp Caterpillar engines give her a trans-oceanic range and she’s been fitted with zero speed stabilisers.

Lloyds classed and MCA compliant, Issana is down from €34.95 million to €28 million.