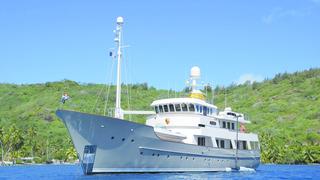 JFA motor yacht Zeepaard back on the market

Sold in August 2017, the 37.18 metre motor yacht Zeepaard is back on the market, listed for sale by Camper & Nicholsons International in Asia.

Built by France's JFA yard to RINA class and designed by Vripack, she was launched in 2003 as Axantha. In 2011, she completed a full refit including a paint job. A proven ocean-going vessel, her first owner undertook a three-year cruise around the world, traveling 50,000 nautical miles and visiting 39 countries. The circumnavigation was rewarded with a Neptune trophy as the joint winner of the Voyager's Award at the 2014 World Superyacht Awards.

In all, she has traveled over 72,000 nautical miles to 44 different countries. A special feature on this yacht for sale is a unique crow’s nest on the mast for spectacular guest views.

MCA compliant, her accommodation is for up to 10 guests in five cabins laid out as a full-beam master suite with a king sized bed and four double cabins with queen sized beds, all with en-suite bathroom facilities. In addition, the master suite has a private sauna, spa and a massage table.

She has been immaculately maintained inside and out by a professional crew of seven people. Twin 475hp Caterpillar engines give her a cruising speed of 13 knots and a transoceanic range of 7,000 nautical miles.