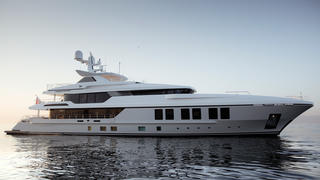 The recently launched 47 metre motor yacht Razan has been sold with Steen Christensen at Fraser in Palma introducing the buyer.

Razan started life in an Italian shipyard and arrived at Turquoise Yachts in Istanbul as a steel hull and semi-completed aluminium superstructure in 2014, and was launched in October 2016 with styling by H2 Yacht Design.

Razan distinguishes herself with extremely spacious outdoor areas, five guest cabins, all with Pullman berths, and a large superyacht beach club. With a draught of only 2.6 metres, she is able to explore widely — and nudge into bays not deep enough for bigger boats.

Central to Razan’s layout is a spiral staircase in ivory lightly veined Turkish marble from the shipyard’s own marble shop. The banisters are coated in softly grained creamy Italian leather from Foglizzo, while cleverly conceived lighting draws the eye upward. Off this shimmering central axis on the bridge deck, the upper saloon is designed for the particular requirements of younger guests.

She comes in just under the 500 gross tonne threshold, and features twin 1,950hp Caterpillar 3512B diesel engines, which give the yacht an estimated top speed of 16 knots and a maximum cruising range of 4,200 nautical miles at 12 knots.