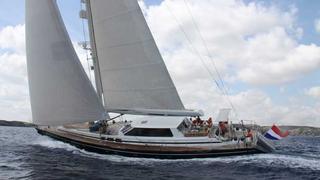 She was built by Dutch yard Jongert in aluminium to a Doug Petersen design, and is the fifth hull in the yard’s successful 2700M series. Lloyd’s classed, Ithaka has a modern interior in pear wood and accommodates six guests in three cabins including a master suite and two guest cabins. Under power, a 257hp Scania engine gives her a cruising speed of eight knots.