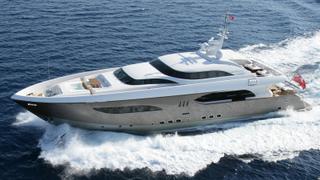 Tamsen motor yacht taTii back on the market

Sold in March 2012, the 40.5 metre motor yacht taTii is back on the market, listed for sale by Burgess.

Built in GRP by Turkish yard Tamsen Yachts to an in-house design, taTii is RINA classed with delivery in 2009. Accommodation is for up to 12 guests in five cabins. The full-beam owner’s suite is situated forward on the main deck while four near-identical guest cabins and two Pullman berths are found amidships on the deck below, positioned around a central guest lobby hosting a minibar. There are a further three cabins in the bow for eight crew aboard this yacht for sale.

Her interior is reminiscent of a boutique hotel, with exquisite design features characterised by zebrano and ebony woods offset by swathes of white on the leather-clad walls. The vast expanse of the main deck saloon is broken only by a partial room divider, while balconies open out of the bulwarks to port and starboard, giving guests clear views out to sea. This area also boasts statement designer furniture, a bar and a Panasonic entertainment centre.

The external living spaces are equally vast, with a spa pool and seating area on the bow and generously proportioned sun beds on the two aft decks. Sliding glass doors on the main and upper decks open right back across the full beam of the yacht, while a sliding glass roof of about eight square metres lets light and air into the upper saloon. In this area there is also a room for eight guests to enjoy a meal together.

On display at the forthcoming Cannes Yachting Festival, taTii is asking €9,400,000.