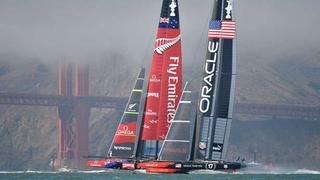 Oracle Team USA has once again kept Challenger Emirates Team New Zealand from scoring the one point needed to cinch the win of the 34th America's Cup.

After Saturday's scheduled racing was postponed, Defender Oracle Team USA continued its rebound sweeping Race Day 12 on Sunday with two wins. Far from straightforward, the races were intense fights to the finish. 'In terms of physicality, it was one of the toughest race days out there,' says Oracle Team USA Skipper Jimmy Spithill. The Defender lead in both races with the Challengers making up time on the upwind leg and charging further on the downwind leg, but by then Oracle Team USA was too far ahead and was able to take the win.

In what previously seemed like a insurmountable lead for Cup victory by Emirates Team New Zealand, Oracle Team USA is chipping away at the scorecard, which now has New Zealand leading only eight points to five. Oracle Team USA has actually won seven races, but it has only collected points for five due to a penalty incurred prior to the start of the Cup Finals. Now New Zealand still needs just one point to win while USA must continue its upward progression and win the next four races in a row.

It will be seen who can pull out ahead now in today's scheduled races at 1:15 and 2:15 pm Pacific Time. The races can be watched live on the America's Cup YouTube channel.