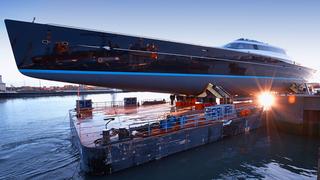 May’s superyacht sales have soared from the April 2015 superyacht market report, while headline-making yachts have lit up tallies in both launches and deliveries, promising exciting sightings in the Med cruising season this summer.

Superyacht sales in May 2015

Superyachts new to the brokerage market

Twenty-three superyachts were reported to us as new to the market in May, down slightly on both 31 in April and 26 in May 2014. The largest was 50m Westport Harmony, launched in 2010 and available for charter. She is followed by 40m Jelana, launched by Sunseeker in 2011 and currently asking €13.5 million. Eight of the tally are UK-built and six of these are Sunseekers.

New superyacht launches in May 2015

Twenty superyachts were launched in May, according to our records, double the figure from the previous month and up slightly on 17 from May last year. The largest was a headline-maker, 147m sailing yacht White Pearl by Nobiskrug, the largest sailing yacht in the world. Next up was another big sailer, 85m Oceanco/ Vitters yacht Aquijo. The largest motor yachts were 63m Benetti FB 265 and the Columbus Classic 57m, from Palumbo. Italy kept its traditional dominance in terms of numbers with half of the tally. Six were Dutch-built.

We know of nine deliveries in May, up on April’s seven but down on 14 in May 2014. The largest was big, 101.5m Feadship motor yacht Symphony, followed by 62.4m Amels motor yacht Madame Kate and 40.16m Princess motor yacht Anka. Four of the yachts were UK-built and three were from Italy.

New superyacht orders in May

Five superyachts were ordered in May, according to our sources, up on just two the previous month but down on nine in May 2014. The biggest was a 49.80m Heesen motor yacht due in 2016, followed by a 35m motor yacht from Arcadia Yachts, due this year and a 31m motor yacht from Balk, due next year. Three of the boats were Dutch, two Italian.