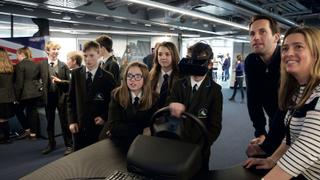 We want to win the America’s Cup in 2021 – and win over a generation of schoolchildren as well, says Sir Ben Ainslie...

There is a massive shortfall in the number of young people studying science, technology, engineering and maths (STEM) subjects in Great Britain. A 2018 report by Engineering UK estimated that the country needs another 124,000 engineers and technicians every year. This means there is a skills shortage in the marine industry, as well as many others. At INEOS Team UK we want to reverse that trend to help ensure the future of the British marine industry long beyond the 2021 America’s Cup. That’s the kind of legacy we want the team to leave.

The team’s charity, the 1851 Trust, uses sailing to inspire young people to shape our future with their innovations. This means sparking their interest in careers that will make a difference, as well as developing life skills such as teamwork and determination – all of which can be achieved through sailing. The trust also uses the appeal of our sport and the America’s Cup to excite more young people about all the opportunities available to them. Getting in early is vital. If we can capture the imagination of young people at the right age and direct more of them into these subjects at GCSE level, then we will get more going on to take A levels and eventually graduate as scientists, mathematicians and engineers.

The trust therefore focuses on engaging schoolchildren from 11 to 14, just before they decide what to study at GCSE – and it does so in three ways: online, locally and nationally. The online part is called STEM Crew, a free online learning programme for teachers to use with pupils. There are introductory films, interactive quizzes, downloadable worksheets and lesson plans. Each one uses the cutting-edge technology and team members at INEOS Team UK to highlight how they use everyday school subjects to make our boat go faster.

Last year, 85,000 students took part in a STEM Crew lesson taught by one of 1,500 teachers at schools across the UK and internationally – three times the number the previous year. Now updated with the technology being developed for our new AC75 boat, the STEM Crew platform is set to bring alive the excitement of our challenge for the 36th America’s Cup. I really hope it inspires the designers and engineers of the future.

This year the trust will launch a new “Rebels” sailing programme inspired by the young sailors Oli Greber and Ben Cornish, who have joined the senior team from the INEOS Rebels youth team. It will give young people the chance to learn to sail – the perfect sport to show maths and science in action, as well as having great value in terms of health and well-being, learning teamwork and improving confidence.

Anyone who has experienced that magical moment when you first take hold of the tiller and get pushed along by a puff of wind will recognise that feeling and Jim Ratcliffe, founder, chairman and CEO of INEOS, was no different. When Jim committed his support to continuing the trust’s work through STEM Crew and the Rebels programme he was particularly keen that they reach parts of the UK where young people wouldn’t otherwise get to try sailing. This year Rebels will be launching in places such as Hull, Hartlepool, Queensferry in Scotland, east London, Liverpool and Manchester – and maybe we can help to change some lives through sailing.