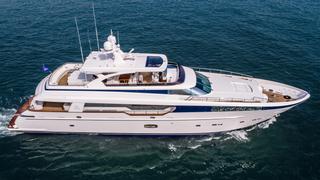 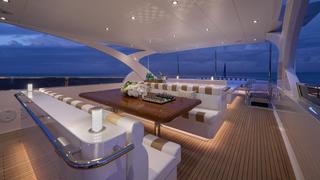 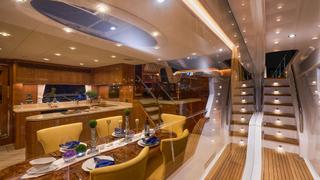 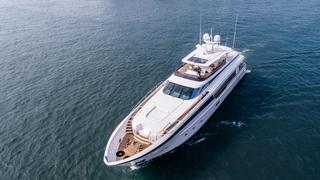 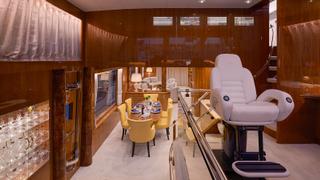 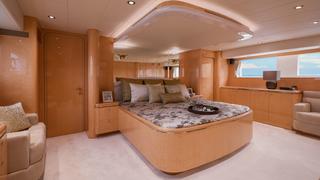 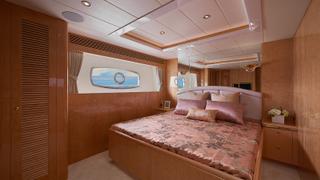 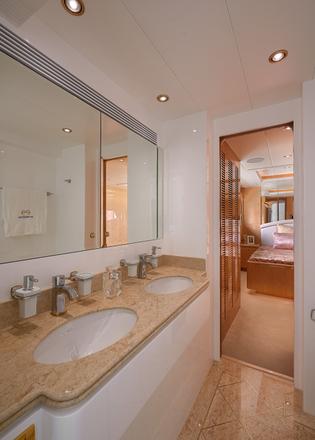 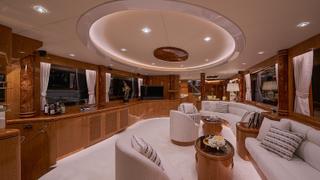 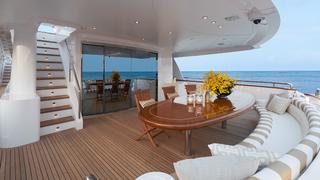 As a yard that builds nearly a third of its yachts for repeat clients, Horizon Yachts is well versed in the fine art of customer satisfaction. However, few clients can be as dedicated as the European owner of 33.53 metre Abaco, who has recently taken delivery of his fifth yacht from the Taiwanese yard to bear that name.

His previous yachts included a 25 metre Horizon and a 27 metre Horizon, which made such a strong impression that the brief for Abaco was “to copy his existing yacht, only with a bigger size”.

The result was the newest member of the Horizon Custom Collection, which began in 2011 with the Espinosa-designed 33.53 metre Lady Gaga.

Despite sharing an LOA with her older sister, Abaco is a whole new animal, boasting a redesigned hull and fresh exterior lines from the boards of German studio Beiderbeck Designs, which converge on the arrow-like prow, giving her a sharp and purposeful profile.

Cutaway bulwarks combine with the floor-to-ceiling windows to up the light levels in the main saloon — a truly open-plan space, which flows seamlessly from the sprawling lounge to the dining area and on to the U-shaped galley and independent raised pilothouse. The lack of partitions has another benefit, as Abaco boasts exceptional views out to sea on all levels.

This spacious, classically-styled interior, also by Beiderbeck, reflects the owner’s wish to give each area space to breathe, rather than cram in as many cabins as possible. For this reason, Abaco accommodates just six guests in three staterooms — a rarity on yachts of this size — ensuring that no family member feels cheated.

That said, the master suite is likely to attract a few envious glances, with the entire 7.16 metre beam utilised. His and hers walk-in wardrobes and an en-suite bath are other key bonuses found in here.

Take a closer look at the Horizon CC110 yacht Abaco

As with any custom project, the development of Abaco was a deeply involved process, but one that the Horizon Yachts team embraced. Owner’s representative Stefan Zucker teamed up with the client in September 2013 and has spent the better part of four years working closely with Horizon on the Abaco project, which he describes as a "friendly, smooth and efficient cooperation". “The communication was excellent and modifications of technical or design aspects were implemented without difficulties,” he adds.

One key area that shows this flexibility is the main deck saloon, which is much larger than you might expect to find on a yacht of this size. Two large built-in sofas to starboard combine with several occasional chairs to allow up to 20 people to be entertained in this refined space.

From here, sliding glass doors lead out onto the aft-deck, with al fresco dining provided around a high-gloss wooden table. Built-in bench seating and three occasional cheers mean that all six guests can easily enjoy an evening meal here with elbow room to spare.

A dozen teak-laid steps lead up to the upper deck itself, which offers both sunbathing space aft and further built-in seating under the shelter of a large Webasto sunroof.

Currently berthed in the South of France, Abaco will spend her debut season exploring the Western Mediterranean — and with a top speed of 24.7 knots and a cruising range of 1,460 nautical miles at 11 knots, she certainly has the legs to do so.