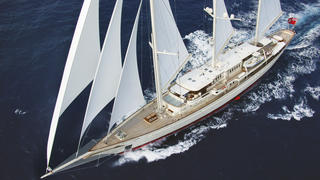 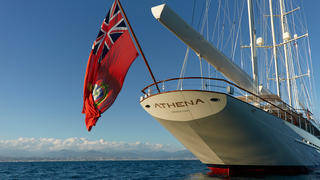 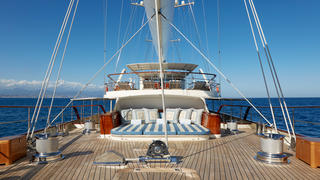 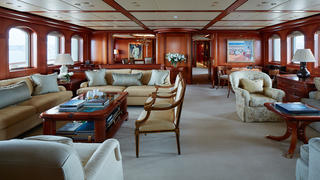 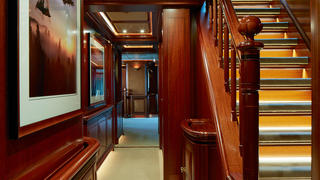 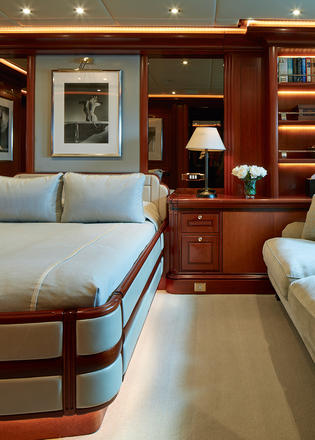 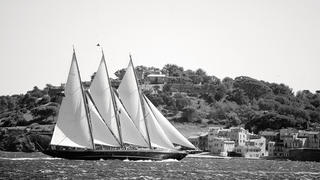 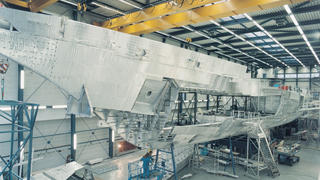 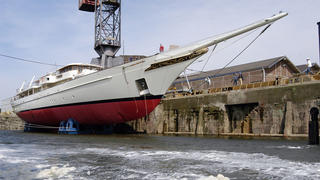 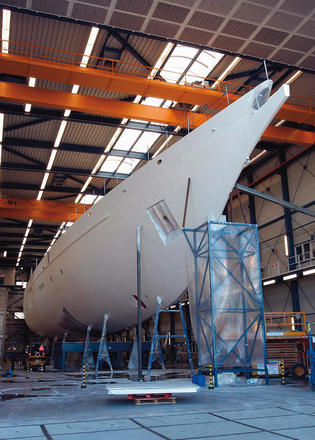 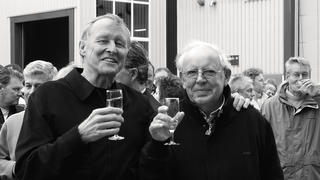 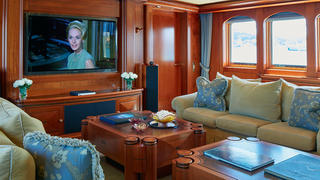 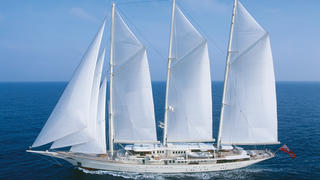 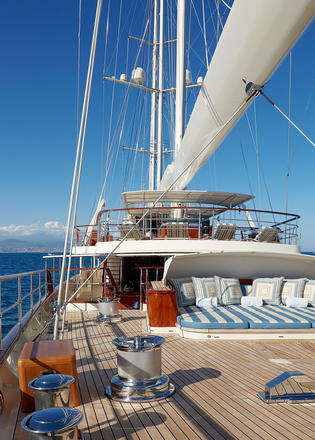 To celebrate the news that the Royal Huisman schooner Athena will be attending to this year’s Monaco Yacht Show, we speak to owner Jim Clark about his enduring love for this 79.25 metre sailing yacht.

“Let’s face it,” says Jim Clark, “you have to be a little bit nuts.” The Silicon Valley legend, founder of Netscape, WebMD and Silicon Graphics, is talking about building his triple-masted schooner, Athena.

There were a few people at Royal Huisman who would have agreed: the shipyard hadn’t even launched Clark’s previous yacht, 47.4 metre Hyperion, when he started talking about a much, much bigger boat. “I guess I was just thinking it would be nice to have something a little more roomy,” he says. “I could easily have built a 50 or 60 metre motor yacht that would have had the same space as Athena, but I was never really interested in building a motor yacht.”

The clipper-bowed beauty that was born of this thinking ranks as one of the all-time great superyachts; as big a hit today as she was when launched in 2004. Twelve years on and Clark is still smitten with Athena. “I love her proportions. To my eye, she’s one of the most gorgeous large sailing yachts, maybe the most gorgeous large sailing yacht in the world.”

The 72 year old didn’t stop with Athena. He went on to build the J Class Hanuman at Royal Huisman and the 30.4 metre carbon weapon Comanche at Hodgdon Yachts (which recently broke the Transatlantic sailing record). But it’s Athena with which he’s most closely identified, a 90 metre nod to a more refined age, yet packed with the kind of tech you’d expect from a man who has made a fortune inventing the future.

We’re talking shortly after a bittersweet period for Clark. He was honoured with the Legacy Award at the 2016 World Superyacht Awards, which followed shortly after the sad news of Pieter Beeldsnijder’s death. The Dutch designer was responsible for the exterior and interior styling of Hyperion, and worked closely with Clark on the interiors of Athena, creating a series of rich but comfortable spaces with a classic edge.

“He was one of my all-time favourite people,” says Clark. “He and I were even talking about doing some other projects together. I would have enjoyed seeing him another time.”

Such was Beeldsnijder’s success in delivering Clark’s vision for the yacht that, all these years later, Clark says he wouldn’t change a thing. “I would design a new boat before I would change Athena. If I was forced to change something, I would convert the office on the lower deck into a children’s room because it’s next to the master stateroom. I didn’t anticipate children when designing this boat, but all that’s changed now! People who come on board can’t believe she’s 12 years old. She’s been very well cared for.”

Clark proudly recounts a story from a few days before our interview. He had been invited aboard a “very large” motor yacht in Monaco’s Port Hercules and, when leaving to tender back to Athena, a young couple got in the boat thinking it was a ferry to shore. “It turns out they were Dutch and I invited them aboard and they were just effusive about Athena compared to the motor yacht.”

The story of how Athena came to be starts on the Amalfi Coast, where, in the 1990s, Clark first laid eyes on Creole. The 63 metre wooden schooner, owned by the Gucci family, was built in 1927 to designs by Charles E Nicholson. “I looked at her and said, ‘that’s a beautiful boat’. Athena as a concept started along the lines of Creole.”

“Prior to even building Hyperion I had also chartered [J Class yacht] Endeavour, so I was always intrigued by that kind of boat. When I went back and thought about building a bigger boat [than Hyperion], I thought why not build a more traditional-looking boat? That’s where Pieter and I started.”

There was never a question about which yard would build it. Jim Clark and Royal Huisman were wed with Hyperion, which at that point was the yard’s biggest launch. Now double it, Clark demanded. But it wasn’t as easy as simply saying “yes”, recalls Alice Huisman, former MD of the company and daughter of the legendary Wolter Huisman.

“When Jim started to think about Athena, I don’t really think we understood his vision,” she says. “Where we saw limits and constraints, he saw none. For example, he pushed her physical dimensions to the point where we had to build a whole new construction hall that would be large enough to accommodate her size.” It was the boat that kept on growing, both parties remember. For Clark, though, it was just about nailing the proportions.

“I wanted it to look right, and it sort of came out where it was,” he says. “I didn’t pay a lot of attention to the actual size, but it needed to have the right accommodations and plenty of headroom. The only thing is I made a conscious effort to connect the cabins with the crew area forward, so I made a passage through the engine room that’s soundproofed; it allows you to walk through and see Athena’s engines. It’s a great feature.”

What Clark could never have foreseen is how Athena would perform as a family boat, which she has ended up becoming. Clark married Australian model and TV personality Kristy Hinze in 2008 and together they have two children. “It’s turned into a very useful boat for children,” he says. “I have a little girl that’s not quite two and a girl that’s four, and on the main deck the side railings are really solid, so you never have to worry. And we put this netting along the poop deck. It’s now a pretty child-friendly boat. We spend a lot of time on board with the kids.”

As well as being the biggest build ever undertaken at Royal Huisman (a record that still stands), Athena was to be Wolter Huisman’s swan song. He died not long after her launch in July 2004. Alice Huisman remembers that her father was “very, very proud” and probably also partly relieved to see her on the water. Athena pushed his shipyard – and him – to the limit.

“As the length approached 90 metres, my father became more and more anxious about how much further he could extend the build hall,” says Huisman. “He even suggested to Jim that he consider another shipyard, but Jim not only knew exactly what he wanted, he also knew with whom he wanted to build it. He was very convincing!”

Clark calls Athena his “world travelling boat”, with three circumnavigations under her belt. “What better way to travel?” His love of scuba diving means itineraries have been dictated by what’s beneath the water. “I spent two one-month periods in Papua, which has some of the best diving in the world. We enjoyed diving in the Andamans. I’ve been in the Red Sea and out through there. In fact, I think we passed through about a week before that first notorious hijack [in 2009, of French yacht Tanit].”

Such extensive cruising is off the table for the time being, with more domestic responsibilities taking priority (“I’ve got a child about to start kindergarten”), but the ambition is still there to explore remoter regions with his family. “I’d like them to get into that 12, 13, 14 age range and then they can be taught to scuba dive.”

He’s got a few good above-water anecdotes, too. “I remember one of our first sails, overnight from Rangiroa in the Tuamotus. I had a bunch of fun movie people on board Athena — Liev Schreiber, Naomi Watts, Griffin Dunne, Fisher Stevens. We were just screaming along downwind on a broach reach, heeled over easy 15 or maybe even 20 degrees. We were having so much fun in the protected aft area, dancing and listening to music. There’s a funny video of that. It was a memorable sail and went all night – we sailed all the way from Rangiroa to Bora Bora.

“Then there was a time in the Med. We had a big party with a bunch of friends in Positano, and in the late afternoon there you get a sea breeze that picks up and blows west to east and you can sail with a slight heel and be doing 12 knots. Sails like that are very nice because it doesn’t even feel like you’re moving. But you’re up on the netting on the bowsprit, looking down and the dolphins start chasing you. Those experiences are unique.”

With naval architecture and rig design from Dykstra Naval Architects, Athena was always going to be a performer, which Clark happily confirms – even if that performance is sometimes unexpected. “One time we were coming off the Turkish coast and the meltemi was blowing and the boat heeled over so far we got thrown out of bed!”

Despite Athena being for sale, Clark is still getting maximum use out of her. The day we speak, he is on board in Monaco, sitting in the bridge. “I tend to work here, at what you might otherwise call a chart table, although there are no charts any more.”

When not working, his favourite spot on board Athena is all the way aft, where there’s a large sunbed covered by an awning. “It’s fun to get under there, out of the breeze, and hang with the children and people and have laughs and drinks. There’s another spot on the upper deck, which is covered and probably one of the nicest spots on the boat.”

The reason she’s for sale is simply time. “I’ve got too many boats,” he says. “I’m particularly afflicted with this disease. I mean, good God, how many boats have I had? A 17 metre Baltic, a 27 metre Jongert, a 47 metre Frers, Hanuman, Athena, Comanche. I have a fishing boat, a 70 foot sport fisher. That’s enough boats but I have loved them all, one way or another. It just comes down to having too many irons in the fire.”

He reserves a special affection for Athena — the biggest boat in his fleet — and if she was to sell tomorrow it would clearly be a painful parting. “I would miss all of her,” he says. And if she doesn’t sell? Well, there’s still a few destinations on his bucket list. “I never made it to Madagascar, and I understand there’s some incredible diving there. And I’ve never been to the Seychelles or South Africa.” Sounds like Athena territory.

First published in the August 2016 edition of Boat International