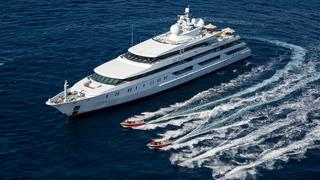 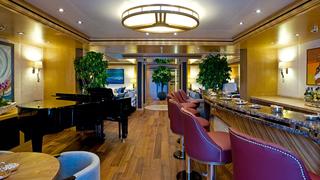 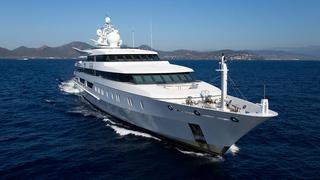 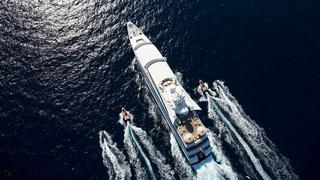 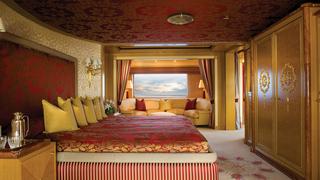 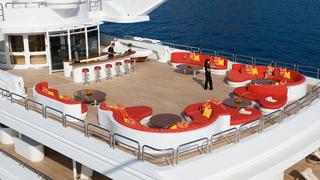 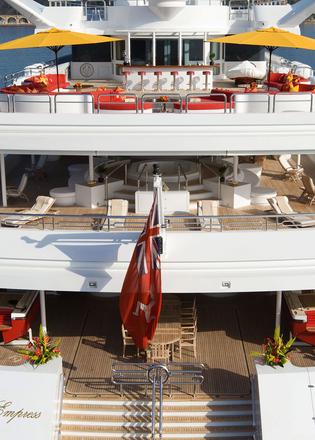 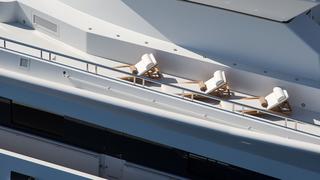 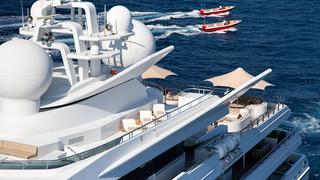 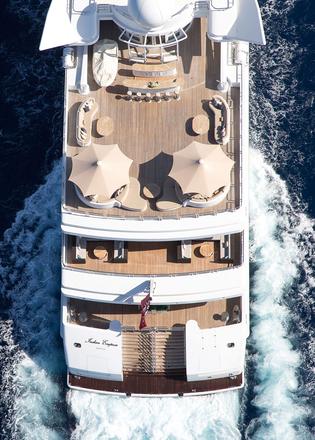 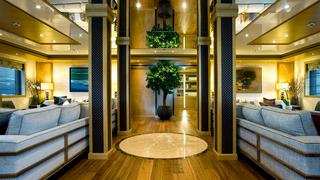 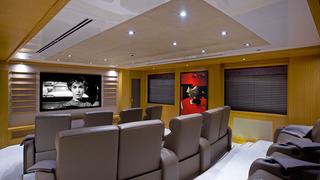 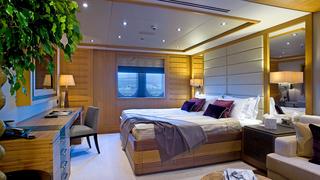 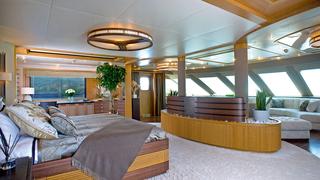 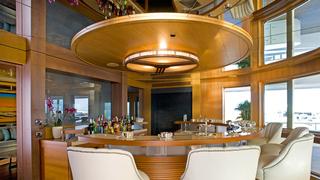 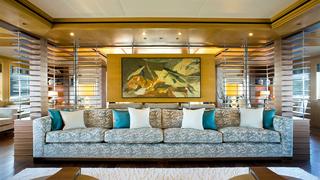 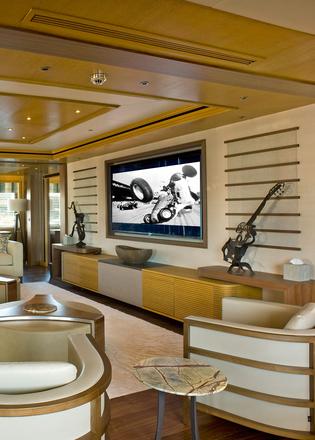 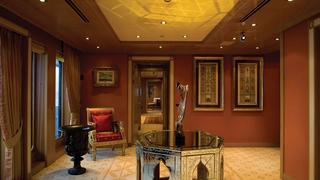 Behind the refit of 95m Indian Empress

The recent refit for 95 metre Oceanco Indian Empress was like the yacht herself: fast, large in scale, and extremely impressive.

The grand piano in the main saloon neatly encapsulates the breadth of change carried out. A sleek black Yamaha Disklavier replaces the decidedly Liberace model, with its highly ornate gold patterns, which used to occupy this area. But like everything else aboard this distinctly personal superyacht, the new piano is quite unique.

Bought by the yacht’s owner at a charity auction to support Elton John’s AIDS Foundation, it was Elton’s personal piano – the one on which he wrote the album Songs from the West Coast. It carries his signature and that of many of his contemporaries on its music stand. It’s the finishing touch to an extensive update that has transformed the look and feel of this famous yacht.

Built in 2000 by Oceanco in the Netherlands for a member of the Qatari royal family, Indian Empress’s current owner bought her in 2006 for private use and charter work, inheriting the Arabic flair of the interior that combined flamboyant deep red and rich gold interior colours with ornate gilt-work and traditional carpets.

Whilst furniture and artwork have changed over his ownership, Indian Empress has mostly maintained its inherited look and style. This, then, was the owner’s chance to weave his signature into the fabric of the craft and really make it his own.

Mark Berryman Design was chosen to design and oversee the £5 million refit.

“I first met the owner on board in La Ciotat (Côte d’Azur) two years ago,” Berryman says. “The boat had a clearly Middle East look and feel, overlaid by an Indian influence. It was no doubt fantastic in its day, but that day has gone.

Indian Empress was heavily chartered as well as extensively used by the owner, and in need of a refresh. My brief was to introduce a more neutral and contemporary vibe that would appeal to a wide charter audience but be governed by the owner’s tastes.”

Several design houses were originally under consideration, with Berryman finally winning the contract last year. “We began work on the GAs in November 2014. With the refit work scheduled to begin late December we burned a lot of midnight oil, but it was nice to be able to demonstrate what can be achieved within a short time-frame.”

The real time challenge, however, proved to be sourcing materials. Lead time on fabrics and finishes is typically 10 to 12 weeks so work had to begin before some of it was even dispatched.

Add uncooperative customs officials lengthening delays and it became quite a task. Berryman dealt with procurement in two stages with loose items sent direct to France to be added once yard work had been completed.

The impressive facilities of Turquoise Yachts in Pendik, Istanbul were selected to carry out the work. “Apart from our experience and expertise, what we brought to the party was speed and flexibility,” says Turquoise CEO Mehmet Karabeyoğlu.

“The owner wanted the boat for July, which gave us a narrow window of opportunity to finish this project, and ideas and alterations were still coming in after work had commenced. Our ability to make decisions on the spot and adapt quickly without reams of red tape was key to the speed and success of the refit.”

This is what Indian Empress looked like before her refit. The old spa pool aft on the owner's deck can just be seen and the old colour scheme seen here has been replaced by a much calmer beige.

Mechanically nothing has changed – nothing needed to. Indian Empress manoeuvres in port via the outer pair of triple MTU 20V 1163 TB93 diesel engines, sequentially turbocharged to produce more than 9,000hp apiece.

At sea the central third engine is brought into play to boost the maximum velocity past 25 knots – an impressive performance by any standards.

On deck the really big change was made at the aft end of the owner’s deck. A huge space-stealing spa pool with grand steps has been replaced by a long, highly polished custom table, capable of seating 24 and augmented by further alfresco dining areas and buffet serving bars.

“We handled a few mechanical details like the side boarding steps and passerelle,” says Karabeyoğlu, “but the change to the aft of the owner’s deck was the big news outside: losing the jacuzzi made a massive difference to the look and feel of the exterior of the yacht.”

Beyond a swap of upholstery colour (from bright red to a more muted beige) on the huge aft sun terrace of the bridge deck above, all remains as was, although there are plans for a new spa pool on the sundeck as well as larger serving areas and windbreaks on the owner’s deck.

Step inside _Indian Empress _to discover the real focus of this refit. Spread opulently across four decks, the interior seduces with contrasting woods (mostly limed oak and walnut), pale neutral colours and large impressive art (including pieces from Picasso and Husain, all part of the owner’s collection).

“Our challenge was matching new with old,” Karabeyoğlu says. “Although the refit was extensive, we retained quite a large proportion of the original panelling, so the new wood had to flow seamlessly. Not just the colour, but the grain and the pitch of the new finishes had to match. I’d challenge anyone to detect what is original and what we replaced.”

That new piano is one of the first things you meet coming through the main-deck cockpit doors on Indian Empress. The pale carpets in this lobby area are gone, replaced by light woods, while square pillars that carried silver motifs are now dressed in classy chequered Majilite, a hard-wearing artificial leather.

Similarly, the larger of the two dining rooms has lost its red and gold panelling and ornate gold lamps to pale wall dressings, and even the complex marquetry around the rim of the two large, curved sweeps of dining table (which seat 24 between them) are gone.

A more significant change on this deck lies between these two areas, where the owner’s office has been converted into a cigar room, while the PA desk and small reception area outside (previously somewhat mid-thoroughfare) are now a cosy library snug.

Once-redundant spaces have been reconfigured to make better use of the Indian Empress’ footprint, such as an area ahead of the main deck lobby. “There was a small Bangalore lounge that never really got used,” says Berryman. “So we suggested a cinema as a great alternative.” Seating 15 on three gently tiered rows, guests can catch a film on the 85-inch screen and relax in the broad leather reclining chairs.

The six cabins on this level, once a mix of doubles and twins, are now all double berthed (five further guest cabins on the lower deck cater for twin berth duties) and feature another useful update.

“When we looked at Indian Empress, TV cabinets 800mm deep and two metres wide contained what must have been the last CRT TVs on the planet,” says Berryman. Banishing these in favour of desks and wall-mounted flatscreens in the cabins offers increased practicality and a sense of space.

Detailing even runs to the cabin doors, where gold handles are replaced by leather-wrapped chrome, while mother-of-pearl inlays make the passageway between them feel more like a yacht and less like a cruise ship.

The biggest changes inside were wrought on the master suite a level above. A bulkhead fitted with a huge TV cabinet previously split the cabin in two, creating a lounge and bedroom and robbing the owner of a view through the forward sweep of windows from his bed.

Flatscreens to the rescue again, as that bulkhead is now a half-height unit housing a retractable TV, allowing this whole area to breathe as one. The rearrangement has also allowed the matching sofas in alcoves either side to be replaced with far more useful desks.

Removing the barrier between bed and forward windows brought its own engineering challenges. Special electric blackout blinds overlaid by electric curtains had to be developed that would stay snug against the inner face of the sloping panes.

Controlled by the same Crestron touchscreen remote that activates lighting and music, it’s now possible to immerse the whole room in total darkness irrespective of the brightness outside. A dressing room the size of a decent guest cabin adds an appropriate adjunct, mirrored by a similar-sized bathroom.

The upper deck saloon of Indian Empress, meanwhile, has had its formality turned down, with the satin woods and pale colours evident throughout the rest of the interior once again present.

It has been split by widely spaced horizontal slats into two more intimate yet still linked entertaining areas. A circular bar (with waterfalls in the bulkheads either side) links it to the new exterior dining area that shelters beneath the bridge deck overhang.

The new bar has proven extremely popular with guests. “We wanted the bar to feel more of an external area so we’ve used slate-look dark granite on the floor and added the waterfalls either side. It’s a great link between the upper saloon and the new outside dining area,” says Berryman.

The upper saloon features satin woods and paler colours than elsewhere, and has been divided by slats into discrete areas. A popular new bar provides a link between the upper saloon and the new outside dining area.

The designer is perhaps most pleased with the bridge deck’s rejig. The massive VIP suite remains, but a lobby behind it has been transformed into an owner’s office, displaced from the main deck.

“I felt that the lobby was so much wasted space. The office suite fits here perfectly and offers a far better solution. We thought that enclosing it might prove a challenge with the air-conditioning, but in fact it works very effectively,” says Berryman.

Big enough to incorporate a workstation for the PA, it’s a haven of businesslike tranquility, and is very important as the owner of Indian Empress takes his yachting extremely seriously, using the vessel more and more for both pleasure and business.

At the Monaco Grand Prix, for example, a Formula One party typically sees in excess of 1,000 people come and go.

Taken piecemeal, none of the changes made to _Indian Empress _during the eight months from initial design to completion is game-changing. New furniture, new wall and floor coverings, a gentle reconfiguration of some of the living and sleeping areas. Yet as a whole the result is completely transformational.

The cosmetic uplift is total, rendering Indian Empress utterly contemporary and bang up to date. But the key is that it works so well on a practical level. The owner has thought through the changes with meticulous detail – perhaps the result of living aboard and using the yacht for nine years – and ended up with alterations that benefit life on board at a scale that far outweighs the work involved.

5 of the best luxury yachts for charter with cinemas