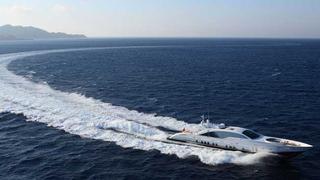 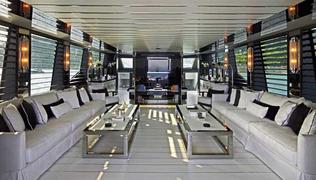 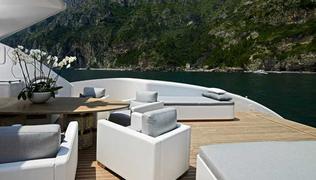 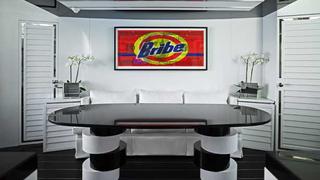 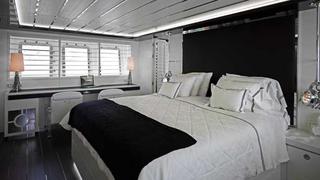 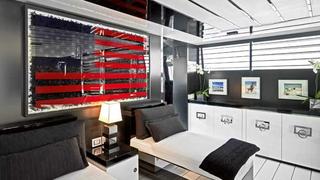 In recent years the superyacht world has experienced a bit of an art deco revival, particularly in the semi-displacement sector where traditional buyers yearn for yachts with traditional looks and are happy to give their interior designers free rein to create lavish period interiors. What is less usual is a modern planing yacht with a deco interior. When interior designer Ioanna Marinopoulos was asked to design the interior of a new Tecnomar 36 metre Velvet called Doubleshot it’s unlikely that anyone can have imagined the result would be as dramatic as it turned out to be, because her designs required not only a delicious deco interior, but also some radical structural changes to the yacht.

The Velvet 36 metre is not a new boat, but Doubleshot is the first of a new breed of Velvet 36s under Tecnomar’s new management, which, under the leadership of chairman Giovanni Costantino, has restructured and modernised most aspects of the business.

The owner of _Doubleshot _wanted something special for his new yacht and asked Marinopoulos to design a practical yet stylish interior. ‘I said to Tecnomar I wanted to design the boat,’ she says. ‘Not just the interiors, but also other aspects too.’

Those few things turned out to be fairly major alterations: Marinopoulos asked for the windows in the galley and on the accommodation deck to be enlarged and made openable, the side windows on the main deck enlarged – ‘There is no point in having the side windows if you can’t see the sea when you sit down’ – and the handrails on top of the bulwarks removed.

The factory had serious reservations about how this would affect the aesthetics of the boat and the RINA classification, but Marinopoulos fought hard and forged a successful partnership with Tecnomar to make her design a reality. ‘From the outside the design looks much better, and gives the impression the boat is like a fish, with big eyes, and that’s why the hull stripes are pulled up at the bow [compared with a standard 36 Velvet] to create a dynamic shape.’

At the stern, Marinopoulos wanted a full-width set of steps down from the cockpit to the bathing platform, creating the sort of beach club area you find on much bigger boats. The total absence of guard rails anywhere at the stern means that the cockpit is completely open and uncluttered – beautiful, despite the safety implications that some might be uncomfortable with.

The radical changes wrought by Marinopoulos are not confined to the exterior, either. Changes to the interior included removing the interior spiral staircase up to the sun deck and replacing it with an external vertical ladder up from the starboard side deck. One of the staircases down to the accommodation deck has also been removed, while the other has been repositioned to the starboard side of the wheelhouse. This means there is no separate crew access to the galley and crew quarters. This, combined with the fact that there is no formal dining area on the main deck (there is a semi-private television area with two chaise longues where you’d expect the dining area to be) means Doubleshot has a very informal, family-oriented feel. This informality makes for a boat that wouldn’t be suitable for chartering, but the upside is_ Doubleshot_ really feels like a friendly family boat.

There are further galley facilities in the crew area, so most of the preparation can be done in there, and the meals served in the family galley-diner. With its very large openable windows the galley-diner is quite unlike any normally seen on a 36 metre – instead it’s light, bright and spacious.

On the accommodation deck the anomalies continue. One of the twin cabins has been divided into a single cabin (with an additional Pullman bunk) and a laundry room for family and guests (there’s a laundry area in the crew quarters, too). There is a children’s cabin with bunk beds, two twin cabins for family/guests and a sumptuous master suite aft, but no VIP double. Again, this is a boat for family, not for trying to impress other people.

An art deco interior was what was asked for, and that’s what Marinopoulos set out to provide. The colour scheme is black and white, and the deco details are everywhere – door and drawer handles, sofas and chairs, the coffee tables and the lamps, but there isn’t a slavish devotion to the style. Contemporary artworks add depth and texture to the interior, as well as playfulness and humour, and there is delightful detailing everywhere.

Earlier Velvet 36s have tended to be quite dark inside, but the changes to the windows on both decks mean that Doubleshot is flooded with natural light, and the predominantly white colour scheme helps to emphasise the brightness and feeling of space. The unique layout of this yacht, with its lack of formal dining area and its galley-diner, gives a wonderfully relaxed feel to the boat. This is a yacht clearly designed to be a comfortable and friendly place for a family to spend time together, and the informality of it is very refreshing.

Despite the yard’s initial reluctance to make changes to the Velvet 36, some of them have now been incorporated into the standard model and will be offered to all clients. The bigger side windows on the main deck are a triumph, offering fabulous views out over the water, and the beach club stern is a wonderful way of bringing together those in the cockpit with those on the bathing platform.

Doubleshot is a unique and highly individual yacht, combining a delicious deco-style interior with a layout specifically tailored to the owner’s needs. The attention to detail, the informality and the functionality of the yacht belie its relatively modest size and the finished result is light, bright and joyful.