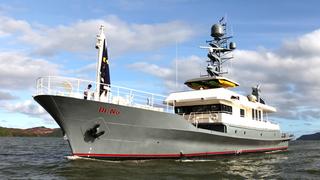 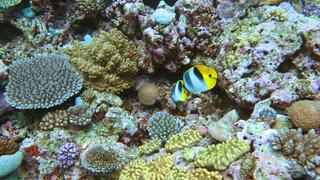 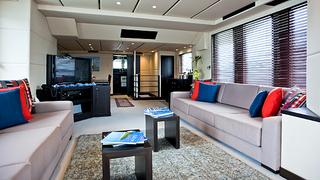 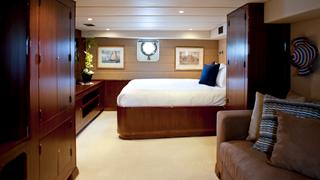 Dr No - a yacht designed for an underwater exploration

Sitting on the aft deck of Dr No, lying at anchor off the bliss-inducing island of Amédée on the south eastern tip of New Caledonia, the yacht’s owner, Tom Perkins, was in reflective mood. During his long career in Silicon Valley, California, he administered the research department of Hewlett-Packard, later becoming a director of that company, and he co-founded of one of the world’s most successful venture capital firms, Kleiner Perkins, Caufield & Byers. Despite such notable business successes, he feels that it will be his build of Maltese Falcon for which he will be remembered. Arguably, he is right.

Following the completion of Maltese Falcon, Perkins cruised widely and raced his yacht, but missed the mental challenge posed by its construction. But after meeting Graham Hawkes, an ocean engineer and inventor, he found another. At the Monaco Yacht Show in 2006, Perkins came across a prototype two-man submersible – that could dive to 300 metres and remain positively buoyant – literally ‘flying’ underwater, a concept that made existing recreational submarines appear rather dated.

‘How could I resist?’ he asks. ‘This revolutionary craft, which had fingertip steering and a 10 knot underwater speed, was the DeepFlight Super Falcon and it was being built near my home town of San Francisco. I visited the workshop and met Graham.’ The craft seen in Monaco was a successor to Deep Flight 1 and was intended to reach the deepest part of the oceans. Subsequently, Hawkes built the Super Falcon for himself and it wasn’t for sale, but Perkins soon persuaded him to build a second craft that was shipped to join the Maltese Falcon.

Operating the submersible from the foredeck of Maltese Falcon was not ideal, but it was made to work. In time, it became clear that it was the submersible, not the yacht, that grabbed Perkins’ interest, so he resolved to sell Maltese Falcon and build a custom vessel from which to operate it. But plans change. With the Maltese Falcon sold and a new submersible support ship in design, a medical scare persuaded Perkins that this route was too time-consuming. The alternative was to buy on the brokerage market, and in November 2010 he asked his Australian captain, Christian Truter, to source an existing vessel that could handle the sub.

Truter was shown the ex-Japanese Fisheries training ship Wakachiba, converted into the explorer vessel Blue Hunter by HYS Yachts in the Philippines. Clearly, more work had to be done to make her suitable, but she was robust, seaworthy and had a suitably sized well- deck forward already equipped with a 3.5 tonne hydraulic crane that was eminently suitable for launching the sub.

Perkins was impressed by the knowledge and commitment of HYS Yachts, who satisfied him that the yard had the capability make the necessary substantial modifications by the end of June, just six months away.

This first phase to what was described as an ‘entry-level explorer yacht’ was enormous in scope. Given the vessel’s good condition, little had to be done in the engine room except to re-route the main exhaust that originally rose to a single dry stack located centrally, aft of the bridge. This area was the location of the new main saloon, so the exhaust was split into twin stacks that would pass either side. This allowed for the construction of a large, comfortable room with panoramic views through windows to port and starboard, and through the fully glazed, sliding doors that open to the aft deck.

Stairs descended from the forward part of the saloon to what were formerly officer, crew and cadet quarters, partly set on a mezzanine level. HYS converted the mezzanine into a full-beam master suite with an adjacent dining area, while four further cabins were positioned on the lower level: a VIP with double bed, a further small double, a twin-bunk cabin and a four-bunk cabin, the latter two sharing a bathroom. Crew were to be accommodated aft in a four-bunk cabin adjacent to a small crew mess and a completely new galley.

Between Perkins’ visit to the completed Blue Hunter and the start of work to convert her to Dr. No on 26 February 2011, he and Truter assembled a 28-page refit specification detailing the work required. Designed to bring the vessel closer to superyacht standards, it focused on five areas: accommodation modifications; engine room and mechanical work; modifications to exterior areas; new instrumentation for the bridge; and re-labelling all signs in the vessel from Japanese to English. It was a very long work list for a short space of time, but the price was right and the contract was signed. Showing his confidence in the yard, Perkins invited guests for a first cruise in Palau on 23 July, five months away.

The captain remained in the yard to supervise the work, soon under way in the sticky heat of the Filipino dry season. The major interior tasks related to the deck-head height in the master cabin – sized for people of smaller stature than the new owner – and rebuilding the crew area, designed for Filipino crew who would not mind sharing a four-berth cabin and eating wherever they could find a space. Increasing the master suite headroom by seven centimetres was accomplished, a larger bed was built and installed, and just outside the door, the casual dining area was converted into an owner’s study and library.

The layout of the crew area and one of the store rooms in the stern was completely reworked to create three separate en suite cabins – a captain’s double, engineer’s cabin and twin-bunk crew cabin – together with a comfortable mess area equipped with entertainment and internet systems, all built to European standards. A laundry room was also shoehorned in. In the guest area, the four-bunk cabin was converted to a ship’s office and video production room. The yacht now boasts comfortable accommodation for the owner plus six guests (with two further emergency bunks available in the ship’s office) and good accommodation for six crew.

Modifications to the exterior and storage spaces were also extensive. On the well deck, the crane was ideal for launching the submersible, but the former fish holds just below the deck needed modification. Racks were installed to carry scuba gear, including a convenient air-bottle recharging system utilising two compressors and a high-pressure air bank, as well as a workshop with manufacturing capabilities for spare parts.

Even with the engine room’s new mechanical installations and the new bridge navigational, the refit project came in just on time and on budget. More importantly, it won the approval of the owner. This was an amazing achievement in such a short space of time, and one which, Perkins fully acknowledges, could not have been done without the skill and dedication of HYS’s management and workers, nor without the eagle eye of Captain Truter.

Renamed and right on schedule, the glistening Dr No left Subic Bay on 16 July 2011. The Palau cruise was successful, as were the expeditions that followed to Raja Ampat, Indonesia and Dr No's adventures in New Caledonia with owner Tom Perkins aboard. Next is a scientific expedition to Tonga, where Perkins hopes to follow humpback whales as they dive to the ocean bed. No one has yet achieved this, but in the cool hands of Tom Perkins, Dr No and her sub may well be the first.