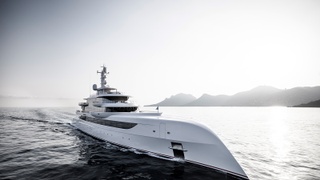 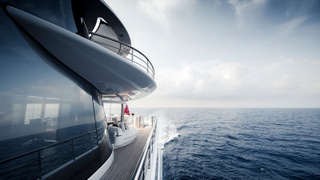 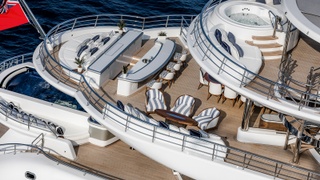 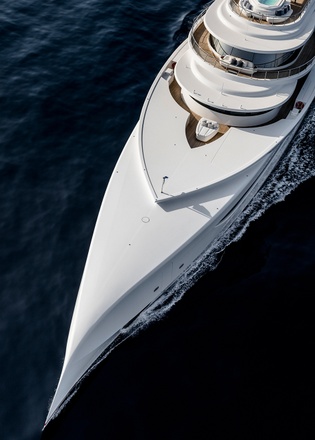 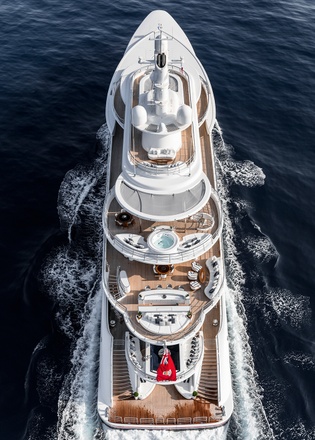 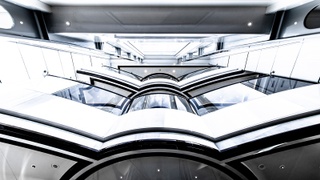 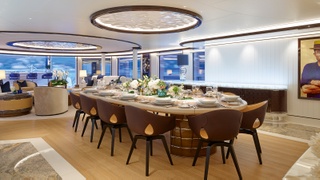 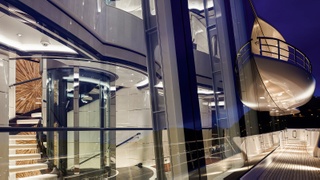 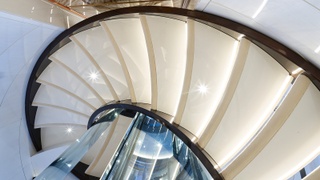 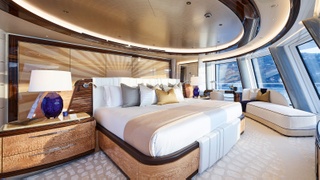 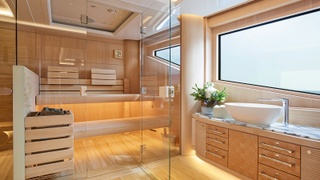 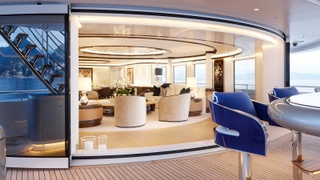 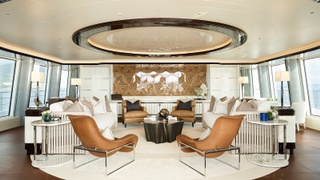 Excellence: On Board the Abeking & Rasmussen 80 Metre Superyacht

An owner thought his 60-metre yacht couldn’t be bettered – until he saw an 80-metre model at the 2015 Fort Lauderdale show. Four years on, that owner has taken delivery of his Excellence, as Sam Fortescue discovers.

What do you do when you think you’ve built the perfect 60-metre yacht? Well, naturally, you start again with something even bigger. Or at least that’s what the American owner of the Excellence series of six yachts chose to do. “The 60-metre yacht that I had, Excellence V, was in my opinion the most beautiful, high volume, best performing yacht of her size that I was aware of,” he tells me. “To build another 60-metre that was better, I believed was impossible. I decided to move up to 80 metres and a more contemporary design. At one of the yacht shows I saw a rendering of a design that was to be a Winch/Abeking joint venture. I fell in love.”

Excellence's hull stretches back 10m before reaching the level of the main deck. She also has a bulbous bow below the waterline to aid buoyancy and wave-breaking Photography: Guillaume Plisson (exteriors); Winch Media (interiors)

This begins the rapid-fire story of the sixth Excellence, perhaps the most striking yacht ever to leave Abeking & Rasmussen’s yard in Bremen, northern Germany. With her heavily reversed bow and acres of sheer glass windows reflecting back at me like a pair of aviator sunglasses, Excellence stopped me in my tracks as I gazed at her across the River Weser. In fact, work on the boat was in progress several years before the owner decided that he wanted a new yacht, and long before she would become the sixth Excellence. Andrew Winch’s design office had teamed up with Abeking to produce a radical concept. “The owner saw a preliminary model at the 2015 Fort Lauderdale Boat Show, and said, ‘I want that boat’,” recalls Winch when I meet him in Bremen to tour the yacht. “He came to us because we helped him step out of the middle market and out of his comfort zone. He’s had to be extremely brave and question whether he will like it in the end.”

At this point, the design had some of its key features in evidence – that bow, the huge areas of glazing and the flying-saucer-shaped pods fore and aft of each deck. But in other ways, it has changed dramatically, growing shorter and losing its proposed helipad as the curve of the bow was stretched further aft. The process was surprisingly quick. “After so many builds the owner is a very experienced specifier,” Winch says. “He works with a tick list and thinks it through methodically.”

Somewhat counter-intuitively, the best place to really understand the striking exterior of this yacht is inside – the mezzanine on the owner’s deck to be precise. Here, two decks have been cut away, so that your gaze falls 10 metres to the main deck below when you peer over the balustrade. The five-metre-tall sheets of glass that form the mirrored external skin of the yacht are displayed in all their glory. Two slim steel frames are the only support for the edges of these vast panes. It is a view into the heart of an engineering problem that Abeking & Rasmussen at first considered too difficult to solve. “It was a nightmare,” says senior project manager Jens Bottke before remembering himself. “Really a challenge.”

Despite the expansion and contraction of the aluminium superstructure, and the obvious movement caused by the yacht’s motion, it was not the fixing of these 1.3-tonne glass panels that presented the greatest problem. It was the fact that they needed to be perfectly rigid on the outside, so as not to distort the mirror finish, and provide excellent insulation to spare the yacht’s air conditioning. “The glass packages are actually four to six panes, complete with insulation layers and finishes,” Bottke says. At their thickest, they are 8cm thick. Add to that the need to create three-dimensional curves in places and you have a huge challenge that could be overcome only by using German technology and Italian engineering.

Heading out on to the side deck, I marvel at the 25-metre line of perfectly smooth glass. Bremen’s industrial riverscape is perfectly reflected from top to bottom. This blemish-free exterior hides other design and engineering feats, too. The life rafts are hidden in a bulwark cabinet so as not to spoil the yacht’s majestic lines. And you won’t find any hint of a ventilation louvre in the exterior, either. They are all disguised behind mirror-finish stainless steel, blending in perfectly with the windows. Abeking also had to design some smart exterior doors to account for the superstructure’s bevel and curvature. Each set uses a slightly different mechanism, swinging silently open on different-sized arms or gliding out on a single curved support. “I think there’s only one standard exterior door on the whole yacht,” Bottke says. “Structure and design-wise, it’s been our most challenging project.”

Challenges aplenty awaited inside, too: from details such as how to make an electric blind for a window that gets thinner as it goes up, to weaving filaments of precious silver into a composite that resembles metallic carbon fibre. The unifying theme for the interior is luxury cars, a nod to the origin of the owner’s fortune in car dealerships. “The boat has car detailing throughout,” Winch says. “There are many things you might recognise.” Those range from the black-and-white concentric circles on the saloon floor and ceiling that recall the tyres of a classic car, to the double-stitched leather detailing in the cabins. The ventilation louvres in the cabins are designed to look like the grille of a bonnet, and there are tyre-track patterns carved into the wooden panelling of a dayhead.

The interior strikes a balance between splashes of bright colour and dignified coffee tones – a bit like one of the owner’s favourite sports cars, in fact. Besides noble woods and fine Italian leathers, marble is the stand-out material on board. “There are more than 30 different marbles on Excellence,” says Winch interior designer Lizzy Hart. “And about 30 per cent is golden onyx.” The honey-toned stone is quarried in Chile and appears everywhere aboard – from the main guest corridor to the his-and-hers owner’s bathrooms. Here, the effect is particularly striking: the space glows as if it contains a hoard of gold.

Every cabin has a unique character, with its own feature headboard, and every public space has a rarefied list of marbles, precious woods and leathers. There are woods I’ve never heard of – tamo ash, blue ombre rippled sycamore, amboyna burr – and novel leather finishes. Minute detail is everywhere you look. In the owner’s suite, it is Macassar ebony panelling, wool carpets with crocodile pattern by Oliver Treutlein, and woven silver wire that makes the window mullions look like precious carbon fibre. And yet practicality is never far from the surface. All the high-tread areas are in limed oak, for instance, not vulnerable carpet.

Clever use of mirrors throughout the interior serves to extend sight lines and broaden perspectives. In the main saloon, for example, mirrors behind the louvres make the casing around the ventilation shafts disappear. There are also thin mirrored strips all the way around the top of walls in the cabins, which fool the eye into seeing more space. It has meant being equally cunning with the use of indirect lighting. Though the owner has made allowances for guests because he runs Excellence as a charter business, he was adamant that the boat was built entirely to his own taste. “Excellence was built to be a sporty, modern, comfortable yacht that could become a classic,” he tells me. “The interior is not designed for charter – it is luxury with tremendous space, beautiful fabrics and is comfortable to spend time on.”

All the same, he knows some of his guests will need to work, so he has put in a library/office where previous Excellences made do with a desk in a corner. There are tobacco leaves on the wall here, pressed into a rich pattern and trimmed with laser-cut silver leather. Birdseye maple is the feature wood, alongside cappuccino marble and tan leather tiles underfoot. It is a very calming space. And he specified the six guest cabins to be 25 square metres and of very similar comfort, to avoid any competition for “the big cabin”. The gym on the main deck had to be bigger than on the previous boats, and the spa area is among the brightest I’ve seen, with great views out of the sauna through the huge windows. There’s also a dedicated nine-seat cinema.

For all the richness of the finish, the atmosphere on board is comfortable and convenient. Take the main saloon, where you are greeted by deep cream-coloured sofas and a 1.8-metre-diameter coffee table. As we sit down, I have to check the natural urge to put my feet up. The owner anticipated this and requested golden onyx for the rim of the wooden table precisely so that it would resist wear and tear. It’s taken for granted that guests here will feel able to put their feet up. On the bridge deck, aft of the 14-seat outdoor table, there is a relaxed bar. And so it doesn’t block the view, it is sunken into the deck allowing guests to look over the top. The pool on the main deck below has removable bar seating in it, with more bar stools on the other side of the bar. This same pool also spreads dappled light on to the beach club below through a glass floor panel. Most guests will approach in this way, so the owner insisted on a space that at once welcomes them and showcases all the delights the yacht has to offer. He’s done away with the usual fold-up transom door leading into the bowels of the boat: Excellence features instead two curved sliding doors that give access from the large beach club into the tender garage.

And before you snort, realise that this is no ordinary garage. It has been designed and fitted out with a bar, comfortable seating and lined with the yacht’s best toys. As you step aboard, you spot the dive gear and wetsuits, Seabobs and RS200 sailing dinghy. You’re already excited about the experience that lies ahead. “I have spent a great deal of time on yachts and it is truly my passion,” the owner says. “I love spending time on board.”

The boat started in the Med and at time of press was due to cross the Atlantic to make the Fort Lauderdale International Boat Show – she easily has the range to do that. With this project, the owner has completed a different sort of journey, building a yacht that will look edgy for decades to come. And though he is clearly very proud of the result, there is one thing he didn’t get quite right: “I felt the design would be very polarising, but I was wrong,” he tells me. “It appears that better than 90 per cent of the comments are extremely positive.”