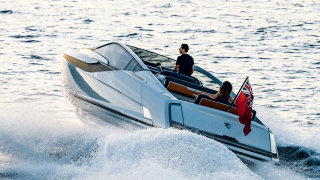 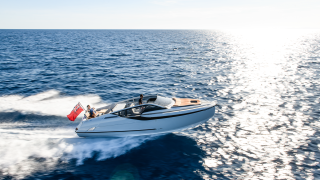 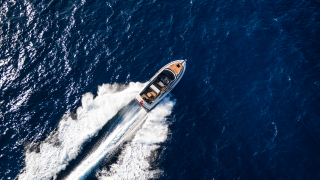 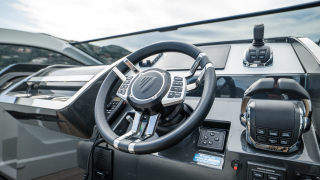 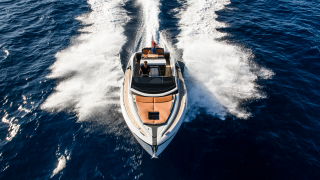 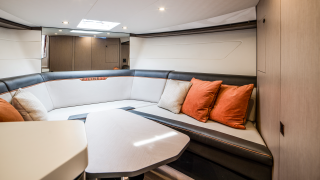 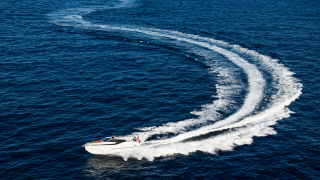 Standing at the helm of the F//LINE 33, wind rushing through my hair, I get the nod, that subtle signal that means “go ahead, open up and let her rip”. I push the throttle and we take off like a rocket over the flat calm water off Cannes. As the speed creeps upwards of 30 knots, I let out a “Woohoo!” – and I don’t feel the least bit embarrassed about squealing like a child. The F//LINE 33 from UK builder Fairline Yachts is simply great fun to drive.

A key part of that is ease. Sometimes a boat that’s designed to be speedy can be downright overpowering, but the F//LINE 33 is a breeze to drive. The ride is smooth and the boat turns on a dime, but you can still feel the thrill of speed beneath you.

While great performance and facility should be synonymous, it’s not always the case, and much credit should go to Fairline for pulling it off with the first entry in its new F//LINE series of modern, stylish dayboats. The introduction of the 9.99-metre F//LINE 33 ushers in a new range of sportier, sassier Fairline boats that are not planned to exceed 12 metres LOA – putting them in superyacht tender territory.

The blend of performance and simple operation was baked into the brief for the F//LINE 33. The UK builder wanted the new boat to be a multitasker: exhilarating or calm when needs be; capable of high speed, but not an out-and- out raceboat. “Whether the owner has young children on board or wishes to experience the thrill of speeding at 48 knots, we wanted to give them the freedom to have any boating experience they want,” says Wayne Huntley, Fairline’s head of design and engineering.

Even being height-challenged as I am, I can clearly see over the helm. Seated, you are protected by the generous curve of the windscreen, which connects to glass cut-outs so there are views even while sitting down. And there are plenty of places to perch apart from the helm. Rear- and forward-facing benches can slide together to create a giant sunpad, in addition to the sunpad on the bow.

There are four power options – hull No 1 has twin Volvo Penta V8 stern drives at 430hp each. The speed was expected to be 45 knots for this option, but she’s been reaching speeds of up to 48 knots, and Fairline’s technical services director Martyn Hicks is confident more can be attained with high- performance propellers.

The ride is smooth, dry and near-flat when planing. J&J Design, which worked on the Fairline Targa 45 and 48, carefully planned the naval architecture to achieve this. The F//LINE 33 has a sharp entry and a deep-V hull, but flattens off at the back. When you hit a wave, she rides through it; there’s no sudden thud. And though you’ll feel the g-force when entering a turn, there’s no uncomfortable sensation of tripping over a chine. Full-length, moulded spray deflectors help keep things dry inside.

“She also needed to be an individual – a head-turner,” says Hicks. For this, Fairline called upon Alberto Mancini, who helped develop the exterior design, layout and detailing. “It needed to be different to a traditional Fairline,” adds Hicks. “It needed to look different. We wanted the F//LINE brand to stand alone, not to look like a Targa.” It had to look equally well-placed whether cruising on an Italian lake or speeding off the South Florida coast.

Inspiration came from sports cars, specifically classic British sports cars of the 1960s – an era that Mancini is passionate about. The bright white hull is cut with distinctive lines to give a sense of drama and speed. A sporty strip of black detailing runs from the bow to the centreline, curving up and widening at the end. It almost looks as if the boat is smiling.

Though it is a bold new flavour from the British builder, the F//LINE series still maintains signature Fairline family tells, like the line that runs from the bow, turning downwards to indent close to stern. Other items are borrowed from Fairline’s big sisters, like the clever pantograph hinges, taken from the new Fairline Squadron 68. “You can identify the clear Fairline DNA,” says Huntley. “Mancini has seamlessly incorporated these into the F//LINE 33’s design.”

Fairline’s brief that it be usable and comfortable – suitable for overnighting and daytime fun. Inside, there’s an aft cabin, bathroom and a forward sofa that transforms into another berth. “We wanted to provide an open feel and we’ve used mirrors to create the feeling of more space,” says Huntley. The mirrors do their magic, and there is also good headroom.

Constructed in GRP, Fairline revamped its production methods in order to reach its goal of building one F//LINE 33 per week. Normally, the hull and deck are joined early in the build. But now, the boat goes topless further up the production line, “almost to the point of fitting carpets in the cabin before the deck is put on”, says Hicks. The idea is that this way, it’s easier for more people to work on a boat at once.

Following debuts in London and Cannes, Hull No 2 has made its way to the US for boat shows. Family-friendly, fast and fun to drive, the F//LINE 33 has certainly set the pace for Fairline’s new line.