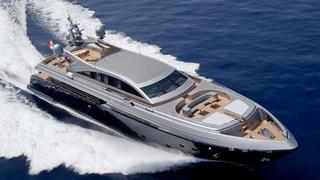 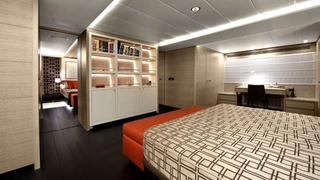 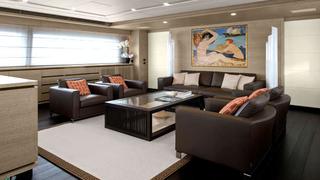 Framura 3 is the sixth planing sports yacht constructed by Italian yard Codecasa, as well as being the second model for the same owner and the largest model in the S range built by the yard. Codecasa inaugurated the sports yacht series in 2004 with a 35 metre. The range stretched in dimensions in 2007 with the launch of a 41 metre, followed in 2010 by Framura 2 (now renamed Tenshi), a 45 metre. Today, the dimensions have stretched to 50 metres with Framura 3, and many innovative features added.

Fascinated by the sporting line and by the possibility of fast crossings, the owner of Framura 2 asked the yard to start construction on a larger sports yacht with one extra deck, but without spoiling the aesthetic concept seen on the previous vessel. This was not an easy task, but the designer created a profile for Framura 3 that satisfied the owner's wishes as well as offering an interior volume that was significantly larger and more comfortable.

The owner of Framura 3 requested large, light spaces for the interiors, generous outdoor areas and considerable power to allow speedy crossings. The yard achieved these results with the collaboration of naval engineer Andrè Bacigalupo and architect Della Role, which designed the interiors in co-operation with the owning groups interior designer. Obviously, to obtain the power required by the owner it was necessary to contain the weight, even though the three MTU engines are extremely powerful. The yard took this into account and showed its ability to construct with care, following careful procedures at each phase of the production, allowing a precise distribution of weight.

The new record length of the sporting series is 50 metres, but compared to the previous model there are also significant advances in other areas, such as range, which stretches from 450 miles aboard Framura 2 to 1,000 miles on her successor, at a speed of 18 knots. It is a significant advantage for those who like fast crossings without having to plan a refuelling stop along the way. The engine power naturally grew in tandem, with a total of 7,800hp divided between three MTU engines of 2,600hp each. The maximum speed of Framura 3 is 28 knots, as the captain confirmed to us during one of the stops this summer while cruising with the owner.

Inside, Framura 3 offers a lot of space for this range. The owner’s suite, on the main deck, is a particularly welcoming environment thanks to its full-beam dimensions with a central bed, a vanity area to port and a relaxing area with an armchair with stool/footrest to starboard. There are two dressing rooms, two bathrooms, direct access to the gym, access to the owner’s study and even a balcony for the suite.

The stern area of the lower deck houses the garage with a tender and a port lateral opening for launch and docking, and further aft still, the well-equipped engine room. As with Framura 2, Framura 3 has an engine room in which one could spend hours admiring the equipment, engineering and the organisation. The yard has transformed many elements that are usually neglected visually into objects beautiful to look at. Waste collectors, containers, handles, floors. Everything has been done to transform an engine room into an aesthetic environment that falls in line with the yacht's general beauty.

"Three years ago, when the representative of the owner's group of Framura 2 asked about our availability to build a new Codecasa 50S, I felt such a surge of pride," recalls Fulvio Codecasa, the yard's owner. "As well as offering the possibility to extend our range of sporting yachts, a difficult sector we entered a decade ago, I was happy with the idea of continuing to work with a team of people I appreciate greatly. And the greatest satisfaction a person in my position can have is that an owner, even of an extremely new yacht of ours, returns to us to build another, renewing his trust and his esteem."

Roberto Dalle Mura, Framura 3's project manager, confirms these sentiments: "Each yacht that I supervise absorbs me for months and sometimes years. In the case of Framura 3, the construction kept us busy for two-and-a-half years. There was an intensive collaboration and total trust between our staff and that of the owner's group. We always worked closely together, exchanging opinions, experience and ideas with one common aim: to build the best possible product for the owner."

After such a long period of involvement, a few features stand out for Dalle Mura, including how quiet Framura 3 is. "The yacht offers a very high level of comfort, thanks in part to the gyro stabiliser system made by Ship Dynamics and mounted in the machine room. During the construction process we made it a priority to reduce noise; we obtained a very low noise level in general, but at maximum speed, Framura 3 has less noise than usual on a full-displacement yacht."

Another interesting element is the panoramic sea balcony into the owner's suite, which is able to offer the owner a private area in the open air, especially when the yacht is spending time at anchor.

That the S series has reached 50 metres seems an important threshold: in less than 10 years, six yachts have been created based on the same naval concept and each one bigger than the last. With the yard's enthusiasm for the series matched by that of the market, it is easy to imagine that it has a way to go yet.