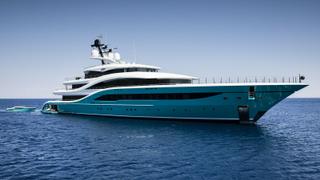 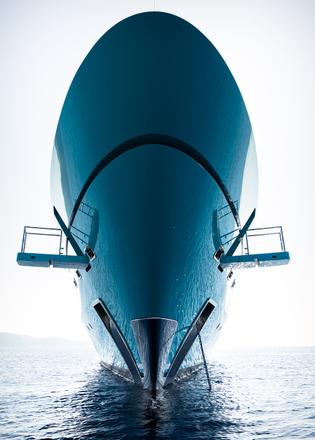 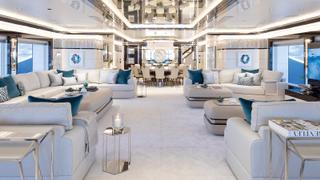 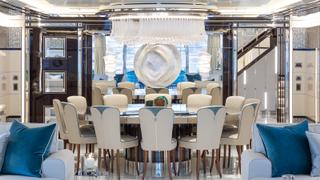 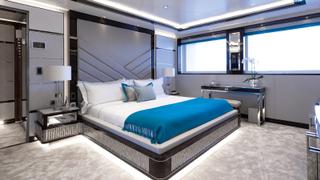 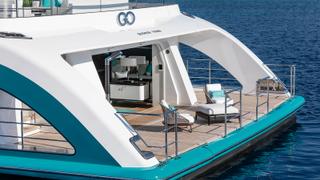 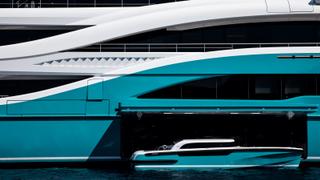 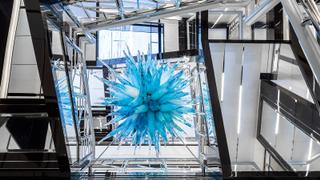 Turquoise Yachts’ new 77 metre flagship shows off all of the Turkish yard’s skill and craft, says Clare Mahon – and a rather special hull colour

“There was something about GO’s owner that I understood from the moment he walked into the shipyard,” says Mehmet Karabeyoglu, Turquoise Yachts’ CEO.

Even by the standards of superyacht owners, this man was particularly bold and decisive – two values the shipyard head appreciates. Karabeyoglu inaugurated his shipyard in 1997 by starting a 50 metre on spec; it was the largest yacht construction in Turkey at the time. “The contract [for GO] was all very quick because he’s a very [decisive] man. And here we are, just a year and a half later, with a brand new superyacht and our largest launch to date,” he says. As for the owner, building a 77 metre as your first yacht is one seriously bold stroke.

Turquoise had already begun building what would become its new flagship before the owner stepped in. “We always [begin] on spec because it saves owners so much time,” says Karabeyoglu. The yard hired London-based H2 Yacht Design to draw a distinctive yacht with Turquoise DNA. “After Mehmet’s partner passed away and his shares were bought by Oceanco owner Mohammed Al Barwani, the yard was looking to relaunch with a new flagship,” says Jonny Horsfield, H2’s co-founder. “GO is the seventh yacht that we have collaborated with Turquoise on, the most recent being the 72 metre Vicky. That was our starting point and from there we updated the look, keeping the design flexible enough so that a new owner could really put a personal stamp on it.”

GO’s aluminium superstructure features sculptural curves that swoop down through the deck levels and end in an arch that plunges to the waterline. But noteworthy as these are, GO will most likely be remembered for her hull colour: a show-stopping shade called Island Turquoise. “The turquoise is a theme that’s carried through the yacht,” says Ruth Thomas from H2.

“The design concept of the yacht is based on water in motion, so shades of turquoise made sense.” While moving water is the concept and turquoise is the theme, another element is repeated throughout the yacht: a chevron-meets-basket-weave pattern that turns up carved into carpet pile or etched into the mirrored ceiling of the main saloon. “When the owner bought the yacht,” says Horsfield, “he kept the general arrangement plan but decided to up the ante on the décor and make it more lush. We only had three months to do the redesign.” Karabeyoglu says that “we added 10 tonnes of mirror-polished steel for the interior details and inlays that he wanted, so much weight that it required re-engineering the yacht”.

In the saloon, white carpet, leather-covered walls and Tanganyika veneer are topped with sculpted metal bands that recall flowing water. The windows are so many and so large that the owner, a huge sports fan, had no qualms about placing a 100 inch Sony flat-screen TV in front of one.

The main dining area is a compendium of the yacht’s decorative themes: the chevron in the flooring is in stainless steel strips that contrast with white Thassos stone; the circular dining table is edged by a band of turquoise enamelled metal by Solomon & Wu, contrasting with a band of polished macassar ebony, which in turn contrasts with a central element in white onyx; and the table’s shiny surfaces reflect the dizzying pattern of a chandelier made up of short ropes of glass. “It took us weeks to install the chandelier because every pendant has its own LED source,” says Thomas. “We had the same company, Lasvit, make the wall sconces.”

But all this is just preamble for the Dale Chihuly sculpture that hangs at the centre of the foyer staircase: three storeys of blue-green blown glass that looks like a magnificent conglomerate of paramecia or a coral reef crustacean that you don’t want to step on barefoot. In fact, Chihuly calls the nearly 500 pieces that make up this giant work “icicles”.

“To be sure that the sculptures fit – they aren’t technically chandeliers because they are not lit from within – and to decide where to place the thin steel rods that keep it from swaying, we built a full-scale model of the staircase at Chihuly’s studio in Seattle, Washington,” says H2’s James Bermudez. Chihuly’s own glass engineers prepared the custom stabilisation each piece required for its unique installation. “We then numbered the pieces and shipped them to Istanbul. Just unpacking them took days.” It was well worth the effort: hanging the sculpture in the stairwell brings Chihuly’s work close enough to touch and transforms the drudgery of walking up stairs into a truly memorable experience.

GO’s seven guest cabins feature king sized beds and décor in tones that vary from suite to suite. Thanks to a door at the end of the long and wide hallway the final two cabins can be used as a larger suite with separate day and night spaces. The en suite guest baths all have heated floors in turquoise Amazonite and white Thassos stone and all of the guest showers are backed with eye-catching splash walls by Italian artist Alex Turco.

The owner’s suite on the upper deck has some notable glasswork in the shape of huge curved glass windows that are punctuated by thin mullions covered in bevelled mirrors. “I have to credit Turquoise for the fabulous view in this suite,” says Horsfield. “At first, our design was busy, with too many mullions. I wanted the view but didn’t think that curved glass this large could be manufactured.” “These are among the largest pieces of laminated, chemically hardened curved glass that have ever been mounted on a yacht,” Karabeyoglu points out. “Just five panes to make this whole sweep, the same arrangement on the bridge. And all of this is made in Turkey.”

The centrally placed bed and oval console table behind it both feature stitched leather detailing designed to recall rugby balls, one of the owner’s favourite sports. The view from the suite over the owner’s private foredeck and beyond is fabulous – but still faces stiff competition on game nights from a large flat-screen TV concealed in a cabinet in front of the central window. Cheering for the owner’s team will be by far the loudest sound thanks to Turquoise’s engine installation: just 38 decibels were registered in the guest and owner’s cabins when the yacht was under way.

On top of a private study, large his and hers dressing rooms and separate en suites, the owners have a private foredeck complete with their own spa pool. This huge sweep of space feels like a ledge over the sea thanks to removable carbon fibre railings and a telescopic mast that disappears into the deck to leave the view totally unencumbered. More turquoise, this time mixed with golden mosaic tiles, lines the five metre long sundeck spa pool fed by a waterfall that cascades from a spout in the mast. “The owner wants to keep this as a party deck,” says Bermudez. “The onyx, teak and polished steel bars have TV screens by Aqualite Outdoor and all furniture is loose except for the lounging couch aft: its base hides the extra ceiling height we allotted to the gym on the bridge deck below so that people can really run on the treadmill.”

The yacht has a lift that runs from the sundeck all the way down to the tender garage, which has a 10.6 metre long hull door made by Dutch company Newthex. “We are not an assembly shipyard,” says Karabeyoglu. “We build our own hulls and are very hands-on in engineering and naval architecture, but there are some hings that other companies can do better and faster than we can. In the case of Newthex, we just have to tell them the opening size of the doors we want and they do the rest. We have a very good working relationship.”

Locating the tender garage amidships means that the yacht’s huge 162 square metre beach club is purely for enjoyment and doesn’t do double duty as a loading platform. “The beach club was a real selling point for the yacht,” says Horsfield. “The owner dedicated special attention to it.” And it shows. The club area is accessed from the aft deck and has a nine metre wide transom that opens flush to the floor and a seven metre wide side shell door; indoors and outdoors blend perfectly.

A storage area for watersports equipment and a fully stocked backlit bar in onyx and macassar mean that both the water bug and the barfly are well cared for. The aesthete will appreciate the art panel by Alex Turco, while the sports fan will be drawn to the 100 inch flat-screen TV opposite it. There was even space for massage and steam rooms. “This is not what you’d call a plain vanilla yacht,” says Karabeyoglu. “Not to build, nor to design. But we like complicated jobs because we like to show the world what we can do.” Whether or not you know the intricacies of this spectacular yacht, with looks as bold as the minds that produced her, GO certainly does the job.

GO’s owner suggested that H2 Yacht Design contact the renowned American glass sculptor Dale Chihuly for a statement piece for the yacht’s central staircase. Chihuly has been boldly and colourfully reinventing glass sculpture since the 1970s and his outdoor installations as well as his individual pieces have won wide acclaim. “The client first visited Chihuly in Seattle in early 2017, meeting Dale in person and touring the Chihuly Ballard Studio,” says Ruth Thomas of H2. “They have their current projects in build there and do full-scale mock-ups.”

After determining the basic design, next came the palette. The predominant colour was to be GO’s turquoise with shades of blue, white and clear glass. Chihuly blew “icicles” in these tones for approval. The piece was almost fully developed when the client made a second visit to see the mock-up of the stairs and get an understanding of the scale of the piece.The final result is Sea Spray Chandelier. At 5.5m high by 90cm wide, it weighs 435kg and incorporates 468 individually blown “icicles” hanging on a vertical spine spanning three decks. “Chihuly recommended the sculpture be lit externally for a dramatic wash of light over the entire piece,” continues Thomas. “We developed high-output LED lights and integrated mirrors into the design of the stairs so guests can see Sea Spray Chandelier from all angles.” GO does have a lift but using it would mean missing the show.

First published in the October 2018 edition of Boat International.