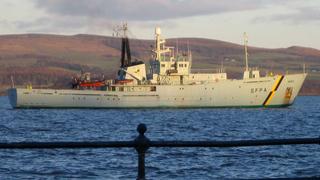 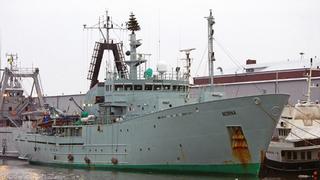 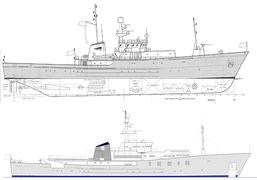 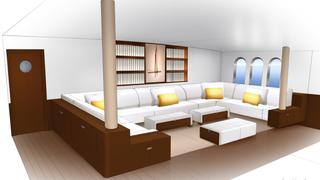 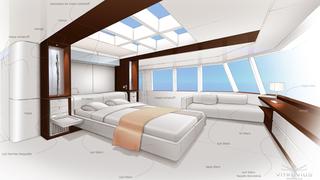 Norna was built – and built tough – in 1988. From then until she was decommissioned in 2010, the 71 metre Scottish Fisheries Protection Agency (SFPA) vessel patrolled the freezing waters of the North Atlantic for illegal fishing.

‘Early on in her career she sought to put a boarding party aboard a Fraserburgh fishing vessel with a notorious skipper,’ says Dr Richard Shelton, a research fellow for the Scottish Fisheries Museum. ‘Not wishing to be helpful, the skipper attempted to ram Norna and would have succeeded had her highly competent captain not taken immediate evasive action.’

The fact that a 71 metre ship was able to manoeuvre out of the way of a fishing boat is testament not only to the skill of her captain, but also to the solid handling of Norna herself. This capability is part of what attracted her current owner, who used the all-steel Norna as the basis for the luxurious but seaworthy explorer yacht Enigma XK – a project due for completion this summer.

‘She’s a wave breaker,’ says Captain Iltud Orio. ‘The aft part of the hull is fairly similar to a racing sailing ship, the middle part is like a cargo ship – she has a pretty fat belly – the bulwarks are very high and the bow is like a knife, really military style – pierces the wave.’

Perhaps just as importantly, the wiring, mechanics and hull were still in good shape, thanks to meticulous maintenance by SFPA officers. ‘That’s why it is a good idea to buy an ex-government ship – when you get these men on board they take very good care of it,’ says Orio.

He had a good boat, but the owner of Norna still needed a yard to transform her into a yacht. He settled on The Atlantic Refit Center (ARC) at La Rochelle, set up in 2007 by Stephane Marcelli and Chris Atkinson. La Rochelle is the sole deep-sea harbour on the Atlantic coast – the only one yachts can enter whatever the weather or tide.

‘I asked why he chose to come here rather than a big shipyard,’ says Marcelli. ‘He said he wanted to go to a French Shipyard, but not a very big organisation – he wanted a yard customised around his project. That’s what we offer. We are not a big company with big overheads and we build the project organisation to fit the project.’

ARC engaged McFarlane Ship Design for naval architecture. Philippe Briand would design the exterior and Veerle Battiau, director of his studio’s motor yacht division Vitruvius, would work on the exterior and interior. They saw the boat’s aesthetic potential.

‘Always we are attracted by a boat that looks like she is,’ says Briand. ‘This is a boat for real seas, she looks strong. The silhouette is good – if you start demolishing everything you rip up a build that is quite impressive. For example, to remove the funnels would be a shame, so we kept them and tried to use them as artefacts. Working this way adds complexity to the design. You need to consider the existing structure.’

Due to the condition of the vessel, much could be left alone. The lower deck crew quarters stayed intact, with the addition of extra shower rooms. The engine control room remains clad in pale blue Formica because it was functioning well and the owner liked its retro style. A sprinkler system was added to crew and guest quarters and the generators replaced (by cutting a breach in the hull) but the British Ruston engines were kept and overhauled. The vessel will remain Lloyd’s registered but with a new classification as a commercial yacht.

‘She’s a powerful ship,’ says Orio. ‘Two times 3,000 horsepower allows her to go 18 knots whatever the weather conditions. Full tanks capacity is 220 cubic metres, allowing her a range of 19,000 kilometres at low speed – a half-turn of the world.’

All the structural changes that were made had one aim – to introduce more light to the interior: enlarging portholes, adding skylights and creating an upper deck saloon – or ‘diamond’ as the designers call it – with wraparound windows. Forward of the upper saloon, the master cabin (formerly the captain and engineer’s living quarters) will now also be a light, bright space, with wraparound windows forward and a huge sub-divided skylight above the bed. Aft, the en suite will feature a bath, two sinks, hammam and open shower, while further back still will be an office.

To the rear of the upper saloon the funnels have been incorporated into the new design. A promenade on the bridge deck above will act as a roof that joins them into one shaded seating area, open aft, leading to a spa pool, then the long sweep of the extended aft deck and helicopter pad. The look is both industrial and luxurious.

Below, on the main deck aft, two big davits will be replaced with cranes to launch the two tenders, and the space will also accommodate two 4×4 vehicles. The decking here, as elsewhere is Bolidt Future Teak, a resin imitation teak used for environmental reasons – as is the low-consumption LED lighting used throughout the boat.

The interior of the main deck, where guest accommodation and the dining saloon are located, was arguably the most challenging aspect of converting this fisheries vessel into a luxury yacht. The central stairs could not be changed because, ‘they are almost the spine of the boat,’ says Battiau. The dining saloon did not need alteration, but the spaces of some other guest cabins and the gym/spa needed to be redesigned. To do so they had to work around load-bearing pillars – and add some in the dining saloon to carry the weight of the ‘diamond’ above.

Another difficult proposition was adding air-conditioning – not necessary in Norna’s past in the North Atlantic, but vital in Enigma XK’s future. ‘Where does [the air-conditioning] go?’ asks Marcelli. ‘This vessel was built with slightly smaller spaces between the decks. Usually you have at least three metres between the two steel decks; here you have only two metres 50 centimetres.’ The solution? ‘We squeezed the space. Spaces over the deckhead are full. Where usually you have one big pipe, we have split it into two or four small pipes.’

This tightness on headroom also meant that Battiau had to play tricks with her interior design scheme. ‘The built-in furniture is a bit lower than usual. If I put it 10 centimetres further up, all the proportions are off.’

The interior challenges didn’t end there: as is common on working vessels, Norna has a camber. She slopes both lengthways (upwards to the bow) and across (down from the centreline both starboard and port). ‘There can be a height difference of 20 centimetres between the centreline and the edge of a cabin,’ says Battiau. The solution here also lay in the interior décor. ‘Because of the shape of the floors I opted for a marine look with a slight modern touch, so it would not look too heavy,’ says Veerle.

In other words, a slight slope is not such an issue if you pick a style with character, rather than a modern look that relies on exactitude. In this way, each cabin will be subtly themed for a particular continent. The main deck palette comprises wine tones, bright berries, fiery oranges and browns. Modern elements such as white leather, mirrors and up-to-date en suites lighten the look. ‘When we’re closer to the light I’ve gone a bit more modern,’ says Battiau of the taupes and moss greens in the upper saloon. ‘I brought in African woods here too.’

When completed, Enigma XK will undertake an extraordinary journey: through the Northwest Passage, to Cape Horn, across the Atlantic to the Caribbean, on to Patagonia, circling Antarctica, to New Zealand, Vanuatu, the Solomon Islands, Papua New Guinea, Southeast Asia, Japan and Canada. Because the owner won’t have time to stay on board for the whole trip, charterers will be able to join her for portions of the journey.

‘I was here with the chief engineer right at the beginning of the project,’ says Orio. ‘That was the wish of the owner, that we should know every pipe; he wanted to be sure that if we go all around the world we will be able to take care of her whatever happens.’

And just as she did in her previous life in the North Atlantic, Enigma XK will take care of them.