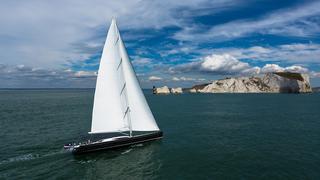 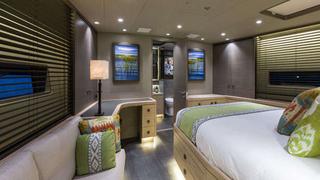 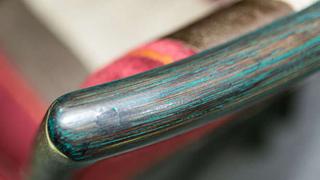 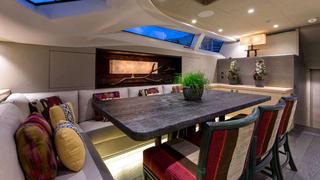 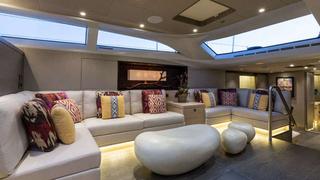 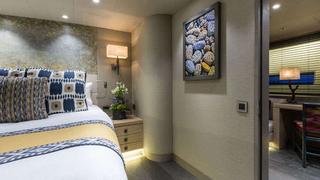 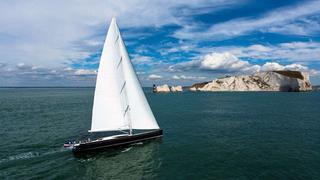 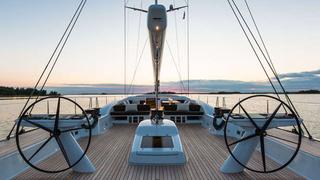 Combining art with design is something that doesn’t come naturally to everyone. For UK-based designer Adam Lay, it is a central part of his creative philosophy. For a clear example of this philosophy in action, look no further than Inukshuk, the 32.64m Baltic 107 that emerged from Baltic Yachts’ yard this summer.

With hull lines and exterior styling from renowned designer Germán Frers, it came down to Lay to produce an interior. But this was no ordinary brief, and right from the start it was obviously going to be a special but challenging project. ‘I signed the contract in August 2011,’ Lay says, ‘on the basis of an introduction and an assessment via phone and my mission statement.’ That mission statement was clear: essentially emphasising that Lay has no house style, and no two of his interiors are the same. It wasn’t until early 2012, however, that Lay met the owner and the discussion of Inukshuk‘s theme began.

‘The pressure was on,’ says Lay. ‘I’d already been signed up, and had to get it right. I turned up with nothing more than a bag of samples which I laid out on the table. The client disappeared and came back with an armful of magazines, at which point I thought I’d lost it. He flicked through the magazines, said he didn’t like anything he saw, and turned his attention to the samples on the table: timbers, bleached and limed; rustic stone with rough surfaces – not your usual pristine stuff but something more natural, less shiny-shiny. Then he went way beyond and showed photos of his houses and an outstanding natural landscape that is very close to his heart.’ It was the stark beauty of this location that would form the basis for the design language on Inukshuk. ‘He sent an email afterwards saying the brief was nature, with no glamour, although interpreted as kicked back high-end as it is a superyacht, of course!’

The first phase was to develop the background finishes: brushed, limed oak, with brushed silver-painted oak for the bulkheads and a slightly darker variant for the floor incorporating a varnish that looked like a wax finish. Baltic’s joinery department took up the challenge and produced samples. ‘They did it,’ enthuses Lay, ‘and it’s a massive string to their bow.’ At the same time, Lay was looking at fabrics, spending time at Chelsea Harbour’s design centre looking for bulkhead fabrics to blend in with the timber. He found promising samples from textile make Lelievre, which used Trevira fabric, so it was naturally fire retardant.

‘The owner wanted bright fabrics to offset the neutral backdrop,’ Lay says, ‘and his brief was for an interior that could be easily undressed for resale but that would give an eclectic feel with special Ottomans, a custom dining table, artwork and some Inouit cues that were subtle but which would always be a part of it.’ When it came to the special pieces such as the dining table, Lay turned to local UK company Parkway Interiors.

The dining table took inspiration from a tree trunk painting, and creates a clever illusion where a series of narrow trunks appear to penetrate the table top and support it. Of course, the design was more involved, due to the table’s location. ‘The table had to be strong so it could be used as a handhold while sailing, or to withstand the impact of someone falling against it,’ says Lay. The answer was to create the log-effect legs out of foam wrapped in glass fibre with a strong aluminium frame core. ‘The trunks themselves are false,’ Lay explains, ‘but the sections where the legs “penetrate” the table top are solid timber.’ Each trunk lines up perfectly with the timber cross-section laid into the table top, and the whole piece was stained quite dark, as Lay describes, ‘to look like it’s been pulled from the bottom of a lake’.

On the opposite side of the main saloon, three large granite boulders appear to defy the weight limits characterising most sailyacht builds, offering a comfortable rest for trays of drinks or somewhere to put your feet up. Once again, the illusion is fine, and once again it was Lay’s own artistic talents that led to their creation.

‘I couldn’t see how standard coffee tables would fit in that environment,’ says Lay. ‘I suggested boulders. I didn’t want them too Disney, too whimsical or to look like a design item that was more perfect than the real thing. The solution was simple: I went to Parkway Interiors, and they gave me a sharp knife and an electric sander. I spent a morning shaping them out of high density foam, and didn’t know when I started what they were going to look like. I whittled away until they were right. I used to do a lot of work in clay at school so it obviously paid off!’ Parkway fared the pieces, GRPed them and finished with spray paints to make them look like granite. The effect is startling, and highly realistic.

Such innovation and attention to detail is evident in other pieces throughout the interior. Hannah Woodhouse was brought in to do the lights and, eventually, the distinctive bedheads in the cabins. ‘I met her through Turnstyle Designs which supplied the custom interior hardware,’ says Lay, ‘and everything she does is bespoke in terms of patina. We were pernickety precise about making sure all the colours tied in. It was quite challenging but she developed special pieces like the Inukshuk lamps in the saloon, the niche lamps and others. They have switches in a matching style which are separate from the cast bronze and cast aluminium table lamps themselves, as she felt otherwise a switch on the fitting would ruin the form.’

For the bedheads in the guest cabins, the owner’s brief was for them to become pieces of art in themselves. ‘He said early on he wanted lichen growing on them to give a natural feel,’ says Lay. At first, the team tried trompe l’oeil pieces, but it became clear Woodhouse would be able to create something far more interesting. After researching the lichen colours of the area that was providing inspiration – bright green, orange, yellow and ochre – Lay researched native plant species and Woodhouse then used the fruits and berries to create pigments that were used to add the colours – one for each cabin, with fabrics to match. The result is not only beautiful and subtle, but also adds a spiritual and a physical connection to the owner’s favourite place.

It is perhaps indicative of the nature of the project as a whole, and the faith and trust the owner put in Lay, that he didn’t see the finished bedheads until the first time he stepped on board when the yacht was nearly finished.

When the owner arrived at the yard in July 2013, it was the first time he had seen the yacht finished. ‘We went sailing,’ says Lay. ‘We put the kite up and had a nice sail; then we watched a squall roll up the coast, which hit the yard where they’d erected the marquees and blew them all away. We hit the end of the squall as we came back in, charging at full chat with two reefs – the owner was very happy, and was blown away with the boat as a whole.’

Carbon construction usually implies an element of weight consciousness, and much of the furniture and fittings are lightweight, with foam cores used throughout. However,_ Inukshuk_ has been designed as a safe family cruiser – evident in deck details such as the lack of a mainsheet track – rather than an out-and-out racer, which did give flexibility in the design and construction.

The result, then, is a superb cruising yacht with outstanding sailing capability, combined with an esoteric and personal interior that inspires whether you know the derivation of the design or not. She creates a unique experience, a perfect example of the art of boatbuilding and the art of design.

This is an abbreviated version of an article that appears in the December 2013 issue of Boat International magazine.