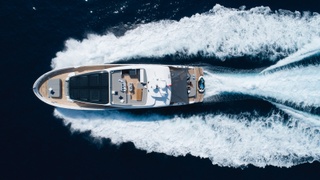 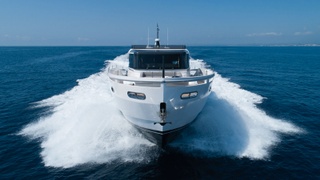 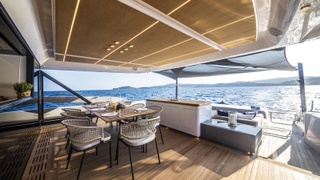 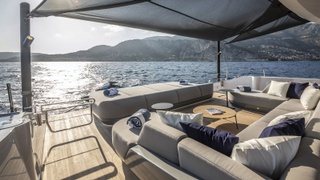 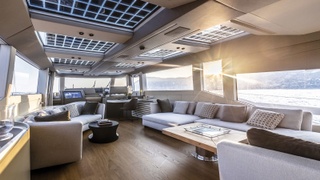 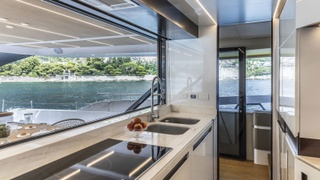 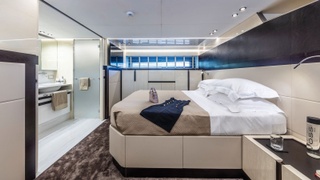 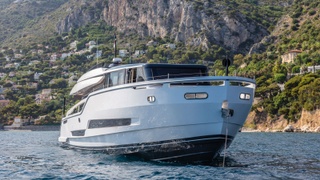 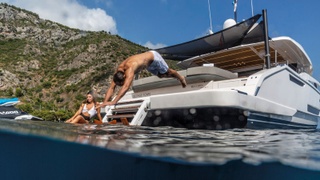 With the yacht slipping through the opening pontoon that closes off the mouth of Cannes’ Vieux Port, you could almost reach out and high-five the crowds jostling on either side. Perched up on the flybridge of the new 26-metre from Extra Yachts, we have a bird’s-eye view of the Yachting Festival below. It takes a steady nerve and quick reactions on the Volvo IPS joystick by the skipper to squeeze through the narrows in the midst of a procession of yachts heading out into the bay for sea trials.

Carefully designed with a hull that sneaks in just below the 24-metre mark for CE certification, the Extra 86 Fast is nevertheless big for a small yacht. Including the bathing platform and her trademark protruding anchor, the hull actually measures 26.3 metres, but only 23 metres of that are on the waterline. There are lots of other superlatives about her too. Under the long aft deck, three of the biggest Volvo IPS engines available – the 1350 – combine to push her up to a reported 31 knots (although we topped out at 26 knots). And back there somewhere, the largest Seakeeper gyrostabiliser on the market spins away at speeds of more than 5,000rpm.

Perhaps in view of Extra’s origins, none of this should be a surprise. The brand was set up just two years ago by ISA Yachts, itself freshly acquired by Palumbo – a growing family-owned shipyard empire that runs from Rijeka, Croatia, to Malta, and from Tenerife to Ancona. Palumbo has a background in building and refitting heavy commercial ships, and there is something muscular and steely about its broadening range of yachts.

I don’t mean steely in the literal sense. All of Extra’s boats up to 28 metres LOA are built in lightweight glass fibre, with the larger Extra 120 and Extra 130 in aluminium. No, by steely I mean that the build quality and technical platform is reassuringly robust, as it would be for a commercial vessel. “We only use rigid piping, for less maintenance,” says Diego Marinelli, general manager of the Ancona yard, as he shows me around the engine room. “The fuel pipes are all in stainless steel; we just can’t bring ourselves to build with plastic pipes.”

Similarly, the yacht has a very sophisticated water treatment system and built-in redundancy for all key systems, from fire pumps and grey water to air conditioning. What’s more, every system can be switched on and off directly at the switchboard in the engine room in case the digital control system fails. “The main switchboard is more like that on a 50-metre vessel,” adds Marinelli. “On a normal ship this would just be a white panel.”

Describing the Extra 86 Fast as a robust technical platform is true but misses the real point of the boat. Designer Francesco Guida has been brought in to give the whole Extra range a very distinct personality. Where many of ISA’s previous yachts (designed by Enrico Gobbi and Vallicelli Design before that) had classic lines, Extra represents a radical departure. The boats have a high spoon bow and a superstructure whose mass is concentrated forward. Underwater, the slow turn of the bow continues in a line that ISA likens to the belly of a killer whale.

“The alternation of white curved surfaces, which extend horizontally, with dark glass horizontal stripes give the ‘family feeling’,” explains Guida. “Also, the long cockpit of the 86 Fast is inspired by the famous ISA 120. It has the same length in proportion to the LOA and the same arrangement distribution.”

The Extra 86 also offers a lot of interior volume, with a big, comfy forward saloon that narrows towards the helm station at the front. The control console is covered in cream leather and features a gigantic touchscreen, giving instant oversight of every onboard system. Two more modest glass bridge displays at the wheel give navigation readouts.

There are two roomy seating areas here, featuring sofas and coffee tables by Italian designer brands including Minotti and Tribù. The furniture is low to the ground and spacious, inviting guests to stay in touch with the driver. “The owner usually likes to drive,” confirms marketing director Virginia de Carlo. It complements the low sills to the wraparound windows and the glass roof to give the impression that you are almost inside a crystal ball. The window panes are extremely wide, giving uninterrupted views, while the solar cells in the roof throw an attractive dappled light on the space below.

A well-equipped galley that straddles the back of the superstructure looks out on to an al fresco eight-person dining area on the aft deck. A large window offers protection in cold weather, but press a button and the whole thing lowers out of sight to create an open, convivial atmosphere connecting the chef and the guests. Though there is accommodation for four crew in that roomy bow, the set-up is clearly designed for owners who also like to cook themselves.

The flybridge above and the lines of the superstructure mean that the dining area is covered, but Extra has used the engineering smarts of its parent company ISA to do away with supports. There is just a pair of swept-back glass walls with a structural frame that buttresses the deck above. Otherwise, there is nothing to interfere with the view and the flow of cooling air across this deck. “It was not an easy thing to do,” confirms Carbone. “The designer always wants to keep the style lighter than the engineers suggest. It was a compromise between them, as always. The engineers did a good job.”

Only a flexible bar unit divides the dining and the lounging areas aft. A large U-shaped sofa faces backwards, giving the sense of a large balcony on the sea. The bulwarks here are low, so there’s nothing to interrupt your view, just a huge sunpad cantilevered off the transom above the beach club. Here, a Transformer platform with built-in steps makes it easy to launch and recover toys, or simply give bathers access to the water. It does, of course, double as stairs on to the quay, although there is a dedicated hydraulic passerelle for this purpose that retracts into the starboard quarter.

Extra Yachts was determined that there should be a dedicated tender garage to get the ship’s boat out of sight. This leaves space for another toy, such as a jet ski, on the stern and reduces wear and tear on the beach club itself. Again, another neat engineering solution made this possible. The sunpad tilts right up to reveal the bay for a 3.2-metre jet tender, complete with a compact hydraulic crane to launch and recover up to 400kg. There’s even room in this locker for a few other toys, such as a Seabob.

The crowning glory of the Extra 86 is the 24-square-metre flybridge deck. It offers two driving seats, as well as acres of sunpads and comfy seating around a teak table. The bar in one corner can be equipped however you’d like, so this could become a barbecue station with an unbeatable view, or the place you mix sundowners for guests. There’s also a generous sunpad ahead of the steering console.

The standard configuration leaves this space open to the elements, so there is a watertight hatch that seals off the steep interior stairs. However, the 86 Extra has built-in sockets for carbon-fibre awning poles, just as it has on the aft deck and at the foredeck’s sunpad. “They are certified for full speed, so you don’t have to remove them,” says Carbone. “We also have the version with a structural T-top, but it hasn’t been built yet.”

So far, the Extra has impressed me with the range of relaxing and entertaining space on board. Its private spaces on the lower deck offer similar volumes, albeit without the flood of natural light. Down a flight of cleverly lit stairs, the cabins unfold over several different half-levels, which helps to increase privacy. The owner’s cabin spans the full beam, giving you a narrow hull light on each side. Its bed is huge – there is plenty of room here for imperial-sized sleeping apparatus. And the design team has increased the sense of space by making the basins and mirrors of the en suite area open plan. The shower and heads are still enclosed, and if you want some privacy in front of the mirror there are sliding doors, the mechanism of which is hugely satisfying: pull one and the other closes at the same rate.

Storage is abundant, thanks to lots of built-in cabinetry. The gloss finish is naturally high quality, but because of the low windows this space has to work hard to stay bright – no doubt one reason why the owner of hull No. 1 has specified pale cream Mastrotto leather headboards and light-coloured fabrics and moquette. The theme is consistent across the two twin cabins and the forward VIP, where the large double bed is set at an angle off the hull.

Despite the volume below, it is the exterior spaces and the way they connect owners with their family or guests that really defines this yacht. When the time comes to turn her around and head back to Cannes, it seems like the most natural thing in the world is to head up to the flybridge to enjoy the last rays of sun and the warm breeze. All that’s missing is a cocktail.

Solar panels are a design feature of the whole Extra line – even the flagship 130 Alloy offers the option of solar panels in the glazed roof of the upper saloon. For the 86 and 86 Fast, that means an area of 20 square metres devoted to high-efficiency Ertex solar cells laminated into the glazing. These can pump out 6kW of power in the heat of a Mediterranean summer’s day, which is stored in a 14.4kWh bank of gel-type batteries. “It powers all the sockets and lights,” says Diego Marinelli, general manager of the Ancona yard, “but not the air-con, galley or stabilisers. We’re looking at 24V air-con and stabilisation for the future.” It’s all very hush-hush at the moment, but this would be a real USP if Extra can pull it off, allowing future boats to remain silently at anchor for even longer.