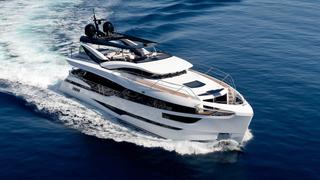 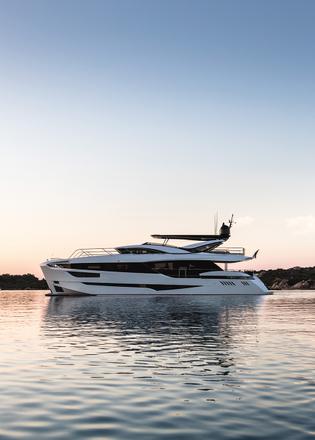 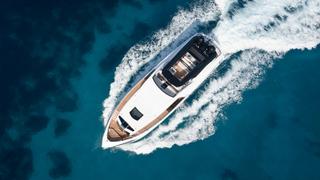 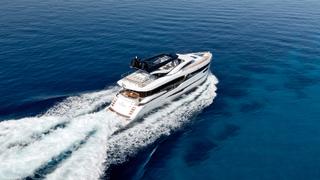 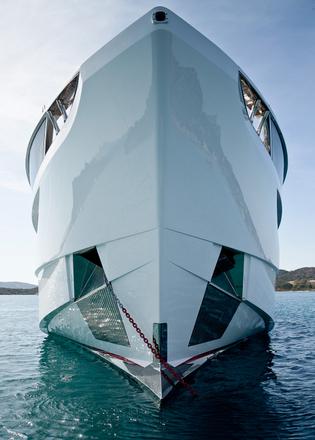 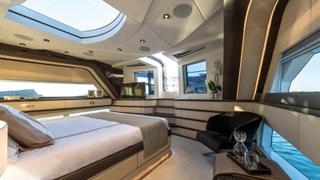 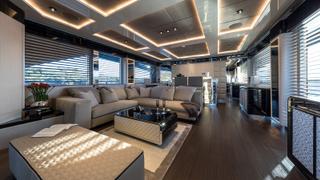 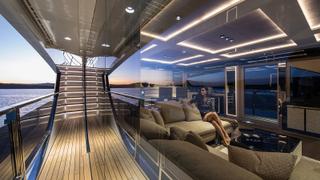 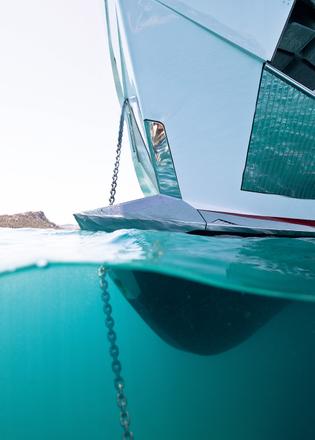 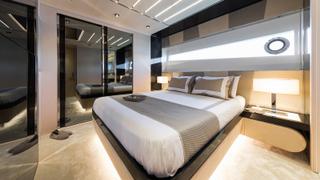 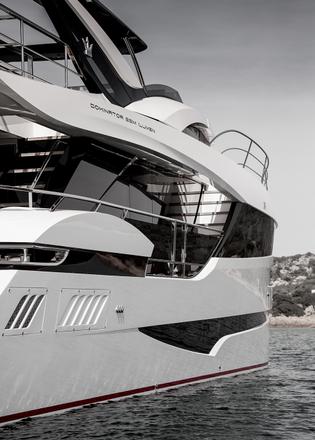 A man flipping through a magazine stops on an arresting image, a 3D rendering of a boat model called Ilumen. He had had a yacht many years before, a Broward that he sold because he was too busy to use it, but this image captivates him. He reads the short article alongside it and decides to speak to his wife about the yacht. In spite of her resistance — they’re very busy, travel a lot and she is a little susceptible to travel sickness — he decides to investigate further.

Fast forward a year to a hot June day in Monaco. The sun is still high in the sky when an acrobat wrapped in silk ribbons starts dancing inside a clear ball outside the famous yacht club. Music soars, sparks shoot out of canisters and the aerial dancer extends her arm towards a dark curtain over a large structure. As a crane pulls it up, the incarnation of that magazine image appears — a yacht named Kalliente.

The owners, Terry Giles and his wife Kalli O’Malley, share their story a few hours later during a celebratory dinner that Dominator has organised to showcase the first Ilumen it has launched since announcing the model to the world in 2014. Getting to this stage involved a bit of “marital manipulation”, Kalli says, a smile on her lips. Undeterred by his wife’s initial rebuff, Terry had a model of the boat built, complete with the name Kalliente, and gave it to her on their anniversary.

The intriguing name makes perfect sense once you know more about this couple. They reside in Houston, own a luxury hotel in Spain (in addition to Château Eza on the Côte d’Azur, which was voted one of the world’s most romantic hotels by Fathom travel website in 2013) and share a fondness for Mexico and spicy food. “Caliente [meaning hot in Spanish] is a word we use often,” Terry says. “I like to say I named [the boat] after my hot wife!”

“What I loved about the design of Ilumen was the front owner’s cabin on the main deck, which is very private and well done with a roof that opens to the stars,” he continues. “The design is interesting and, of course, the amount of glass they have in the hull that allows you to feel like you have floor-to-ceiling windows inside is, I think, very special.”

Light flows freely from those windows and a skylight above the master cabin’s bed. The bedroom is connected via a sliding hatch to a private terrace large enough for a couple of chairs and a small table, one of several signature features on board Kalliente.

The Ilumen design is just shy of 28 metres, including the swim platform, but Kalliente has four guest cabins, in addition to that special owner’s suite. The size of the superyacht sundeck is also remarkable. It covers two-thirds of the boat’s total length, spans the full beam and is divided into three distinct areas: the exterior helm, with companion seating; a large central area with comfortable banquettes flanking a large table; and a big spa pool area with sunpads. The carbon hardtop is but a thin frame supporting a large bimini that opens nearly the entire deck to the sky.

These sorts of features, that make Kalliente a contender as a charter yacht, were interesting to Giles. They also include a tender garage containing a Williams jet tender, a swim platform fitted with an Opacmare Transformer passerelle that can be raised and used as a diving board or lowered below the water level to launch water toys and tenders, and space for good crew accommodation. “I wanted something smaller to get into some of the very special ports in the French and Italian Riviera,” he says. “But I wanted the volume and some of the special features of a much larger boat.”

That is exactly what designer Alberto Mancini and Dominator intended to offer when they developed the Ilumen. “It is what the market requires now,” Mancini says, “a boat with height, light and a (waterline) length under 24 metres.” And superyacht quality.

Giles enlisted the help of bluewater broker Jim Acher, whom he knows well, to research the concept and eventually buy the boat. “One of the things that I advised him to do from the get-go is to have a vessel that is fully coded. It is always good to have that option,” says Acher.

Kalliente was built to fully comply with the MCA’s charter code (an option that is available to all Ilumen owners). ACP Surveyors acted as build supervisors to help ensure the best possible outcome, but the process was relatively simple. With shipyard owners who come from an industrial background, and craftsmen working in Fano, in the Marche region of Italy, Dominator combines solid engineering with flair, Acher says. The builder estimates that 10,000 hours went into the engineering phase alone.

Superyacht thinking is evident on many levels. Kalliente boasts an integrated audiovisual system from Videoworks, an Italian company that works with superyacht builders such as CRN. There are 30 invisible speakers on the lower deck alone that transmit clear sound through panelling. All the AV entertainment systems, including TVs concealed behind mirrors and blinds, are controlled via tablets.

The big yacht thinking is also evident in the level of customisation that Dominator makes available to its clients. “It really surprised me how bespoke the Dominator is. It is tailored — genuinely so,” Acher says. “Every step of the way, they want to exceed expectations.” Choices extend not only to the interior design and layout, as is usual, but to the propulsion plant and hull type as well.

Whereas Kalliente is a semi-displacement yacht with moderate speed (top speed will range between 18 and 21 knots), the Ilumen can be built with a semi-planing hull for a top speed of around 29 knots. The hulls, which were tank tested in the hydrodynamics laboratory of the University of Trieste, share the same blade-shaped bulbous bow entry but have a different design in their aft section, naval architect Andrea Agrusta says.

Agrusta, whose firm NavalHEAD now works almost exclusively with Dominator, collaborated with German gear specialist Reintjes to optimise the hull for its Fortjes propulsion system. It may be new to the yachting industry but Reintjes has been using these types of pod units on commercial vessels for years.

One advantage of the Fortjes system is the additional space it affords in the engine room, which allows Kalliente to have a control room, and better efficiency. Still, as many owners feel more comfortable with standard dual shafts, Agrusta has also created another version of his hull for them, and that will be the set-up on the next Ilumen to launch.

Each interior will be different, which is a given, but some of them vastly so, including the number of cabins for guests and crew. The five-cabin layout suited the Gileses well. Mancini, who did the interior design of the Ilumen, also created Kalliente’s bespoke interior décor. “I designed the interior following the owners’ criteria. I spent a lot of time in Houston in their beautiful villa, employing the same approach I do for a megayacht custom interior,” says Mancini, who describes the style as “modern, with a touch of warm minimalism”.

The designer adds that “glossy surfaces such as the smoked glass from deck to ceiling and glossy ebony furniture give a touch of richness to the whole interior design mood. The soft elegant and sophisticated fabrics, leathers and backlit onyx are doing the rest to create the ‘calm’ feeling of refined elegance.

“I was looking for an exquisite balance between the natural light, the artificial LED indirect lighting system — both are always a priority in any interior design project of my studio — and the soft welcoming atmosphere from the selection of materials in shades of taupe, beige and brown.”

Included in the luxurious ensemble are a sofa and chairs by Minotti, ivory nubuck by Foglizzo and lights from Altraluce. The focal point of the elegant saloon, which is finished in contrasting high-gloss ebony and bleached pearl oak, may be the champagne bar, with a sliding top made of backlit onyx. The coffee table, designed by Mancini and built by Italian company Luxury Wood, includes a built-in champagne bucket, as does the dining table on the sundeck.

The detailed décor and vast expanses of glass leave little room for accessories or artwork, but the owners still found special pieces during shopping expeditions, including one to the artist-rich village of St Paul de Vence, a short distance from Èze. “They’ve got some great art shops. If you haven’t been to St Paul de Vence it’s a great place to go,” Giles says.

While the interior design will vary, a constant between the Ilumens will be the striking exterior styling. The combination of ceiling height on all decks, no less than 2.15 metres anywhere, vast stretches of glass, attractive curves contrasting with sharp cuts in the bulwarks and the knife-like shapes of some windows, the black frame supporting the sunshade and sat domes — it all contributes to the yacht’s original appearance.

One of many signature elements is the design of the superyacht wheelhouse. A lip above a reverse windshield — a bit like the peak of a baseball cap topping the front of the superstructure — is the only visible clue from outside that the wheelhouse is there at all. Access, which is far more commodious than it appears from the outside, is via a gullwing door that opens like that of a Mercedes 300SL.

“The reverse windshield has two functions: it gives better ergonomy to the wheelhouse and balances the proportions, adding a touch of dynamism, strength and [a] powerful feel to the front perspective of the yacht,” Mancini says.

More of that powerful appearance stems from the stark contrast of black and white paint, which the designer says is “a must”. “It is very easy today to design a yacht and paint it with metallic grey or other colours… but it’s much more difficult to keep the purity of just the black and white effect.” To temper the appearance of volume, Mancini gave hull windows the shape of knives. He also gave a nod to car design by covering the engine air intakes with gill-like grilles commonly found on classic cars.

Kalliente’s captain, Scott Pearce, joined the boat long after the navigation equipment was ordered but is happy with the set-up. “With all Raymarine touchscreen chart plotters, it is extremely user friendly and a joy to work with,” he says. The equipment is comprehensive, including both bow and stern thrusters, a Seakeeper 35 gyrostabiliser and a Humphree Ride Control system for stability.

Since the launch party in Monaco, Kalliente has been cruising into the special coves around the Riviera, just as her owners pictured. “We are cruising the South of France at the moment with a very happy owner on board,” says Pearce. “It is great to be at sea again and Kalliente is performing wonderfully.” And to think it all started with a small image in a magazine.

First published in the September 2017 edition of Boat International