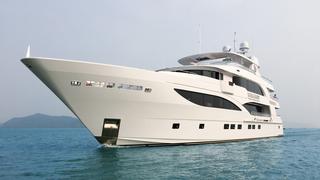 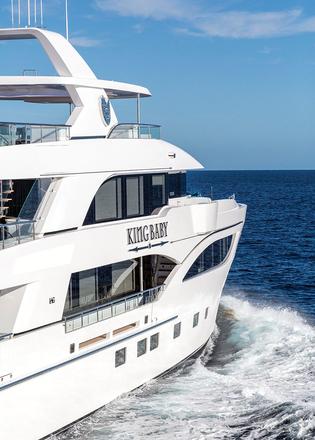 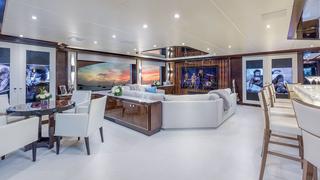 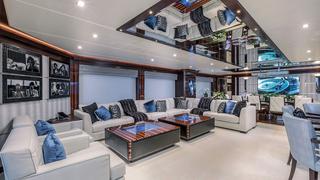 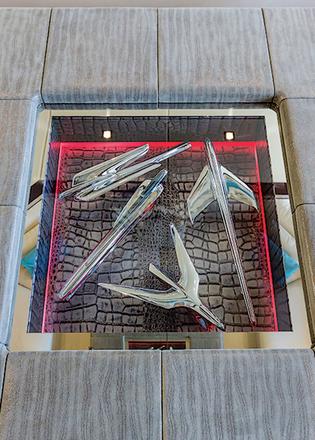 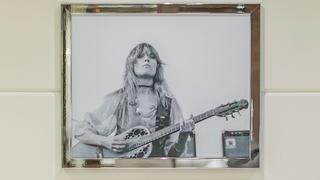 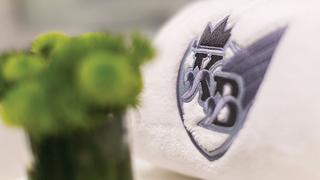 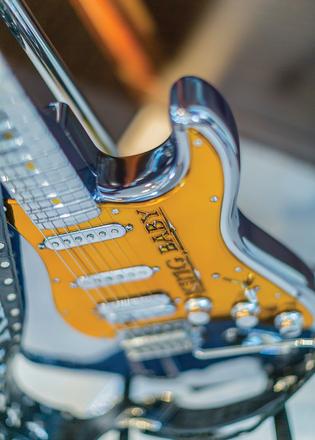 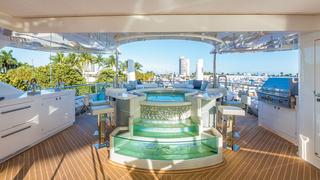 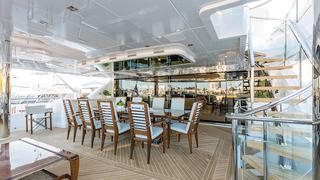 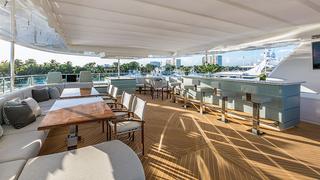 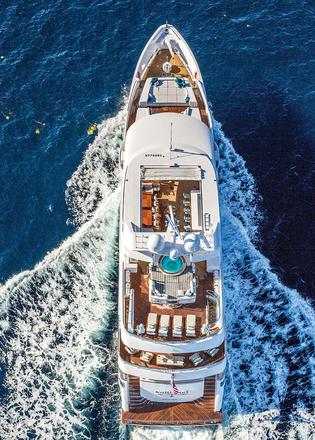 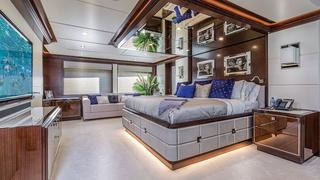 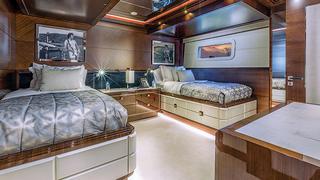 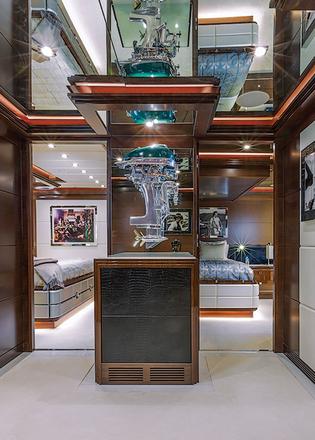 Bold and slightly provocative, the made-in-America King Baby jewellery and style of Mitchell Binder served as inspiration for this Chinese-built, U.S.-flagged new King Baby. Her owners took a big step with their 42.67 metre built at IAG Yachts in Zhuhai. She is beamy and tall, and at 497 gross tons is the largest composite motor yacht delivered in China to date.

King Baby is also the manifestation of owners unwilling to settle and a builder and project manager determined to meet their high expectations. Toward the end of the build IAG, a relative newcomer to the world of yacht building (the yard launched its first big boat in 2010), had new owners. Sunbird, a conglomerate with five shipyards, including a large commercial facility, added IAG to its varied portfolio. Sunbird was not in the picture during most of the construction of the IAG flagship but for the yacht to make a great impression at the Fort Lauderdale International Boat Show was a nice step in the right direction. Sunbird’s goals include developing the U.S. market with a full-range of quality yachts, in composite and metal.

King Baby is also the embodiment of a friendship many years in the making. The yacht’s owners (not musicians or jewellery makers) did not want to be the story, preferring to let friend and King Baby founder Binder do the talking. Binder has created unusual pieces for the greatest names in the rock ’n’ roll and movie worlds — from Elizabeth Taylor to Taylor Swift, as he says.

The edgy jewellery he made for bikers under the name King Baby began to attract, in his words, “wannabe musicians” who became big — think Aerosmith — and others who liked the look and feel of these pieces crafted in America.

The yacht owner “was a customer who got my number somehow; he called me out of the blue and introduced himself,” says Binder. “At the time, he was building a Cigarette boat. He loves my jewellery, he’s a big fan, loves the name and asked my permission to use it. We hit it off. This was eighteen years ago.” After the Cigarette came a 20.72 metre Sunseeker, a 30.78 metre Hargrave and now this new opus to King Baby and its rebel spirit.

During the creation of this new boat, Binder introduced the owners to one of his friends, Rocco Laudizio, founder of Chicago-based Slick Design, a firm that designs interiors for hotels, restaurants and nightclubs. Laudizio got involved roughly a year-and-a-half into the project, working with King Baby studio on the rock iconography. “The owners wanted something unique that really captured a bit of who they are,” he says. “We spent months curating the classic rock photography collection.” The images are presented in custom-designed frames illuminated with LED light panels.

Stepping into the saloon, the first impression is a “wow” that has a lot to do with the space and height that a mirror on the ceiling amplifies. And then, it’s the vintage rock photos, framed in black alligator leather, and what looks like a photograph of a turntable behind the dining room table that steal the show. It’s really a glass etching. “I was blown away by the technique and the time. It’s kind of realism but it’s an art piece,” says Binder.

Show-stopping rock iconography is found throughout King Baby. “It’s funny because these are my clients,” says Binder. In the skylounge, a younger Keith Richards is sprawled across two doors that open onto one of six electronic racks that support the yacht’s top-notch entertainment system.

It was designed and installed by Palladium Technologies, which also provided the latest in monitoring, entertainment and lighting technology and the IT backbone to support it all. With an 84-inch-wide 4K-capable TV screen (one of 24 on board), mega sound system and deep Brentano couch, King Baby’s skylounge is a great substitute for a concert venue, offering what Kevin Bubier, head of project management at Palladium, calls “the audiophile’s ultimate experience.”

The glass-top coffee table in front of the sofa is part display case, part conversation piece and all-around very special. Inside are odd-shaped, yet familiar items. “There are all vintage hood ornaments, which we sanded down and refinished in our shop in Santa Monica,” says Binder, whose studio also created the custom accessories, carved in leather found throughout. The authentic Fender Stratocaster guitar dipped in chrome against the wall is a contribution from Slick Design.

“There are only two guitars in the world made like that. Those are real working guitars; they were taken apart, chrome-plated and they work,” says Laudizio. A guitar and amplifier presented in another glass table in the main salon received a similar treatment. Why chrome? “I am a chrome freak and [the owners] loved it, and it goes with rock ’n’ roll.”

"Luxury with a rebel spirit" is what King Baby is all about. Nancy Wilson is just one of the famous faces on board. Pictures courtesy of Thierry Dehove and Jim Raycroft.

The rock décor is a collaborative effort between yacht designer Evan K. Marshall, King Baby and Slick Design, but the overall design is Evan K. Marshall. Initially, the yard turned to Marshall to add his touch to the boat’s exterior styling. Then, the owners reached out to him on a few important points regarding the general arrangements and eventually awarded him the entire interior design package and key features outdoors.

“I liked the whole idea, the rock ’n’ roll iconography as well,” says Marshall, who worked on creating a modern backdrop that uses high-gloss dark walnut, light-hued Majilite, walnut and onyx floors and wool carpets. Mirrors, stainless steel and shagreen accents, marine leather on most doors and Cantalupi lighting play off the rock theme and take full advantage of the more than seven feet in height.

A shining point of King Baby is the elaborate pattern in the teak decks that Marshall designed. He also created a three-tier waterfall cascading from a custom-built Jacuzzi clad in mosaics and surrounded by a stylish bar. “It was one of the most fun projects I worked on,” says Marshall, who, with everyone else behind the scenes, recognises the owners’ important contributions. Very involved, the owners never took no for an answer. “Every detail was analysed, thought about, and that kept us on our toes.”

Making it happen at the yard was the responsibility of Tim Kings, the experienced project manager who has overseen many builds from American to Asian yards, and the yacht’s captain, Bryan Carter. Specialists, including plumbing and electrical contractors, complemented the team.

Kings, who lived on site three months at a time for the better part of three years, was in the eye of the storm a few days before the yacht’s boat show debut in Fort Lauderdale, when I caught up with the vessel. He was managing a long list of priorities, occasionally breaking into Chinese to address his crew. IAG had dispatched a staff of 11 people to Fort Lauderdale for final commissioning. Several were busy sanding the eye-catching teak decks, which were built in-house. “The teak is from trees bigger than I can put my arms around,” says Kings.

He points out the yacht’s logo, designed into the decking, and a drain cover in sparkling stainless, which he and a colleague created around the symbol of Yin and Yang. They also sketched the design for the synthetic teak decking chosen for the foredeck area.

The owners’ drive to achieve more suited him fine and he says their decisions were spot on. One example is in the galley on the main deck of King Baby. In keeping with the rest of the yacht, it is large, open and has state-of-the-art equipment. The owners had a direct hand in modifying the counter, making it higher and longer to allow for easier plating and serving. Freezers, fridges, wine coolers, even a humidor (located off the main deck), all support the purpose of this boat as an entertainment venue. The owners intend to put the yacht in charter service at some point, says Captain Carter. With her U.S. flag, she will be an interesting option for charters up and down the U.S. East Coast.

The sizeable sun deck and the patterned teak deck on the upper deck. Pictures courtesy of Thierry Dehove and Jim Raycroft.

The four guest cabins below have extra beds so flexibility is built right in. The crew area, accessed through a hidden door from the guest quarters, has a clever sliding door system that provides the crew with a private and well-lit work space to handle laundry.

You can follow the veneer with a finger along the bulkheads; the walnut wood used in this area, which is ample for nine, is matched all around.The captain’s cabin also received special treatment. Adjacent to the bridge, it has a large bathroom with a tub, while the engineer has his own space close to the engine room, an area that shines with stainless diamond plates and beautifully done cupronickel piping.

“This is his my kind of place,” quips Binder, who loves big and bold motorcycles. The cupronickel pipes have matching crimped fittings, common in Germany and other top yachtbuilding European countries but not that widely used in Asian yards, according to Doug Hoogs, who represents IAG in the U.S.

Walnut and marine leather feature in the master suite and guest rooms while a Mercury Super 10 Hurricane outboard is in the guest foyer. Pictures courtesy of Thierry Dehove and Jim Raycroft.

King Baby can actually plane, and Kings says she reached 19.5 knots on sea trials off Fort Lauderdale. Captain Carter is happy with the way the boat performs but admits that, given the top-end fuel consumption, he will rarely run the yacht at that speed, only when he has to. Her two MTU engines with 2,600-horsepower each are able to lift this massive composite vessel, but are also efficient at a speed closer to displacement vessels, at around 12 knots. King Baby’s estimated range at this speed is 3,000 nautical miles. HydroTec worked with the yard on achieving this combination of power and efficiency.

“The [yard] had no idea that the owner was so determined to create such an exceptional boat, but they really wanted to make it happen,” says Marshall, who is working with IAG on other projects. It seems that, inspired by the owners’ tenacity, everyone did. “We had a client who demanded the best in a fun way. He was so enthusiastic to create something special.”

King Baby is true to her inspiration.