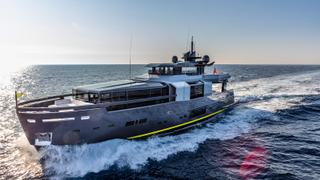 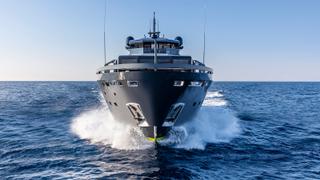 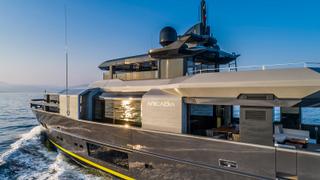 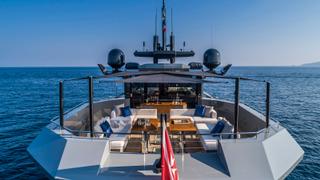 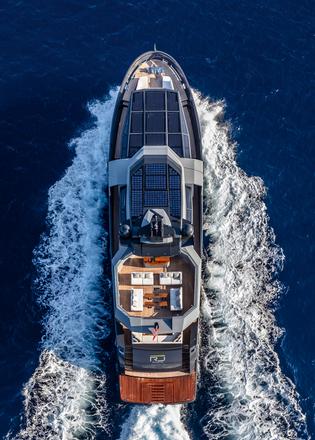 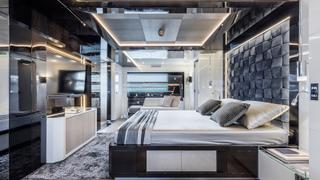 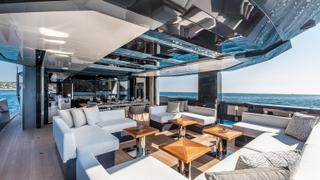 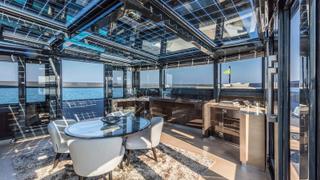 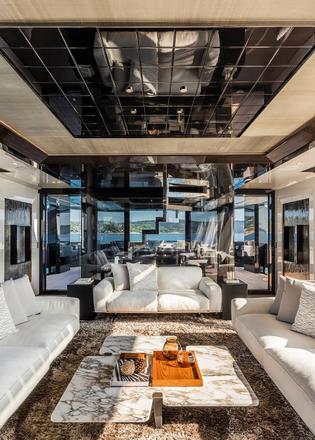 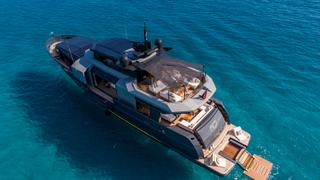 Listen up: On board the silent Arcadia A105

Arcadia Yachts’ A105 is a sight to behold – and its sounds will be music to your ears, says Caroline White...

Sound is the most emotive sensation on a yacht. The whining of a loose gizmo in the engine room can drive your jaw into a tight clench; the clattering of plates in the galley will extinguish romance at dinner, and the late-night rumble of generators can leave you wide-eyed and murderous in your bed.

Conversely, morning birdsong in your cabin, the wash of surf on a beach – these are the reasons that many buy a yacht in the first place. Suitably for a shipyard named Arcadia Yachts, its new A105 dials down the former and ups the latter.

The 31.57 metre yacht is a new venture for Arcadia, which is based on the Amalfi Coast near Pompeii, Italy. The interior was designed in collaboration with Milanese studio Hot Lab, which is working with the yard in an ongoing relationship, and the boat is based on the hull platform for the yard’s successful A100 design.

The exterior design retains its predecessor’s angular, space-age looks – as well as the extensive monocrystalline solar panelling that is Arcadia Yachts’ most distinctive trait.

But the A105 has a more open nature. “The A100 has been studied to guarantee a more enclosed (convertible into open) experience, so we think it can be appreciated in hot and humid markets like the Middle East or Florida – and actually we have some enquiries from these areas,” says Francesco Ansalone, marketing and communications manager of Arcadia Yachts.

“The A105 is much more focused on traditional Mediterranean markets, reflected in the aft deck that is more spacious than on the A100 and the [sundeck] that is the novelty of this model.”

Greater flexibility is also built into the A105’s design, with more layout options available. The owner of RJ, the second A105 and the first to appear publicly, has built three yachts with Arcadia in seven years, so he knew exactly how he wanted to use these options to shape his boat.

The A105 is based on arcadia’s A100 design, retaining its predecessor’s angular, space-age exterior looks as well as the distinctive monocrystalline solar panelling

“The first aspect he addressed was about personal privacy,” says Ansalone. “He wanted to increase to the max the privacy of the owner’s quarters, so with the help of the Hot Lab team, we designed and realised a private stair to access the owner’s quarters [which is full beam and just aft of amidships on the lower deck] without impacting on the total surface of the quarters.”

The staircase, unusually, runs down from the aft end of the main saloon and because it has only one destination, there is no need for a space-wasting lobby – it pops straight out into the starboard seating area in the owner’s suite, which spans more than 30 square metres.

The other guest accommodation is accessed via a separate staircase forward of the main saloon in the lobby, which leads down to a twin and two identical VIP cabins, “to give the same importance to two couples he usually spends some weeks with on board”, says Ansalone.

With accommodation arranged, the owner’s next priority was “to guarantee maximum conviviality, contact with nature and privacy – and isolation from crew activities as much as possible”, says Ansalone. In other words, less of what he didn’t want to see and hear, more of what he did.

Considering the size of the yacht, crew have been given good space to carry out their duties, allowing them to work efficiently and serenely. The two-level portside mess-cum-galley is comfortable enough for a maximum crew of five, with every conceivable cooking device by Gaggenau, including a pizza and bread oven, steam oven and sous vide.

Crew routing is also intelligent: from this hub on the main deck, staff can move unobtrusively down their own staircase – yes that’s a third staircase to the lower deck on a 31-metre yacht – or forward to directly access the games room.

Beyond sequestering and fine-tuning crew operations, the most effective work in reducing unwanted sounds and sensations has been done beneath the surface. “In RJ in particular, we focused on stabilising, designing a system with anti-roll fins of over nine metres in length, with both fixed and electric moveable parts,” says Ansalone. “We also strongly focused on minimising noise from the engine room.”

To improve acoustic comfort they employed “floating” floors and ceilings, and bulkheads made of sound-insulating Laricross and okoume panels. “To ensure the maximum absorption of unwelcome noises, especially at night, the bulkhead that separates the engine room from the owner’s private stairs is soundproofed with glass wool and mineral wool of different densities [to block out a broader range of sound frequencies],” he says. On top of that, the hull – from the bow to the bulkheads of the engine room – is further insulated with an 80-millimetre-thick layer of sound-absorbing expanded polyvinyl chloride.

The solar panels complement this quest for quiet beautifully: on finding a peaceful cove, you can turn off the engines and generators and have the solar panels run the hotel loads in blissful silence. But Hot Lab also carried over some less obvious characteristics from previous Arcadia designs – particularly the expansive exterior spaces.

“So in general you have the impression that you are actually getting on board a bigger yacht than you actually are,” says Enrico Lumini, co-founder of Hot Lab. “When you step on the aft lounge on the main deck of the A85, it doesn’t look like an A85.

“We wanted to maintain the same effect. So we actually pushed forward the limit of the inner main saloon quite a bit in order to obtain almost 90 square metres of free exterior space on the main deck.” Because of this arrangement, when you step on board you find yourself in a sprawling al fresco lounge, shaded by the overhang and with C-shaped sofas that, Lumini says, “can easily seat 20 people with no problem”.

Forward of this is a dining table and woven-backed Tosca Armchairs by Tribù – thanks to full-height sliding glass walls that recede into wings of superstructure on either side, this area feels like something between an inside and an outside space.

The concept continues inside the main saloon, which is entirely dedicated to a sitting room since all-weather dining is taken care of aft. Here, the full-height glass doors that run port and starboard for two-thirds the length of the space slide back, while beyond, the already broad side decks are expanded with sections of superstructure that fold out to create balconies. “It means that basically the main saloon becomes almost 10 metres wide, so a very, very big space,” says Lumini.

To put that in context Volpini 2, which is 26 metres longer, has a beam of just over 10 metres. On the A105 this contributes greatly to an airy, relaxed feeling of being in communication with the surrounding seascape – and that flows from the aft deck, through the saloon and into the highly unusual space in the nose of the bow. This is a position that might more commonly be occupied by an owner’s cabin (and that is one of the layout options) but in this iteration it is a games room with a card table and chic mid-century-feeling Aston “Lounge” chairs by Minotti.

Light streams between the solar panels that cover the glass that runs all the way overhead. Forward there’s a spacious bow lounge that is a nice al fresco counterpart to the games room, for cocktails or a cigar break.

But upstairs is where this boat differs most noticeably from other Arcadia yachts. “Our design of the exterior superstructure was mainly involved in the design of the aft area of the upper deck, which was not present on the previous A100,” says Lumini. “We wanted to create a second exterior lounge and this is a space of almost 40 square metres.”

A staircase from the main saloon pops up in a wheelhouse and interior lounge, which opens up aft on to this capacious space with a wet bar, sofas and hi-lo coffee tables. Grey awnings affixed to removable carbon fibre poles shade a space that really does feel as if it should be perched on top of a much larger yacht.

Four misted-glass skylights down the centre of the teak deck create a geometric design feature as well as spill sunlight on to the C-shaped seating on the aft deck below. It is a bit of a triumph. The indoor lounge is a comfortable nook with windows that slide down for breeze and the bridge has good visibility owing to its position. “We installed the Furuno professional navigation system with MaxSea interface to simplify the skipper’s work as much as possible,” says Ansalone.

“At the same time, it allows the owner and his guests to easily understand the weather conditions to be expected when anchored and when cruising.” They have also installed software borrowed from the aviation industry that, in the case of particularly bad sea or weather conditions, will not only alert the crew but also calculate and suggest alternative routes. Down in the engine room there’s a similarly belt-and-braces approach, with top-of-the-range kit doubled up for redundancy and enough space to both tinker with machinery and store plenty of equipment.

The interior decor that runs through the boat emphasises the connection with the seascape that the design engenders. Pale, broad Flexform sofas invite lounging in the saloon, silky taupe carpets lie on pale coffee-coloured Jumeirah walnut wood floors by Tabu, and white muslin curtains waft in the breeze. Down in the master cabin, a woven suede bedhead picks up the muted tones from the deck above and light floods the room thanks to broad windows. It’s easy to imagine waking up here, moored in some paradise bay, and hearing only the sounds that made buying your boat worthwhile.

Sussurro: On Board the Historic 50 Metre Feadship Yacht

Online Design Challenge Round Three: Each Superyacht in Detail