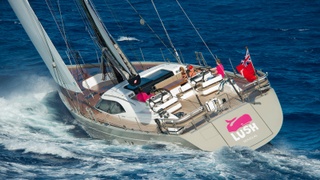 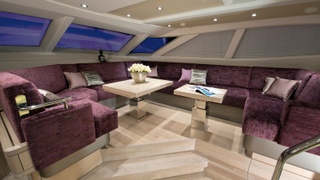 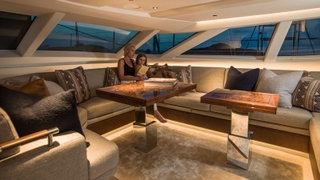 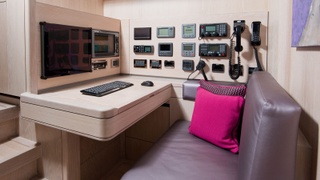 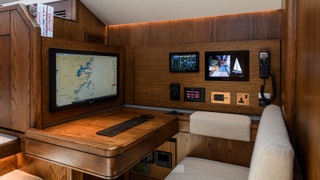 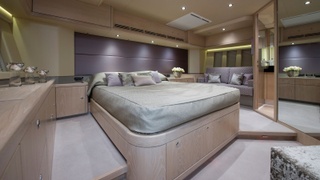 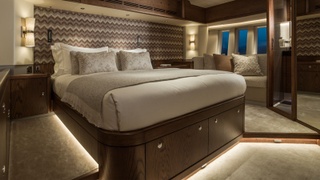 When Richard Hadida bought the 885-01 Oyster-built Lush from his friend, Eddie Jordan, the sailing yacht had already had a pretty full life. From the moment her 27.1 metres hit the water in 2012, Jordan had been off sailing her round the world for two years straight, and from then on Lush had done a further six seasons. “She had quite a lot of miles on her,” says Hadida, who bought Oyster Yachts itself in 2018, “and I wanted to make sure she was appropriate as the flagship of the Oyster fleet.”

For Hadida, this meant a total refit, tackling everything from the paint finish of the hull and interior design, to adding the latest technology and machinery, along with cosy new spaces, to make this beautiful craft as homely and welcoming as she is ready for adventure. As well as a personal passion project, Lush also became the experimentation ground and blueprint for the Oysters of the future. “A lot of the learning from this will be effectively standardised for the new Oysters coming through,” he says. “These super-high-tech systems are going to find their way into the new yachts that we’re building.”

In terms of cosmetic changes, Hadida made the hull a light shark grey, inspired by a similar shade he’d seen on a Perini Navi. “I wanted this glass-like finish,” he explains, “which I’ve got, but it took a lot of extra effort to achieve it – layers and layers of a suitable paint and lots of polishing.” Inside, light woodwork and dark carpets were reversed. “We had the guys sand every bit of woodwork down to raw wood, and stained everything walnut,” he explains, “which looks absolutely beautiful.”

In keeping with the Oyster brand, being environmentally conscious was a priority for Hadida. “We put in a very sophisticated water desal,” he says, “not just for showers and the like but to actually create our own [drinking] water too.” The new system can turn even the murkiest water into still or sparkling on board, “because you never know where you’re going to be with Lush – wherever she drops her anchor, that’s her home”. The boat is also now completely plastic-free, and Hadida is quick to point out that when you own a sailing yacht, “you’re already ahead of the game, as sailing means your carbon footprint is fairly minimal”.

A lot of the refit involved creating clever new spaces to be used by Hadida and his family. The previous Lush had two coffee tables that could be electronically raised to open out into a big dining table – on Hadida’s Lush, the tabletop is now a stunning book-matched burr walnut, thanks to 20 layers of lacquer, which locks into the sofa to form an enormous day bed that can comfortably accommodate eight people to relax and watch a movie, for example.

Workers also had the challenge of housing a new 5.2-metre 200hp Williams Jet Tender, replacing the previous four-metre model. Not only does the upgrade give guests greater freedom in terms of where they want to travel and how, it also has underwater lighting to match the mothership at night.

The tender well at the front of the yacht can now be transformed into an outdoor cinema. “You can have 15 people sat down in this cushioned area, and there’s this little table and lights and there are lounge sleepers all around it – it’s the coolest place on the yacht to be,” he says. “We’ve built a cinema screen that lashes up there so you can just sit and watch movies at night.” The VSAT systems have also been upgraded, meaning there are plenty of movies to choose from on platforms such as Netflix and Apple TV.

Other fun touches include a backlit onyx bar and a 4K camera by the lights underneath the yacht, which attract fish at night. The camera feeds through to both the saloon television and the master cabin, so you get what Hadida terms a “live fish tank”, which shows what’s happening beneath the yacht at all times.

As with any experiment, it’s not all been plain sailing. Hadida struggled at first to perfect the lighting on board. “I wanted it to be beyond amazing,” he explains, “and the first go just wasn’t, so we had to rip that all out and start again.” This meant throwing away a lot of work-hours, and essentially rewiring the whole yacht. “I’ve taken some hits on the chin,” he admits, but explains that the end result was worth it.

Bulwark lights going down the edge of the decking turn on automatically, one at a time, when the yacht goes into “evening mode”. Warm shades of lighting replaced harsh white light throughout the interior, and the yacht was lit with hidden strips behind sofas and key areas, with all light sources completely hidden. Everything is controlled via a Crestron control system, but Hadida was adamant that “there needs to be a button that you can push to find the lights in the middle of the night”, repeating to his team: “If my mother can’t use it, then it’s no good.”

Today, Lush looks “welcoming and beautiful”, and a final tweak comes in the form of an illuminated pink whale (Lush’s emblem), on the bathing platform. “It’s a bit of fun, and it’s great when you’re heading back at night – you can always find your yacht,” Hadida laughs. “Just head for the pink whale!”

Not all changes are for fun – though the Tiwal inflatable dinghy and four e-bikes that Hadida now has on board certainly sound appealing. Lush has a completely new Cummins engine, two new Onan 22.5kW generators, new B&G electronic instruments in place of Raymarine, and the latest tech, including crystal-clear Bowers & Wilkins speakers and wireless charging mats inside bedside cabinets that you can simply place your phone on to charge overnight.

Hadida’s advice to fellow refitters is clear: it’s worth it, but only if the yacht you start with is solid and of a decent quality. “You’ve got to work out whether the original boat is worth the investment, because it’s expensive,” he says, adding that he’s confident all Oysters are. “Anything in the audiovisual world that is around eight years old is going to be behind the times, so if you rip all that out and start again with the latest technology, and you’re rebuilding her, then you’ve effectively got a brand new yacht that can hold its head up anywhere in the world. I think that’s quite exciting.”

As the latest kit is put through its paces, it’s clear Hadida feels it’s been worth the cost and time to get Lush just how he wants it. “I feel the stresses of the world fall away from my shoulders whenever I’m on a yacht,” he says. “But on Lush, I just feel like the king of the world.”

All images courtesy of Mike Jones.