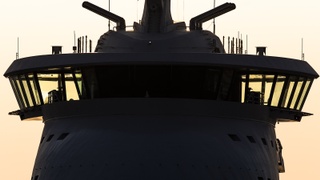 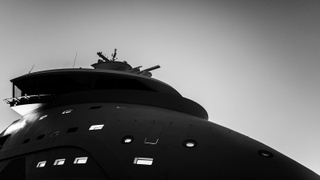 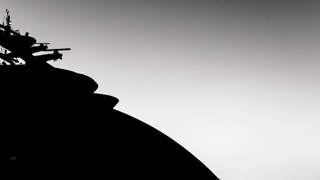 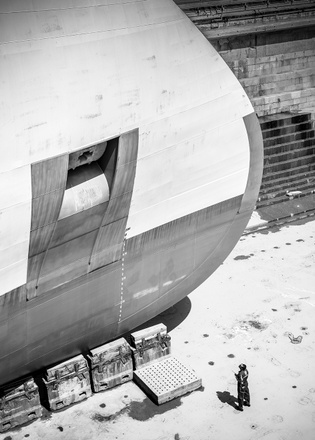 Mystery has long surrounded this radical-looking yacht, but as she nears completion, BOAT International has secured exclusive images and details of her interior.

Designed and built by a Norwegian yard that is better known for commercial vessels, ferries and workboats, Olivia O is characterised by her striking reverse bow and explorer profile.

It is believed to be the first time that Ulstein’s trademarked X-Bow has appeared on a yacht. The design reduces pitching in heavy seas, while piercing smaller waves, and allowing comfort at faster speeds.

Her reported gross tonnage just shy of 5000 makes her one of the roomiest yachts for her 88 metre length, with accommodation over five decks and a bridge perched high and forward.

Designer Espen Øino says that the owner, who is in commercial shipping, initially planned to convert an existing workboat, with diesel-electric propulsion and a single-level engine room. “He came to my office and we started sketching out ideas based on a big empty deck at the back, where they carry gear.

“We had an offer to buy a ready-built 83 metre brand new, but in the end, we decided not to do that because there was a lot of gear on board that strictly speaking you don’t need and would cost a lot to take out.

“So we thought that we’d better design a new platform with Ulstein, built on their existing one – the propulsion and engine room are identical.”

To make the boat more practical for private use, Øino extended the draught at the transom to avoid the sort of slamming that can make tender operations a nightmare.

“It is less optimised for hydrodynamic performance, but takes into account tender manoeuvres. We also raked the bow much more, to make it look quite racy – it is different to the first sketches.”

The bare hull was delivered in 2018 and taken to the Palumbo yard in Malta for painting, fairing and fitting out. “In Norway, bringing in subcontractors to work on the fairing and painting is very expensive,” explains Oeino.

As of November 2019, Olivia O was still in dry dock at Palumbo for interior fit-out by Droulers of Milan. They are better known as interior architects, but have recently worked on yachts including 73 metre Yalla and the owner’s existing 70 metre Olivia.

Nathalie Droulers describes how she produced an orientally themed and primitive interior for the owner’s wife. “The client had a really clear idea that she wanted to start with a Japanese mood.

“We used four different types of wood and tried to combine it in a really Japanese way with borders. Each deck is identified by wood - light and dark on each of the two guest decks, then combined together in the living and dining rooms.

“We have used a lot of metal, because we like the idea of this industrial look of the owner’s ships. Windows have steel borders; corridors have painted metal ceilings.

“There’s no marble in the bathrooms – nothing! We have used something like Italian terrazzo, which is quite a rough material made of cement with a little bit of stone mixed in. Of course, we couldn’t use cement on a boat, but we used a special resin to get the same effect.”

Droulers describes the overarching style as ‘rationalist’, with lots of textures and simple, pale colours. “We wanted to be very sharp. We kept long corridors, because it gives the ship length and dimension. We didn’t want to destroy the essential elements, but we tried to soften parts for easier living.”

Olivia O can sleep up to 20 in eight cabins, including Pullman bunks. “The height of the cabins is 2.70m; they are like hotel rooms,” says Droulers. “They are finished to a very high standard and each one has its own space.” Crew accommodation amounts to 30 people.

There is a small spa that caters for guests rather than the owner. “The clients are very sporty and they live the outside more than the inside. It is kind of a service to the guests, but not big; same with the gym,” says Droulers.

However, there is a bigger cinema room because the family likes to watch movies together, and there is a host of superyacht paraphernalia, including a large swimming pool and a helipad.

There is a sprinkling of Italian designer furniture, but much has been custom built by Merritt in Ohio. “We knew them for a job together in New York. They produce extraordinary quality,” says Droulers.

Nonetheless, she says that the logistics of working with companies in the US and in Germany for installation by local contractors in Malta has been punishing. “It has been a challenge. When they first rang me up, I said, “no thanks” because the scale of the yacht was very large.”

Work is now nearly finished, and the yacht be officially delivered early in the New Year. Olivia O draws 4.4m and has fastest recorded speed of 16.6 knots according to AIS data from BOAT International’s BOATPro.